Nvidia is set to unleash its consumer Ampere GPU powered graphics cards in a couple of months. We have already had quite a few leaks about the lineup, such as the images of the Asus ROG Strix GeForce RTX 3080 Ti at the start of this month, purported 3DMark Time Spy benchmark runs last month, and images of the reference design shroud leaked in early June. As for official Nvidia Ampere news, we saw CEO Jensen Huang take the wraps off the A100 GPU and associated server platforms back in mid-May, from his kitchen.

With new high-end consumer GPUs on the way, and enthusiasts knowing it, it is probably a good idea for Nvidia to wind-down production of its current top-tier Turing-based GPUs and graphics cards. A report published by Chinese tech site IT Home this weekend asserts that is exactly what is happening. 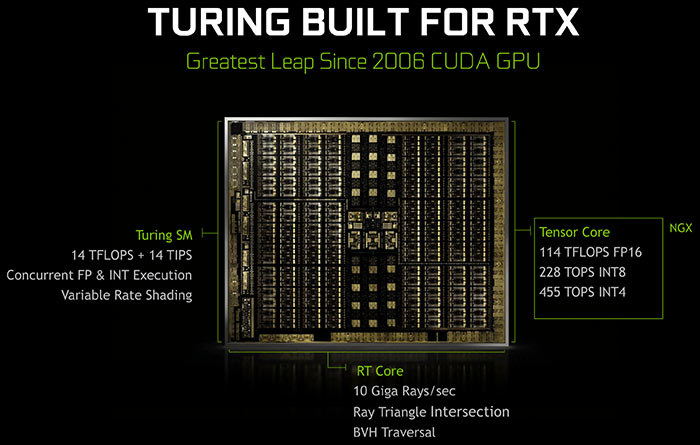 Specifically IT Home says that its sources indicate the "RTX 2070, RTX 2070 Super, RTX 2080 Super, and RTX 2080 Ti have all been discontinued". Production of the cards and their GPU components have been suspended and stocks will be run down. This helps minimise cut-price sales of old stock when the new cards hit the shelves.

Ahead of the decision Nvidia was feeling the squeeze due to several factors, says the source report. It was facing GPU shortages with a difficult mix of high demand from crypto miners, and insufficient output from its supplier. TSMC is rather busy with lots of other contracts and finding/paying-for capacity to boost supplies of older GPUs probably isn't worthwhile.

IT Home reckons that Nvidia will launch its RTX 30 series of consumer GPUs on Thursday, 17th September. Please take the above information with a pinch of salt as even the source says that the accuracy of the information cannot be determined at this time.

Posted by Tabbykatze - Mon 13 Jul 2020 12:14
But the cut price sales are consumer focused to clear stock, so no discounts then? :P
Posted by BigBANGerZ - Mon 13 Jul 2020 12:42
They tend to remove supply rather than discount, its hard to imagine someone buying a 2080Ti in the next few weeks/months but I guess people do.

Anyway RIP Turing probably the most expensive least performing architecture in GPU history, thanks for that Jensen feel free to make up for the lost ground in Ampere.
Posted by fynxer - Mon 13 Jul 2020 13:04
WHAT HIGH DEMAND FROM CRYPTO MINERS!? That's just bull crap, there is no high demand from crypto miners for the RTX 2000 series.

If you calculate anyone of the RTX2000 cards it takes approx 1000 days to just break even from the cost of the graphic card.

Don't know what fantasy Jensen got in his head but no crypto miners in their right head would invest in RTX 2000 series.

Back in 2017/2018 Jensen lied his ass off saying their sales of GFX cards was almost all to games at a time when crypto miners vacuumed the market for gfx cards.

NOW in 2020 when interest for GFX cards from crypto miners is almost nothing Jensen says there is a high demand.

BigBANGerZ
They tend to remove supply rather than discount, its hard to imagine someone buying a 2080Ti in the next few weeks/months but I guess people do.

It's a top end card, which I presume will be cheaper than the newer ones, so some people will stretch to that.
Others will just buy the second hand ones from those who get the latest lot.