HEXUS reported upon the introduction of Nvidia CMP dedicated pre cryptomining GPUs alongside the RTX 3060 crypto mining perf nerf in February this year. At that time Nvidia unveiled four pro mining SKUs, the CMP 30HX, 40HX, 50HX and 90HX, with just the lower-end duo available initially. Now a bigger cryptomining flagship has been spotted for sale at a Dubai-based electronics outlet – the CMP 170HX – and it is available to buy at US$4,500 with discounts available for bulk purchases. 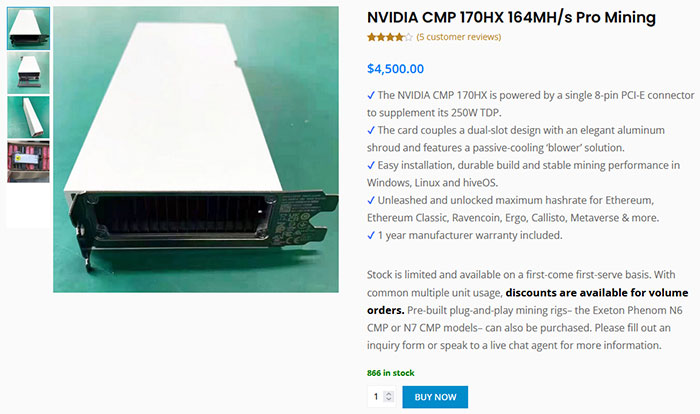 Key specs and features of the Nvidia CMP 170HX can be seen in some of the screenshots from Dubai's ViperaTech above and below. You will observe that the CMP 170HX is quite a compact, thoughtful solution for miners with its dual-slow blower style cooler, 250W operation with need of just a single 8-pin power connector and a quoted hash rate of 160MH/s+.

Looking at the CMP 170HX more closely, reveals that it uses the Nvidia Ampere GA100 GPU, a cut-down data centre cast-off with 70 SMs enabled, resulting in 4,480 CUDA cores being operational. This GPU, which also features 280 TMUs and 128 ROPs, runs at between 1,140MHz and a 1,410MHz boost. The CMP170HX also comes with 8GB of HBM2e memory on a 4096-bit bus, for 1.49TB/sec of bandwidth. As these are definitely not designed as display cards, there are no video outputs, and ViperaTech says they don't support DirectX either.

Remember, the 7nm A100 GPU, was announced back in May 2020 and aimed squarely at AI and HPC computing. You can see previous implementations, as shared by Nvidia, below. 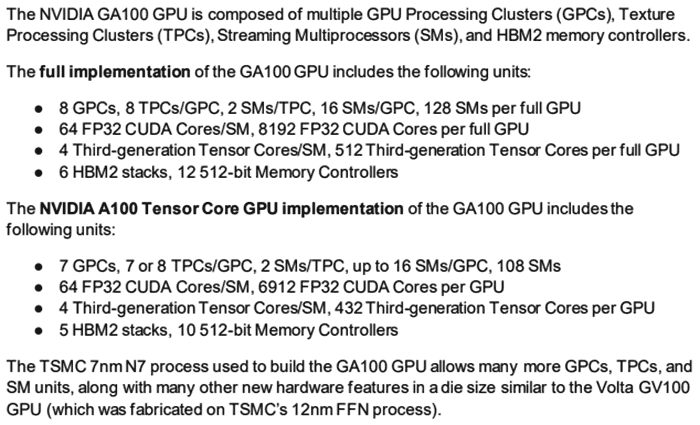 Importantly, the headline hash rate of 160 MH/s+ at >250W offered by the CMP 170HX is highly impressive compared to, say, a GeForce RTX 3090 which can only achieve 110MH/s at 300W or so. In the product pages at ViperaTech you can see an example mining system with eight of these XMP GPUs installed. 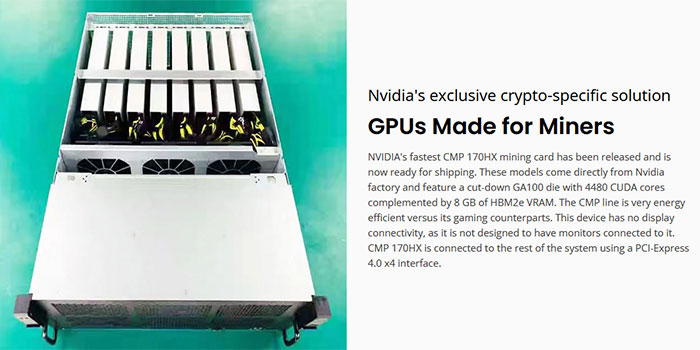 At the time of writing, there appears to be 866 of these Nvidia CMP 170HX cryptomining flagship GPUs in stock. I just refreshed the page after about 30 or 40 minutes and the "first come, first served" stock level didn't move (hmmm) but the price has changed to $4,435.

Good luck grabbing a pair of 3080s for less than £1400, too. FE drops are few and far between and one per household policies seem to be a thing all over, so you'll have to jump through a few hoops to grab a second one, in the unlikely event you can find another.
Posted by Yoyoyo69 - Mon 25 Oct 2021 13:32
I said it when they released the limited cards, this was a likelihood.