The first Nvidia GeForce RTX 3080 Ti graphics card may have just broke cover. VideoCardz claims to have shared an image showing a "next-generation ROG Strix." Apparently this photo came from an internal Asus meeting where new graphics card designs were being discussed. Having said that one would assume this is just one of a number of designs over which attendees stroked their chins. Moreover, it may simply be a computer generated render than a photo of a physical sample, if it is indeed genuine. 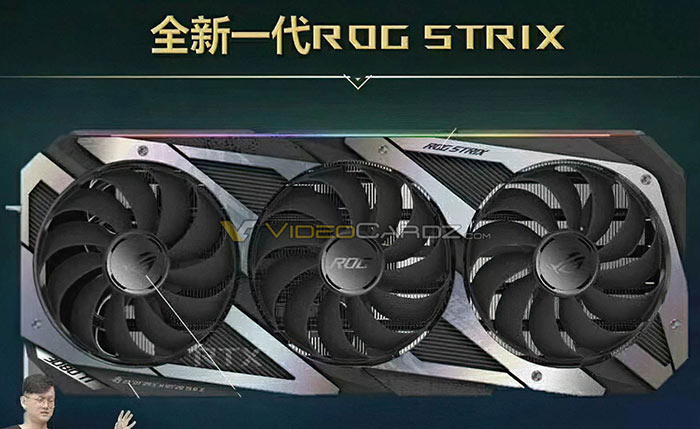 Above you can see the triple fan sample of the purported RTX 3080 Ti from Asus ROG. Its angular riveted on metal overlay makes it eye-catching in a way which I can't say is appealing, just different. To my eyes the textual elements in this photo look a bit fake. For example, the ROG Strix and 3080 Ti lettering is just so small that I don't think any designer would put that on the cooling shroud like that. If this is a 30cm card, then my calculations suggest the 'ROG Strix' text is a tiny 2.5cm long, as is the '3080 Ti' branding, there in the lower left shadow. Summing up, the physical design doesn't set off these alarms for me, just the text elements.

If there is to be a GeForce RTX 3080 Ti SKU, it probably means that the previous talk of an RTX 2090 were simply rumours, but we shall see.

In a complementary piece of news to the above, TechPowerUp reports that Nvidia's Ampere GPUs might be "built almost entirely on Samsung's 8nm silicon fabrication process that's derived from its 10nm node; rather than TSMC's 7nm process". Backing up this rumour, it cites a Twitter leakster with a high Nvidia hit-rate by the name of kopite7kimi. Specifically, Ampere will use Samsung 8LPP for its entire high-end stack, it is claimed.

It's constantly changing!
Posted by Ttaskmaster - Fri 03 Jul 2020 13:37
I gave up caring what these things look like ages ago, especially before actual release when they can still change their minds at the last minute.

If I get one, it's getting all that gubbins ripped off and a waterblock slapped on it anyway….
Posted by Yoyoyo69 - Fri 03 Jul 2020 13:53
I would imagine a RTX 2090 is actually a product created as a backup, last thing they want is to do an Intel (have the chance to kill any competition, but instead, even years after the competition have announced their intention, have nothing - NOTHING)
Posted by Spank - Sat 04 Jul 2020 00:16
Don't care what they look like at the mo, just want to know how much 3080's will cost
Posted by DevDrake - Sat 04 Jul 2020 15:11

Spank
Don't care what they look like at the mo, just want to know how much 3080's will cost