The latest iteration is suffixed Work The Frames, whose WTF initialism brings other thoughts to the fore. Designed as imposing solutions for RTX 2070 Super and 2080 Super, the focus is on heft, cooling, lighting, and near-silent gaming.

Whereas the reference card is a study in design restraint, the WTF takes the opposite tack, favouring size over elegance. Measuring 314mm long, 132mm wide and 53mm thick, it's effectively a three-slot behemoth weighing in at 1,168g.

Overall aesthetics are fine if you're into the boxy look, and there's enough room to house three 90mm fans that don't switch on until 60°C. KFA2 ties the left-hand two into one sensor, and the right-hand into another, and both sets can spin at (slightly) different speeds. There's a smooth transition between off and long-term speed - no jerky behaviour or sudden spikes - and such is the cooling that, in our test platform, it takes around 40 seconds after a game has loaded for them to even bother spinning at all. 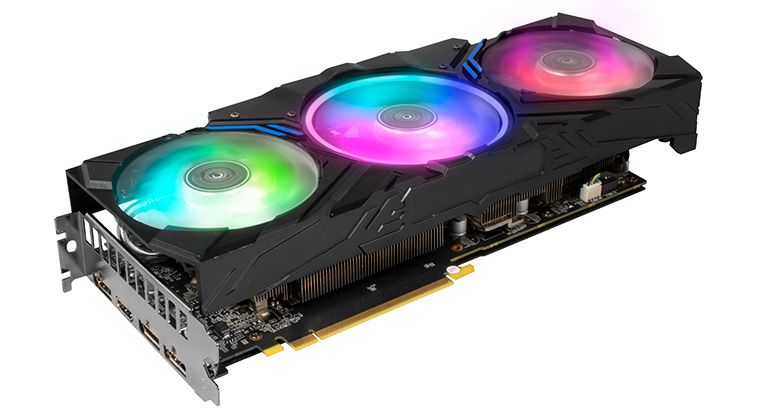 RGB illumination is a key selling point. It's bright, especially on the ringed central fan, while even spacing of LEDs within the hubs leads to consistent light through the 11 diffused fan-blades. The optional Xtreme Plus software, optimised for the WTF cards, enables per-fan RGB lighting and patterning of various brightness levels.

There's also explicit colour control over the 'Work The Frames' logo and the two flanking diagonal dashes on each side, again with varying brightness levels, as well as plain off, and one really needs to have this card vertically mounted into a chassis for maximum effect.

That said, the focus on lighting means that some bits have been overlooked. We'd prefer proper covers over the SLI fingers, a more enclosed shroud - it looks somewhat odd floating above the PCB - and a hardware switch for a second BIOS. KFA2 gets around this by having a one-click OC mode, though it's only active when the utility is loaded.

Coming in a while after the initial slew of cards, the WTF series uses a custom PCB housing a 7+2-phase supply. The card-wide cooling is also robust, housing thick heatpipes across the entire width and giving the card its additional height. The PCB and cooling combination enables the 2070 Super WTF to increase frequencies to 1,815MHz boost, up from Nvidia's 1,770MHz, though we reckon KFA2 is still too conservative. The aforementioned software OC inches up the core clock to 1,830MHz boost but does nothing for the 8GB VRAM operating at 14Gbps.

Good news is that cooling focus pays off handsomely. Our sample card, run at its out-the-box settings, locks on to a 1,905MHz boost speed and stays there, without fluctuation, in all benchmarks. Meanwhile, the one-click OC increases the power target to 111 percent and homes in on a 1,920MHz boost speed, all without troubling the ears, as you will see later on.

As an extra visual touch, done pretty well, there's an RGB-infused plastic backplate that's itself does a decent job of pulling away heat from the underside. An infra-red thermometer shows the backside temperatures peaks at 62°C when the card is under the pump. Our review model features an additional plastic brace which connects to the upper shroud ostensibly for extra rigidity.

KFA2 does keep to some reference specifications, however, as the card is plumbed with 6-pin and 8-pin power connectors and, by default, harnesses a matching 215W TDP. The practicality is that a decent 600W PSU ought to power the card and a decent system built around it. 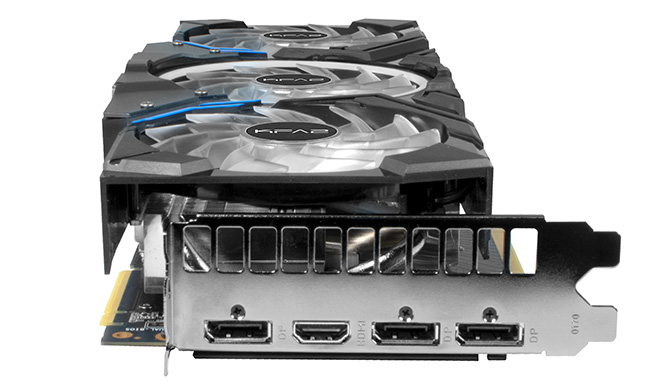 Partners tend to do their own thing with outputs, and that's the case here as the KFA2 card drops the USB Type-C of the reference model. We'd rather have it in, of course, yet very few AIB cards do.

The decision to go big on cooling, size, and RGB manifests with a £570 street price, or about £50 dearer than the cheapest cards based on this GPU. Most have very similar performance levels due to near-identical boost speeds on the core, but with an extra twist, we're reviewing this card on the brand-new AMD Ryzen-powered test system for 2020. Let's now see where it stacks up.