At the time of writing Nvidia is yet to announce its consumer graphics cards based upon the new Ampere GPU architecture. We don't have an official date for the release of such hardware. However, there are plenty of pointers to a September 2020 launch, alongside Cyberpunk 2077. Most assume the new graphics cards will be called the Nvidia GeForce RTX 30 series.

Over the weekend some rather extraordinary pictures emerged, claimed to be of an upcoming GeForce RTX 3080 graphics card. A ChipHell forum user shared multiple shots of a graphics card bearing that name and most importantly we got to see both sides of the card, as it has a special design which is quite a departure from the 'norm'. 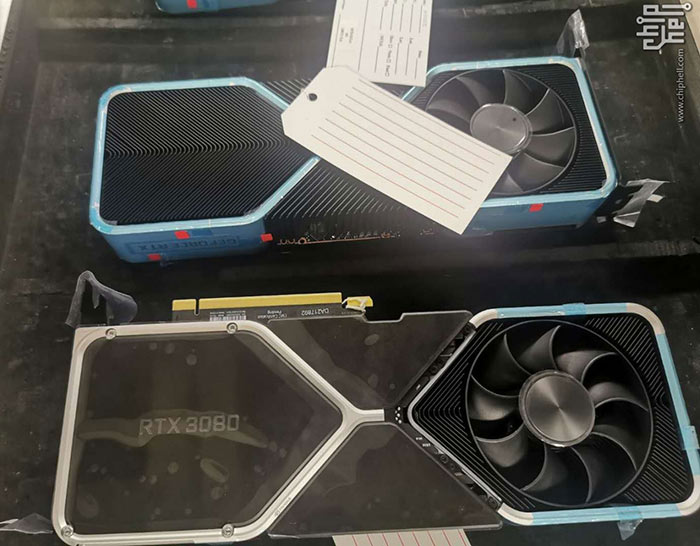 As you can see above the RTX 3080 design sports a cooler with fans on both sides. Looking inside a PC with one of these installed there is a fan near the bracket pointing left, then towards the end of the card a fan points to the right. The card's structure is such that the first fan cools the PCB directly, but the second one on the other side of the cooler sits beyond the PCB area, and in some negative space left by the pennant-shaped PCB. Angular metallic cooling fins fill in areas of the design not obstructed by the PCB itself.

While the pennant shaped PCB might sound outlandish, Nvidia has previously used a PCB with a large segment cut out for the sake of its reference cooler design. The design was embraced by many AIBs too.

The leaked images don't give us a clear shot of the thin edges of this design. There are some oblique angle shots showing the top of the card, but none show the array of outputs, or the power inputs. Since they aren't situated at the top edge one must assume power connectors come off the back, as per some wireframe sketches shared at the same time as the photos.

We don't know if these are the final designs Nvidia is using for its reference cards, and it is possible the shipping product might be somewhat different to the cards we see here today.

Before we go, some talented 3D artists have taken the leaks and run with them, producing some great looking renders of this design for you to ponder over. I've embedded an animation created by Amigo Designs above, and an image from one of several shared by JDSP, below.

Story via Chiphell, VideoCardz, and thanks to News@Tip for the alert.

There are 2 fans, one either side, not sure if that's what you meant or not
Posted by kalniel - Mon 08 Jun 2020 12:08
Very interesting. Sort of hybrid blower. Having an intake on the top side (in an ATX case) might be problematic though, both for dust and CPU heat reasons.

Oh and it's blatantly crying out for heXus branding!
Posted by Tabbykatze - Mon 08 Jun 2020 13:59
Gonna be honest, it feels fake mainly because the cooler doesn't really allow Nvidia to pursue their narcisstic self marketing on their products.

And it looks like the designer has chosen a blower type design but they're using axial fans.