According to Nintendo's Japanese website the entire 3DS line of handheld consoles has been discontinued. The web pages for the new 3DS LL, new 3DS, new 2DS LL, and 2DS are still live but clicking through to the product pages reveals they are 'out of production'. Furthermore, a message on the main handheld series page says that production of this product line has been discontinued. Oddly, Nintendo hasn't made a supporting official statement about the change via PR or investor relations channels - the web page status changes were only noticed by the Twitterati earlier today. 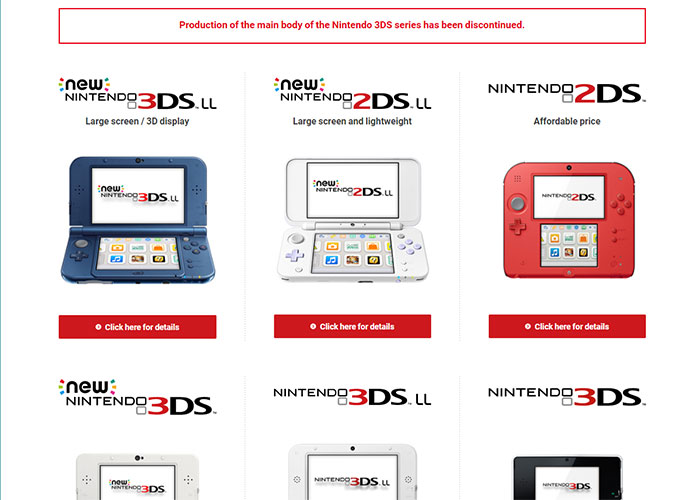 Tech and entertainment site The Verge reports that the Nintendo US site doesn't mention the discontinuation of the 3DS line - instead the editors state-side seem to have preferred to wipe all mention of the 3DS from their portal over the last few hours. The only remnants of 3DS information now live in the support section, alongside info about the likes of the Wii U.

Nintendo announced the 3DS way back in 2010 and it became available in 2011. HEXUS confirmed the UK price and launch date for the portable packing 3D visuals in January 2011, and it even featured as one of our Epic Giveaways in February the same year. Sales weren't stellar to being with but soon picked up with the release of Super Mario 3D Land in late 2011.

Since 2011 there have been a number of 3DS revisions including larger models, models without the 3D visual effect, and other permutations. To date the 3DS series (including 2DS) has sold 75 million units, which is fewer than half its predecessor, the original dual-screen Nintendo DS. However, as The Verge points out, solid 3DS software sales have helped Nintendo through some rough patches, for example the lean Wii U years.

Nintendo's new sole focus is on the Switch line which recently ventured into dedicated handheld territory with the Switch Lite with its captive controls (no dock, no TV mode, no tabletop mode). In May the Switch passed the 55 million sales milestone and it has been in high demand during the pandemic. Last month we got a solid indication that a major Switch revision was on the way as insiders said that a 4K Switch console was being prepared for 2021 release. With the 3DS out of the way we might see Nintendo develop Switch Lite portables further too.

Posted by cheesemp - Thu 17 Sep 2020 12:46
“In May the Switch passed the 55 million sales milestone and it has been in high demand during the pandemic.”

Yes I had just noticed that. Had my switch powered off for so long and just noticed I can sell it second hand for 80% of the value I paid for it second hand soon after launch. Guess it's time to sell!
Posted by richard1577 - Mon 05 Oct 2020 11:59
we was established in January 2008. Our main focus is to offer quality office furniture and office chairs with fast and friendly service.
Posted by Ttaskmaster - Mon 05 Oct 2020 12:52
Hopefully be able to get a New 3DS XL second hand for a decent price soon, then!