Last month we saw LG herald the gaming qualities of its newest 48-inch 4K 120Hz OLED TV with G-Sync compatibility. It was just the latest entrant to the series, complementing the existing 55, 65, 77 and 88-inch models in a more gaming den-sized form factor.

Of course LG and Samsung are very fierce rivals and it looks like LG's proclamations and resulting coverage have prodded Samsung into some awareness-raising of its own gamer-friendly modern (2019 and newer) QLED TV sets. Today Samsung published a new infographic which distils the key qualities of its current QLED TV lineup, with an eye on the desires of gamers. 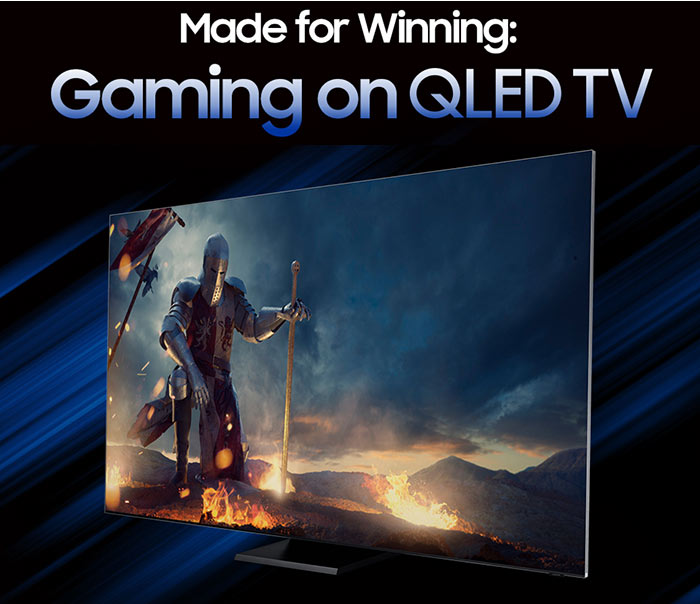 Like LG, it seems that Samsung has its eye on the capabilities of the next generation of consoles, like the Microsoft Xbox Series X, and Sony PlayStation 5, as much as people who game on PCs using big screens.

Samsung claims its newest QLED TVs are optimised for "more immersive and responsive gaming sessions". With consumers increasingly careful in considering gaming capabilities of TVs to narrow down their buying choices, this is a wise move. Samsung trumpets the following ke features of its new QLED TVs that will appeal to gamers:

Another feature worth highlighting with Samsung's latest and greatest QLED TVs is the 'Multi View' capabilities. This screen splitting function allows you to game on one side of the screen and follow a favourite streamer on the other, for example.

At the start of June HEXUS reported upon the impending release of the Samsung Odyssey G7 Gaming Monitors. A couple of days later Samsung officially launched the 27-inch Odyssey G7 monitor and 32-inch Odyssey G7 monitor, with immersive 1000R screen curvatures, QLED technology, and refresh rates up to 240Hz. You can see the G7 promo video below.

I wonder what the average response time is and what, if any, sacrifices have to be made to achieve those kinds of response times.

Really wish it was possible to push this as an update to their QLED range. We paid quite a good chunk of money for our Samsung in 2018 and already it's feeling obsolete.
Posted by Jedibeeftrix - Wed 10 Jun 2020 10:06
in all this marketing bull i'm struggling to identify tv's are included in this gaming brand, or, how Jo public will be expected to recognise a samsung ‘gaming’ TV when they walk into Curry's…
Posted by bonesd69 - Wed 10 Jun 2020 11:33
It looks like Samsung's 2020 models are a downgrade compared with 2019 (from TV reviews by professional TV calibrators). They decided (pre-covid) to make their 2020 8K TVs their premium range. A risky strategy that looks like a big mistake now. So not surprised the marketing bods are desperately looking at ways to shif their TVs. Too late though. LG stole on a march on them with their upcoming 48 inch OLED model (collaborating with Nvidia).
Posted by philehidiot - Wed 10 Jun 2020 17:33

I wonder what the average response time is and what, if any, sacrifices have to be made to achieve those kinds of response times.

Really wish it was possible to push this as an update to their QLED range. We paid quite a good chunk of money for our Samsung in 2018 and already it's feeling obsolete.

The goal of the marketing team is to make you feel really good about purchasing something new and really bad that you purchased it a few months later. The only time you'll ever hear them talking about the problems with their product are when they've replaced it with something better and are using it as a comparison.