Twitter PC hardware leaks specialist RoGame has unearthed some Ashes of the Singularity (AoTS) benchmark runs, which appear to have been run on a PC system packing an Nvidia GeForce RTX 3070 graphics card. Interestingly he has a matching set of benchmarks run on an Nvidia GeForce RTX 3080 graphics card, which he asserts were completed by the same users, with the same setup. If this is true then the comparison will be a nice A/B with the GPU being swapped out, and give a good indication of the comparative performance - at least in AoTS. 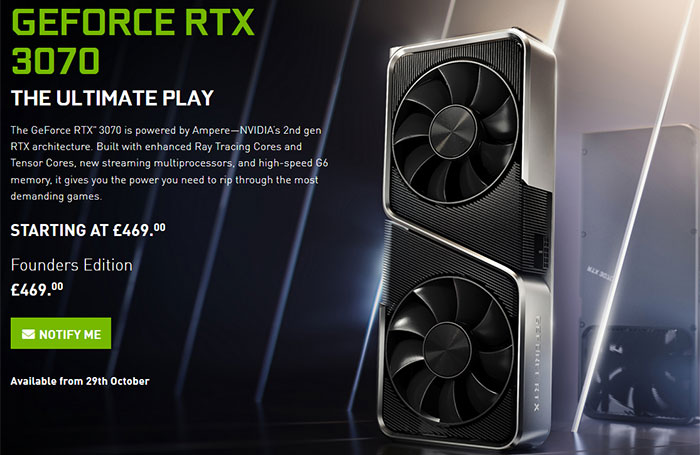 At the time of writing RoGame's link to the AoTS database shows up eight results emanating from three users of this benchmark. The Twitter tech leakster subsequently decided it was a good idea to mix in some Nvidia GeForce RTX 2080 Ti graphics card results, as after further digging found some from the same user, again said to be using the same setup - varying only the GPU. I've tabulated that fuller comparison below, with the RTX 2080 Ti set as the baseline:

From checking out the benchmark details page the user that was the source of the above table appears to have been using an Intel Core i7-9700 CPU (8C/8T) powered PC with 16GB of RAM. AoTS results don't go deeper than that on the platform hardware used. Pondering over the chart it is quite plain to see that the new Ampere RTX 3070 performs very closely to what one might expect from the Turing champ in AoTS. As we move into the RTX 30 generation the other comparison will be more relevant to some - Nvidia's $499/£469 Ampere graphics card is only 10 to 15 per cent behind the $699 (£649) GeForce RTX 3080.

During the GeForce Special Event in early September we were told the key specs of the RTX 3070. When Nvidia went public with the news that it was delaying the card's availability, until 29th Oct, it also shared an interesting gaming comparison performance chart which you can see below (click to zoom). 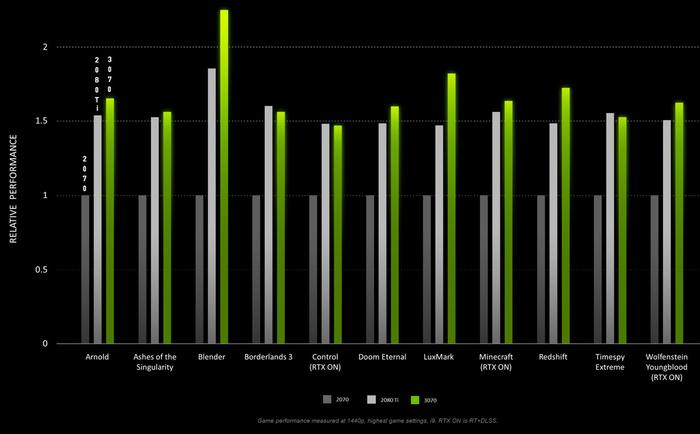 Next Wednesday AMD launches it first crop of RDNA 2 graphics cards for consumers, and Nvidia follows up the day after with the RTX 3070 hard launch. Please stay tuned for the news and reviews.

Posted by globalwarning - Thu 22 Oct 2020 17:06
Sooo…. NVidia basically has one GPU that they bin for being a bit slower (3070) and a bit faster (3080)? Seems like this would be the sweet spot, probably runs significantly cooler and less power hungry than the others, with a significant amount of the performance. Anyone want to take bets that they won't meet the demand?
Posted by Iota - Thu 22 Oct 2020 17:17

QuorTek
so all that bought 2080ti, for insane amounts of cash, got reared?

chj
Yes. If people were willing to spend that much for a 2080ti then surely the onus is on them, doubly so if they bought one in the last few months.

Not really, they had two years of that performance level, which is what everyone will be catching up to.