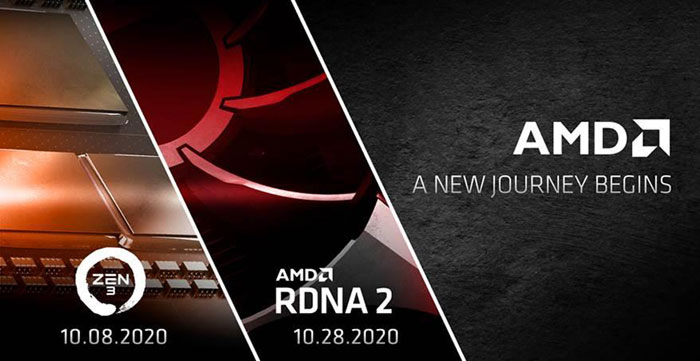 AMD Ryzen processors are going to take another step up the performance ladder with the Zen 3 architecture. A portfolio of "high performance computing" products will be unveiled at this, the first of the two AMD events in October. So far little is officially known about Zen 3 and this announcement and teaser trailer don't change that fact. The last solid info we got about Zen 3 was back in June, from an investor presentation, which confirmed that Zen 3 would be produced on 7nm, more specifically TSMC's N7P process.

AMD CEO Dr Lisa Su Tweeted her fanfare to an exciting October for gamers and included a Zen 3 announcement trailer. In the email we received she added the following statement; "We are incredibly excited to invite you to learn more about the next wave of Ryzen desktop processors with 'Zen 3' architecture, taking our PC gaming and content creation leadership to new heights."

AMD has confirmed that the next gen RDNA 2 architecture Radeon graphics cards will be dubbed the RX 6000 series. Again there isn't much meat in this announcement and teaser trailer video. All we are promised is "a breakthrough gaming architecture" which will be coming to both PCs and consoles – the RDNA 2 graphics architecture.

In our email we got a little more detail, with AMD saying that it has been in "deep collaboration with game developers and ecosystem partners ," to make sure RDNA 2 delivers, and it will form "the future of Radeon PC gaming".

edmundhonda
If Ampere comes down at anything like the price/performance nVidia are claiming, I'm not sure it matters when AMD start talking about RDNA2.

If they manage a much better performance per watt some will be interested - and the jury is still out on that
Posted by QuorTek - Wed 09 Sep 2020 22:18
I guess this is the Reason why Jensens Nvidia guy want us to upgrade from out 10XX to 30XX at once… I am really curious what AMD has to offer now… especially since game developers work on AMD equipment in the Consoles, so well it is gonna be inherited to more hardware acceleration than being dependent on slower software?