The Nvidia GeForce Special event, live from CEO Jensen Huang's kitchen, has just concluded. It was all about the new GeForce RTX 30 series of graphics cards and associated technologies. The event started with a broad introduction about the progress of computer graphics over the last 21 years, especially in gaming - tying in with the #UltimateCountdown PR campaign that has been running for the last 21 days. 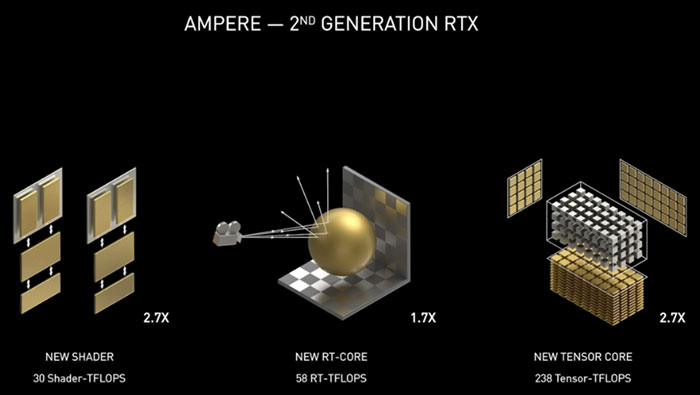 Computer gaming is big business nowadays, bigger than ever, and the growth of eSports has been phenomenal, noted Huang. However, he wasn't going to talk about budget eSports systems and components, instead he pointed at the high end professionals where milliseconds matter. Reducing latency is so important and can make all the difference to pro gamers so they will be highly motivated to buy into the best graphics cards to gain some edge. 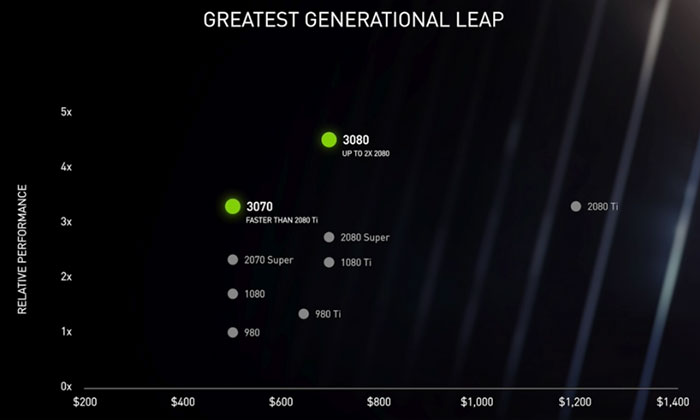 Still on the general topic of gaming, Huang delivered a collection of gaming industry and technology announcements, which I have summed up and bullet pointed below, in the order they were presented, as I watched the stream.

About half way through the presentation Huang finally got to the hardware reveals. He revealed the GeForce RTX 3080 first as the flagship new generation RTX Ampere GPU for consumers. As an aside to the camera, after showing various performance slides comparing the RTX 30 series with older GeForce cards, Huang addresses Pascal GPU (GTX 10 series) owners "it is safe to upgrade now," he asserts… Click the slides below to check out the key specs of the GeForce RTX.

Huang then moved onto the GeForce RTX 3070. This graphics card is described by the Nvidia blog as the "sweet spot" for many. In particular this GPU is claimed to be "faster than the $1,200 GeForce RTX 2080 Ti — at less than half the price." You can see this claim in the charts I've reproduced. 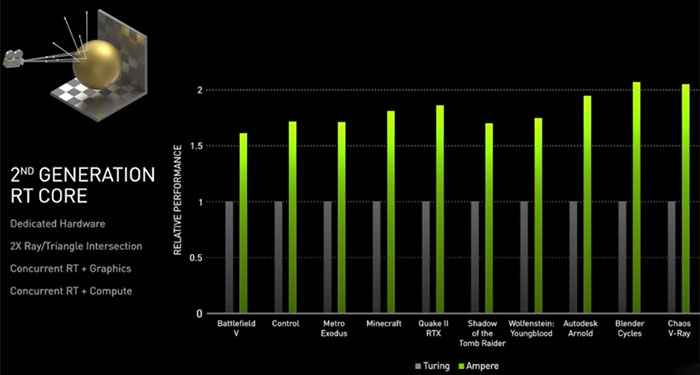 Last but definitely not least, Huang took the wraps off the GeForce RTX 3090. Yes it is a Titan replacement and thus not the 'flagship' card of this generation. However some people could choose it with it being touted as ideal for both gaming and creation. In terms of gaming the RTX 3090 is said to be the first consumer graphics card capable of playing games at 60fps in 8K. Compared to its predecessor it is up to 50 per cent faster at 4K, and its new cooler makes it up to 10x quieter with the GPU up to 30 degrees C cooler too. 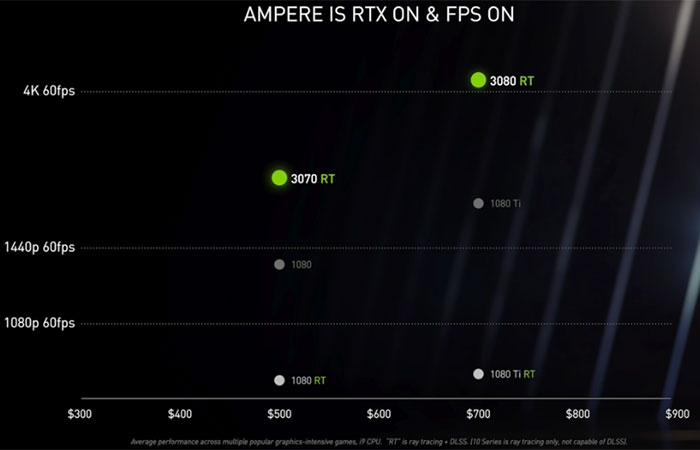 The first of the above graphics cards out of the door is the flagship GeForce RTX 3080 and thus it will be the first to be put under scrutiny in our labs. Partner card announcements should be coming very soon, and it will be interesting to see their offerings and pricing.

Benchmarks will be key, im going to resist pre-ordering I think and wait for them first. The price gap between the 3080 and 3090 is huge, and they did heavily lean into the 3090 being a Titan style card, so we'll have to see. Hopefully it will be, as I dont want it to have another 1/4 or more performance on top of the 3080 or else i'll probably buy one :(

The lack of a price increase is the most interesting thing here though, (compared to RTX gen one, I am fully aware of how much they pushed the prices up that gen! Classic sales technique eh). Should make november really interesting!
Posted by CAT-THE-FIFTH - Tue 01 Sep 2020 19:25
I put some additional information into this thread:
https://forums.hexus.net/pc-hardware-components/420403-nvidia-ampere-livestream-event.html

It includes some technical specs,a DF hands-on video and AMD's response on Twitter!
Posted by w1ntergr33n - Tue 01 Sep 2020 19:38
Definitely need to wait for some benchmarks compared to AMD's upcoming cards as well