HEXUS has already reported upon the Nvidia GeForce RTX 30 reference models, and reported upon the designs with which Asus ROG will approach the market. Our in-box is heavy with press releases from companies big and small, hoping to produce popular and newsworthy designs with which to tempt you. There are so many new designs it is hard to give proper coverage to them all but if you keep an eye on the HEXUS press releases section, they should eventually filter through. At release time we will be of course reviewing a choice selection of RTX 30 series GPUs too. In the meantime, I'm going to summarise my RTX 30 series highlights, as per the headline.

Gigabyte / Aorus have provided a first look video showcasing its initial salvo of GeForce RTX 30 series graphics cards. I've embedded that directly above and it shows a cool looking OLED display on the GPU shroud. Like the Asus story from earlier today the video content focuses upon the coolers that have been designed to tame the RTX 30 GPUs.

If you head on over to the Gigabyte Nvidia graphics cards product pages and filter for the RTX 30 series you will be presented with a product portfolio of eight cards. These are all RTX 3090 and 3080 cards for now (four of each) and also split by four per each brand. 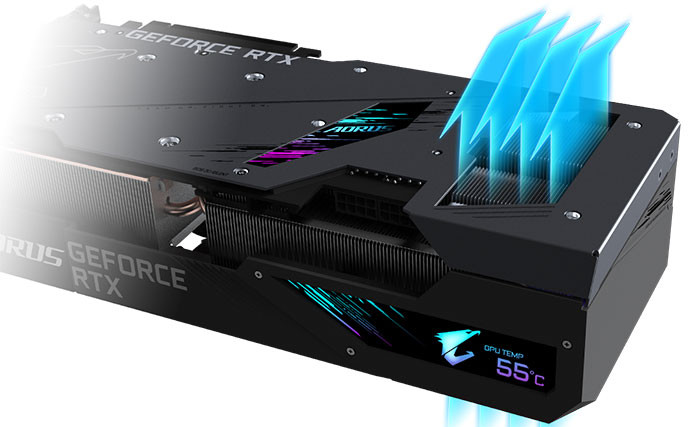 Checking out the Aorus GeForce RTX 3080 Master 10G, for example, I see that the specs page is very sparsely populated for now. All we see is the GPU inside and how many CUDA cores it has - the same as reference of course. This will be a familiar theme throughout this roundup - minimal specs revealed - so I won't mention it again.

MSI has provided a blog post and insider video about its new GeForce RTX 30 graphics cards. It has 14 new products based around the GeForce GTX 3090, 3080 and 3070 GPUs - six Gaming Trio and eight Ventus series cards. The Ventus range mixes up x3 and x2 coolers but the x2 coolers are exclusive to the RTX 3070 series which will be less power hungry. 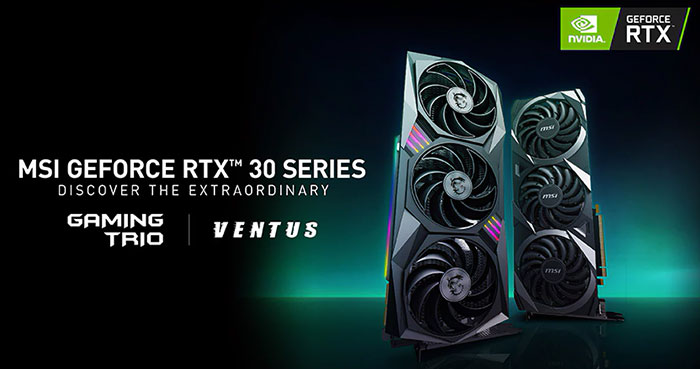 EVGA has announced its GeForce RTX 30 series which will feature EVGA iCX3 cooling technology. Again this firm talks as if it decided on the cutouts in the PCB design, dubbed 'Air-Through PCB', (and backplate) but everyone will have inherited this from Nvidia. In other cooler specs we see the new EVGA designs will use; micro-thin heatpipes, a unified copper block for GPU and memory, through-hole heatsink fins, an HDB 2.0 0dB noise motor fan, an asymmetry fan arrangement and design, and aRGB LEDs. 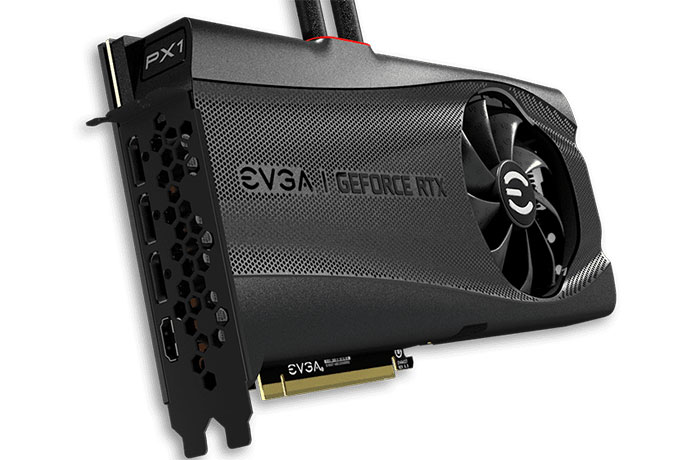 On his Twitter feed Jacob Freeman, the Global Product Management Director at EVGA, shared some more tasty details of GeForce RTX 30 products to come. He published a photo of the FTW3 Hybrid card with 240mm radiator and RGB fans. Furthermore, Freeman stated that a KingPin version was on its way too.

Inno 3D wrote to HEXUS about its upcoming GeForce RTX 30 series cards. It listed nine products based upon the RTX 3090, 3080 and 3070 GPUs in its email. These products use the iChill x4 and iChill x3 coolers at the higher end, with cards lower down in the pack sporting the Gaming x3 and Twin x2 coolers. 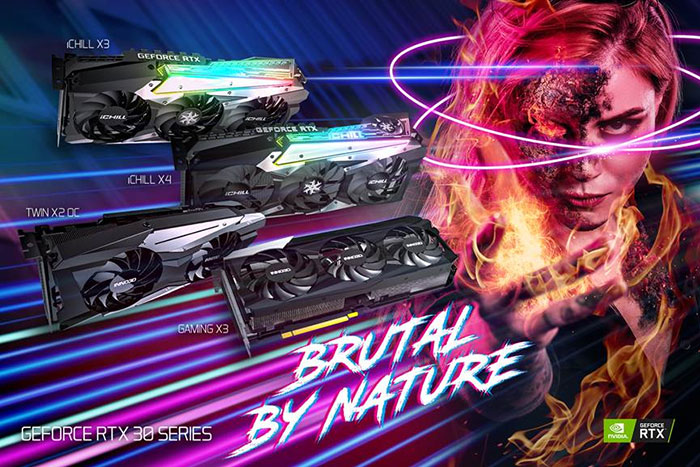 Like other players, Inno 3D talks a lot about how it has improved its cooling shrouds. In particular it highlights its use of multiple copper heat pipes, and its Scythe blade fans with asymmetrical layout. Read more about the individual Inno 3D products on these official product pages.

Palit has five new GeForce RTX 30 series products to show off at the time of writing. They all look remarkably similar, from RTX 3090, 3080 to 3070 with what appears to be the same triple fan cooler - but they are all dubbed 'GamingPro' models. 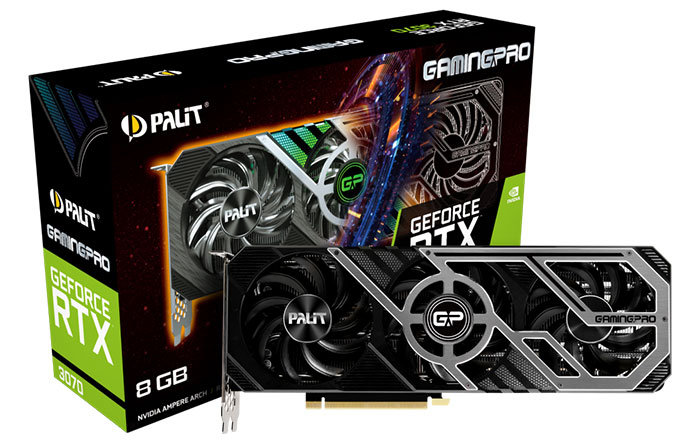 Interestingly Palit shares the full specs of its cards with base and boost clocks, memory clocks, and so on available to peruse. I've screen grabbed a comparison table showing all that data and it is reproduced below. The RTX 3090 and 3080 OC models are just 30MHz faster… 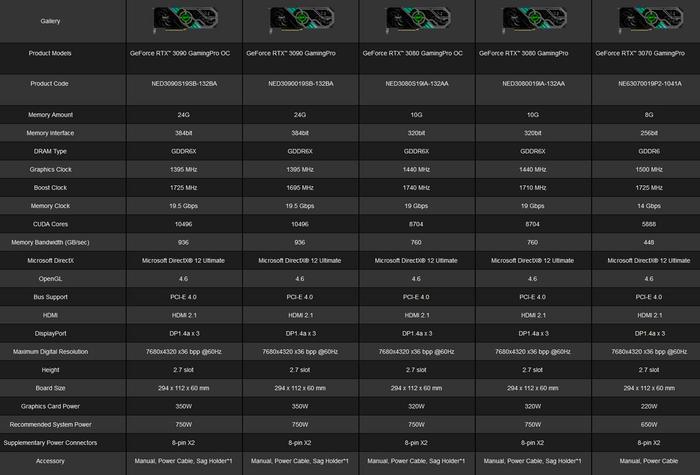 Posted by cptwhite_uk - Wed 02 Sep 2020 14:51
Pretty sure I'm going to get myself an RTX3080 launch day, so long as the foudner's edition comes in at £649. Never paid so much for a GPU before, but it seems like pricing will hold well, at least until AMD launches RDNA2 and we can see what that brings, even if it can best it on perf/£ I can't see it getting outright performance much beyond what the RTX3080 is purporting to achieve. Digital Foundry's video showing relative performance to a RTX2080 gives me confidence the number of + 80% performance jump are generally correct though.
Posted by 3dcandy - Wed 02 Sep 2020 15:21

cptwhite_uk
Pretty sure I'm going to get myself an RTX3080 launch day, so long as the foudner's edition comes in at £649. Never paid so much for a GPU before, but it seems like pricing will hold well, at least until AMD launches RDNA2 and we can see what that brings, even if it can best it on perf/£ I can't see it getting outright performance much beyond what the RTX3080 is purporting to achieve. Digital Foundry's video showing relative performance to a RTX2080 gives me confidence the number of + 80% performance jump are generally correct though.

3dcandy
I can't see launch day being so cheap to be fair. Plenty of people saying availability is going to be truly horrendous and they have been pretty much on the money with the other stuff they have revealed

Should be OK direct from Nvidia I'd have thought, and I'd take that one over an AIP for sure.

We don't know what yields are like, true, but seems like the 3080 can be made from chips with a lot of defects given the specs compared to the 3090 which is the same die.
Posted by 3dcandy - Wed 02 Sep 2020 15:33
Aye I agree with both above. Saying it will be £649 and actually getting one ON LAUNCH DAY for £649 is different. I am hearing that availability will be poor - yup it should be £649 but we shall see if you can buy one on launch day. Pre-order maybe….