Asus has announced its initial range of GeForce RTX 30 series graphics cards. It will add Ampere GPUs to three ranges that you will be familiar with; the ROG Strix, TUF, and Dual product lines. Asus says its 'buffed up' designs for the Ampere architecture include "buffed-up cooling, PCBs, and power designs."

Starting at the top, Aus ROG Strix cards feature a new shroud with triple axial fans. Asus says the central fan has a full-height barrier ring and 13 fan blades to boost static pressure and drive air though the heatsink, while it is flanked with 11-blade fans with half-height barrier rings to encourage lateral dispersion and to provide better airflow through the cooling array. Asus tames turbulence using alternate rotating fans. PWM fans are used so they can be tuned and controlled, responding to various workloads. A dual-BIOS lets users quickly change between quiet and performance modes too - without software. 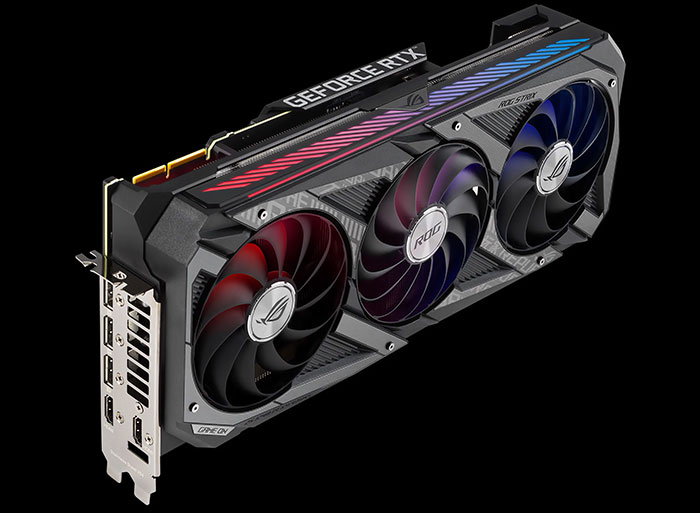 These are 2.9 slot designs with the larger footprint taken up mostly by a larger heatink. Under the heatsink the heatspreader is polished with MaxContact technology, which improves smoothness at the microscopic level - to optimise thermal transfer.

A customisable RGB element is on the front side of the GPU, nestled under the Strix's reinforced metal frame. Round the back you will find a metal backplace with vent. The venting seems to correspond to the FE model 'V' cutout but Asus says it put it there to allow hot air "to escape towards chassis exhaust fans instead of being recycled back into the GPU cooler".

In addition to the buffed up cooler, Asus has added "top-shelf capacitors, chokes and power stages effortlessly deliver hundreds of watts at a millisecond’s notice." This Super Alloy Power II design is the fruit of Auto-Extreme manufacturing.

Asus claims its TUF designs have been reworked from scratch for "more robust power and cooling". Again these seem to consist of all triple fan designs (2.7 slot) and Asus says they feature an all-metal shroud plus three powerful axial-tech fans that utilise durable dual ball fan bearings. Independent heatsinks for the GPU and memory have been put in place. 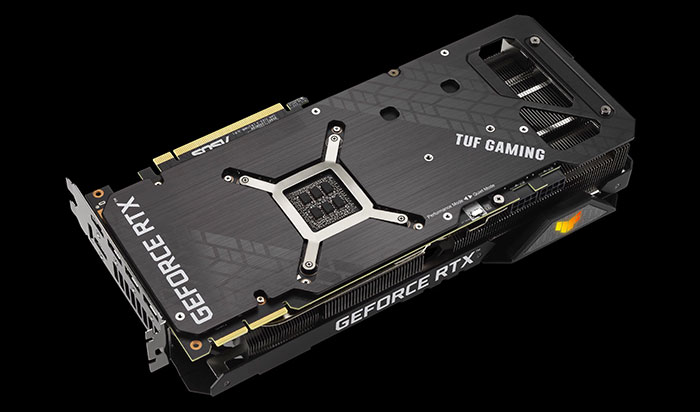 Again Asus claims to have used top-shelf chokes, MOSFETs, and capacitors - based upon durability and performance - all precisely soldered in place via Auto-Extreme. Round the back you will find the same metal backplate and PCB venting used by the Strix series - for the same stated reason of airflow exhaust. 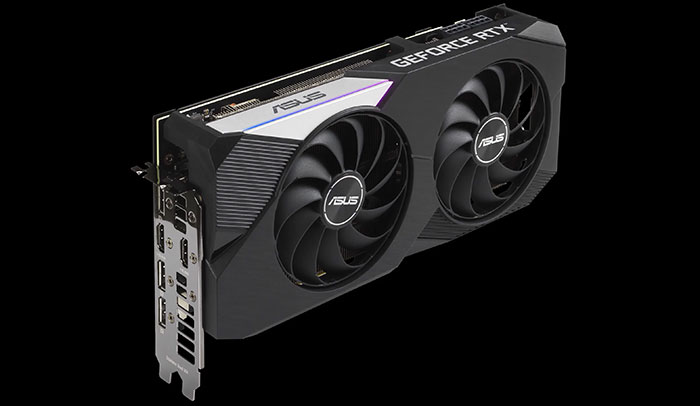 The Asus Dual cards with Ampere GPUs live up to their billing and feature a simple twin Axial fan shroud. At this time this 2.7-slot range is limited to the RTX 3070 GPU. This no-frills design with 0dB mode features an aluminium backplate and stainless steel IO bracket for durability.

Above you will notice that Asus hasn't provided any GPU base/boost clock speeds to claim any superiority over Nvidia reference designs. Moreover, the firm doesn't seem to have published product pages as yet, which usually offer up such details - only a ROG blog post.

We do get a hint of things to come in our PR email though. Asus UK PR says that its new cards aren't just an aesthetic proposition but will offer "excellent robust performance over reference cards". Thus we will expect better than reference base/boost clocks depending on models/cooling solutions. More details will be coming nearer to product launch dates which are; 17th Sept for the GeForce RTX 3080, 24th Sept for the RTX 3090, and 'October' for the RTX 3070.

pigdoguk02
They lack style compared to the cards from NVIDIA.

Presumably they are cheaper hence the cooling, it be in a case so don’t care about the looks..