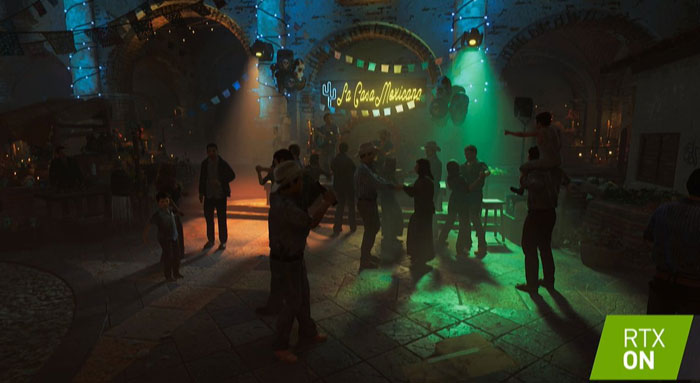 You can find the game patch and release notes available on Steam, and the update should auto-apply if you open up the Steam client then fire up the game. Before you run the updated game you might want to check you have the latest version of the GeForce graphics driver, for optimal performance.

In summary you will need the following to get Shadow of the Tomb Raider running, with RTX shadows and DLSS  applied:

With the above conditions satisfied, in game you will be able to set the raytraced shadow quality from medium to high to ultra, and adjust DLSS settings, among many other graphics quality options. TechPowerUp has already tested the full range of GeForce RTX graphics cards in Shadow of the Tomb Raider and usefully compares image quality and performance over several pages in a special feature it has published. Interestingly, TPU concludes that the raytraced shadows feel simply like an additional high-end quality setting rather than a game-transforming addition. The frame rate performance hit for turning on raytraced shadows is somewhere between a 30 and 50 per cent reduction. 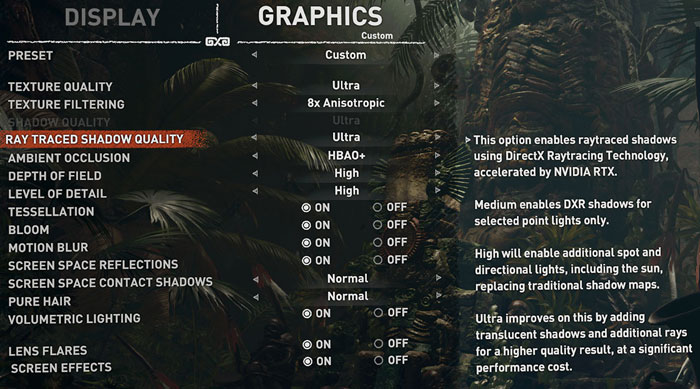 Remember, next month, after Nvidia releases a new graphics driver, those with GeForce GTX 1060 graphics cards and better will also be able to test out the raytracing facilities in this game. However, without the specialised RT cores, turning 'RTX On' on your GTX card might not be advisable for optimal gameplay.

Posted by Tabbykatze - Wed 20 Mar 2019 12:39
50 percent even with dedicated hardware, jesus christ!
Posted by 3dcandy - Wed 20 Mar 2019 13:34
My thoughts as well….
Quarter of the core and you still get 50%
Posted by Vandella1985 - Wed 20 Mar 2019 13:43
definitely still needs some optimization.. although it does look good.. can get 50-80fps in 4k rtx ultra with dlss on…
have a question about the ray tracing and the other options though.. should we still need ambient occlusion, and screen space options and volumetric lighting on?
Posted by Hoonigan - Wed 20 Mar 2019 15:58
Been waiting a while for this update, I'm really hoping it'll look as good as the demo videos showed it to.

Posted by Spud1 - Wed 20 Mar 2019 22:10
Glad this update is finally out - i've been waiting for this before finishing the game..and glad I did :) It looks beautiful with it on and the difference is very noticeable..I get around 60-70fps with my 2080 (with RTX on “high” and everything else Ultra) - the FPS does dip below 60 occasionally but its not noticeble thanks the G-Sync :)

Definitely needs optimisiation mind - but then we've seen that with the other initial RTX launches too, and I expect we will see another update in the coming weeks which will improve the FPS further. Still, 60FPS is the target and it hits that very well for me. Worth the wait!