There has been a bit of a controversy about EA's handling of microtransactions, loot crates, and overall fairness to gamers in the past week. Star Wars Battlefront II has been available ahead of general release to various subscribers / premium purchasers and sections of the internet have been throbbing with displeasure. The price vs grind ratio to unlock heroes was probably the main bone of contention and one that garnered world record beating down-votes on reddit at the start of the week. However, someone at EA made a big decision a few hours ago and decided, as the game launches worldwide today, to "turn off all in-game purchases". Before we go any further, in-game purchases will be back at a later date but will aim not to overshadow the game. 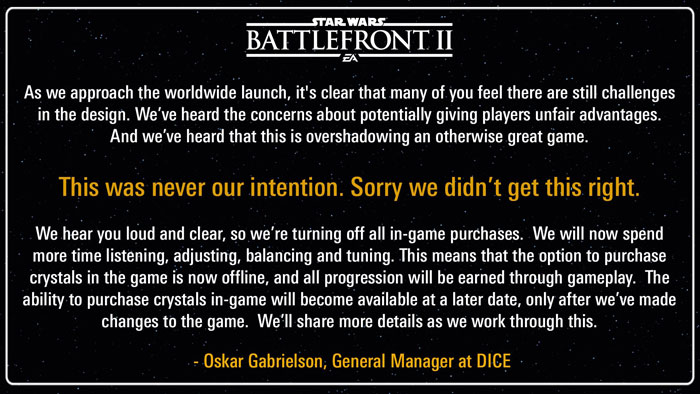 In another update on the EA blog, Oskar Gabrielson, General Manager at DICE shared the news. As the hours ticked away towards the worldwide launch of the new game Gabrielson didn't want challenges in the design, potentially giving big-wallet gamers unfair advantages, to "overshadow an otherwise great game". He apologised in large, bold, gold lettering: "This was never our intention. Sorry we didn’t get this right."

If you are interested in the exact wording of the blog post it is available here. The blog offers a little bit more detail than the graphics shared above by EA Star Wars via Twitter.

Meanwhile EA / DICE hope to work on the game post-release. Hopefully that means that the excessive amount of hours you have to clock up to earn heroes etc (AKA grind) will be adjusted downwards). It is noted that even after the previous mea culpa changes implemented by EA / DICE earlier this week, a player would have to spend approx 4,500 hours to unlock every base-game piece of content in Star Wars Battlefront II (or about $2,100). 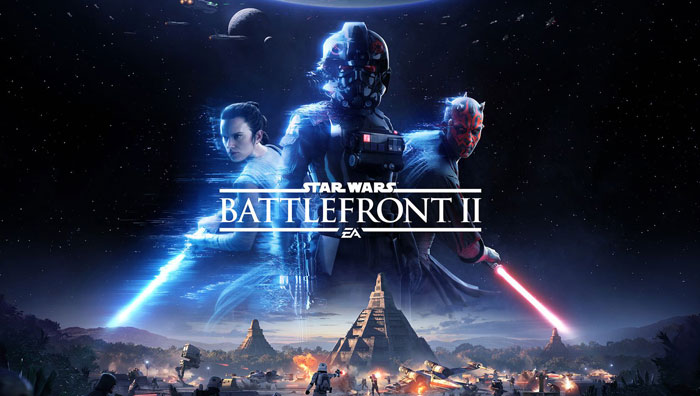 It wasn't just the gaming community that piled pressure on EA with regard to its in-game purchases. At the same time some influence seems to have come from both Belgian and Dutch gambling authorities over the Loot Crate mechanisms employed by titles including Star Wars Battlefront II and Overwatch. Are Loot Crates that can be earned or paid for gambling? - that is the question.

Posted by 3s-gtech - Fri 17 Nov 2017 09:36
Credit to the gaming community for speaking out and not taking it lying down, and credit to EA/DICE for listening (at their peril not to). Hopefully other developers will take note.
Posted by spacein_vader - Fri 17 Nov 2017 10:05

3s-gtech
Credit to the gaming community for speaking out and not taking it lying down, and credit to EA/DICE for listening (at their peril not to). Hopefully other developers will take note.

I'll hold judgement on giving DICE/EA credit until I see what their solution is. It might just be to buy time till it blows over, make tiny tweaks and reapply once everyone's bought the game and the press have moved on. I'm more interested in how various governments decide to view the loot crate idea (and it's far from just EA that are doing it,) and whether they bring it under gambling legislation.
Posted by Corky34 - Fri 17 Nov 2017 10:23
To little to late if you ask me, EA have made their intentions clear and no amount of backpedaling or apologises are going to convince me that their not going to return to a pay to win model, first it was Dungeon Keeper then it was Star Wars Battlefront II.

EA will IMO keep pushing the pay to win model of gaming until customers begrudging roll over.
Posted by ksdp37 - Fri 17 Nov 2017 10:29
The ability to purchase will be available later on?

This is just a smoke screen, a publicity stunt. Where money is concerned, EA will find a way to make you pay, they'll never change.
Posted by cheesemp - Fri 17 Nov 2017 10:34

ksdp37
The ability to purchase will be available later on?

This is just a smoke screen, a publicity stunt. Where money is concerned, EA will find a way to make you pay, they'll never change.

This 100%… I imagine they'll wait for Christmas and add it back in to get people who got it for Christmas to spend to catch up with those who got it at launch. I'm sticking with my EA boycott I've had for years (helped even more by not having the games available outside of Origin).