Samsung has announced the development of the industry's first 512GB DDR5-7200 memory modules. The announcement took place at Hot Chips 33, and Hardware Luxx has shared some illuminating slides and commentary of the event. Just like our previous story today, also based on a Hot Chips 33 presentation, this announcement from Samsung is reliant on TSV (Through-Silicon Via) technology. 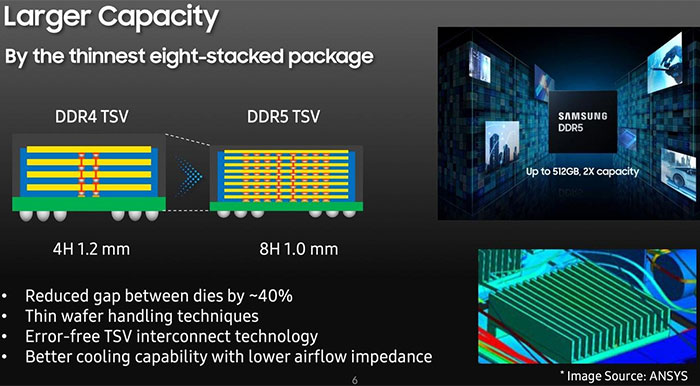 Samsung's new 512GB DDR5 modules refine the firm's layer stacking memory packing tech, as used in its latest DDR4 memory modules. Above, you can see a diagram comparing Samsung's 4-layer DDR4 memory chips, with 8-layer DDR5 chips, both connected using TSVs. Through grinding of the silicon layers Samsung has been able to make the constituent dies 40 per cent thinner, and similarly reduced layer spacing - thus these much denser DDR5 ICs are actually thinner, at 1.0mm vs 1.2mm. 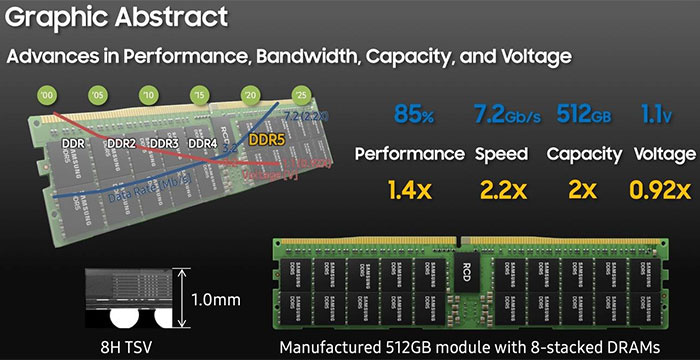 Importantly, Samsung claims it has its DDR5 modules are running cool, thanks to qualities like "lower airflow impedance," as well as the lower voltages and greater efficiency inherent with DDR5 memory made on Samsung's HKMG process. 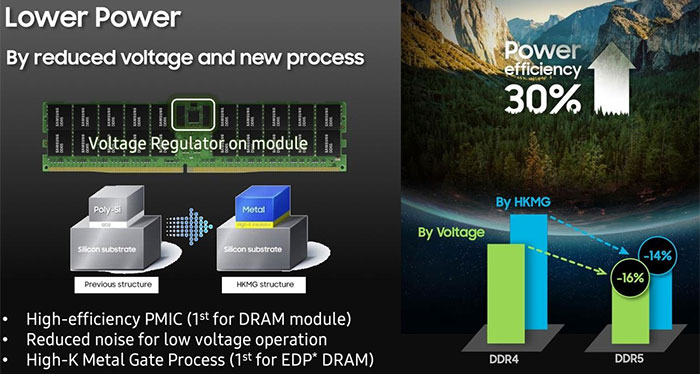 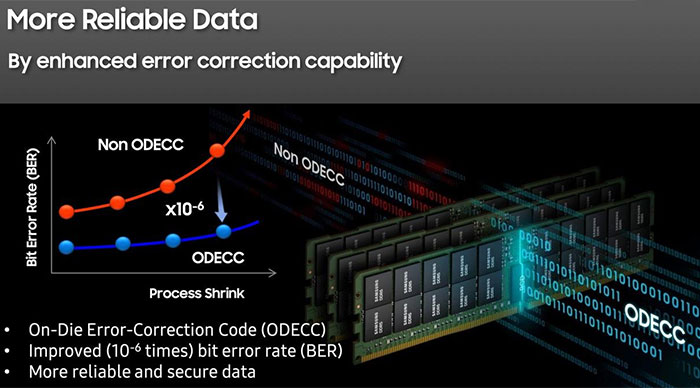 Samsung is aiming to mass produce the first DDR5-7200 modules before the year is out. Initially it will be targeting servers, which have generally been constrained in RAM quotas with DDR4 modules only commonly available in capacities up to 64GB (128GB modules being rare). Previously a server with 8 DIMM slots might max out at 0.5TB of RAM, but with Samsung's new DDR5 modules in place it could boast 4TB of RAM. Mainstream DDR5 modules for PC enthusiasts aren't expected to come in capacities greater than 64GB to start with.

God, the red writing on that image over the memory module is horrible to read! (It says “1.1v 0.92x Voltage V”, basically the right side of the images text)

Yay for even worse memory usage optimisation!
Posted by kompukare - Mon 23 Aug 2021 15:25
No price given but the "Manufactured 512GB module with 8-stacked DRAMs" screams you don't want to know.