G.Skill has announced that it has prepared a new high-performance, high-capacity, low-latency DDR4 memory kit targeting users of the latest AMD Ryzen Threadripper 3990X processor (please check out the HEXUS review of the 64C/128T TR 3990X from last week). The new Trident Z Neo DDR4-3600 CL16-20-20 256GB (32GBx8) 1.35V memory kits have been tested and validated and are designed for "those pursuing ultimate memory performance or attempting to build a powerful workstation for heavy content creation workloads," says G.Skill. 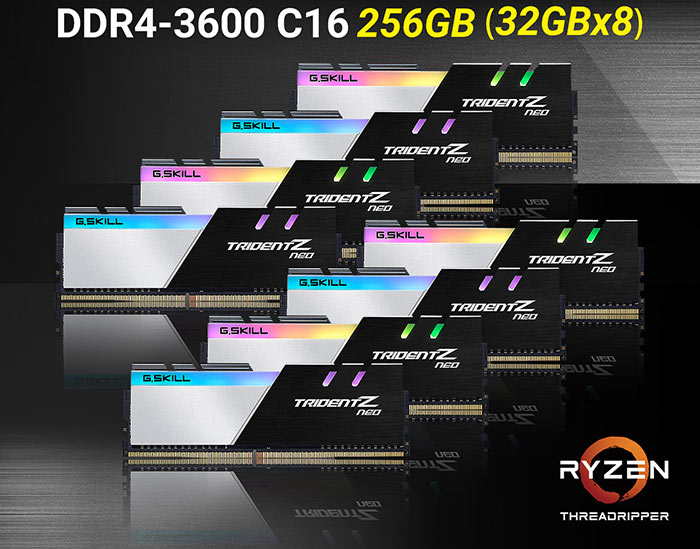 The G.Skill Trident Z Neo DDR4-3600 256GB kit consist of eight memory modules which will full populate motherboards like the Asus ROG Zenith II Extreme Alpha, which is the platform G.Skill uses to validate these kits.

G.Skill says it uses the latest high-density 16Gb components to construct its 32GB DIMMs and it considers this choice to be the best available to push the balance of capacity, performance and latency to what it has here.

If you are going to push the boast out to purchase a 128-thread AMD Ryzen Threadripper 3990X and motherboard, this G.Skill kit could be a good match for you if your tasks also benefit from lashings of fast RAM. 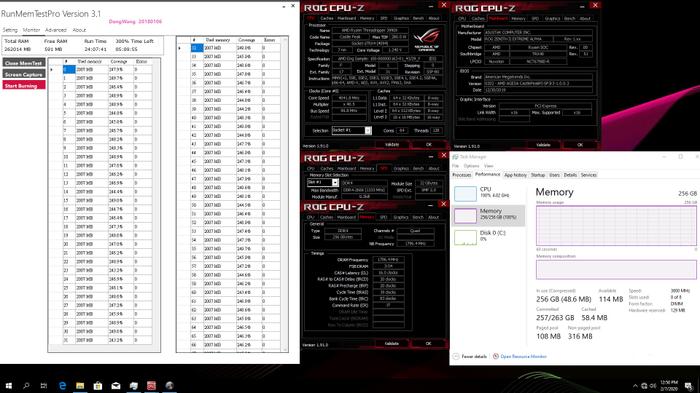 If you buy this memory kit you aren't just getting stacks of RAM, the Trident Z Neo DIMMs come with pleasingly punchy but diffused and smooth RGB LED lighting effects. With 8x DIMMs in this kit with 8x zones each, this will provide a considerable amount of illumination. HEXUS reviewed a dual-channel G.Skill Trident Z Neo memory kit back in August last year.

DanceswithUnix
I see no mention of ECC ram, one of the basic needs for a workstation???

It isn't necessary for every type of workstation, I'd see no real gain by using ecc for my 3D work for example.
Posted by DanceswithUnix - Tue 11 Feb 2020 16:12

LSG501
It isn't necessary for every type of workstation, I'd see no real gain by using ecc for my 3D work for example.

But if you care about the correctness of your work, then you should be using ECC ram.

It would seem odd to invest all that money in a machine to do that video render really fast, then risk haviing to do it again because there was a glitch in the middle.

I think modern ram is actually better than the old DDR and DDR2 ram and I see surprisingly few errors, but having worked on corporate server design with that sort of memory quantity I know they happen. Who the heck wants 256GB but doesn't care about the integrity? Same person that wants RGB I presume.

This PC has 16GB of standard DDR4 and it has honestly bugged the hell out of me since I built it. I don't *know* of any problems, it has had zero crashes under Linux where I care about such things, but I don't *know* for sure. As production releases are all compiled on a 2600X based server that does have ECC ram it won't ever impact customers, else I couldn't have taken the punt.

The kids even have ECC ram in their PCs, being hand-me-down workstations, so at least their homework is safe :D

Usually ECC ram is a fairly small uptick in cost vs non ECC, but sadly when I built this there seemed to be a real scarcity and I couldn't justify the cost. At some point I will get some proper grown up ram, and this junk can go in a games machine.


Edit: I notice the Threadripper max supported memory speed is 3200, so these sticks are an overclock. I don't think the official specs for ECC ram go above a 2666 rating, so the best you can get for a proper workstation is something like this:

which at £167 per stick is going to cost you a bargain £1336 to fill your slots. OFC you could try and overclock your ECC ram, and unlike the cheap stuff you can look in your /var/log/messages file to see if the kernel is reporting memory errors so you actually know if the overclock is working. It surprises me that overclockers don't buy ECC.