AMD came roaring back into the high-end desktop (HEDT) space with the release of Ryzen Threadripper chips in August 2017, followed a year later by 2nd Generation models housing up to 32 cores and 64 threads. 3rd Gen chips bring with them a revised chiplet design whose CPU cores are manufactured by TSMC on a 7nm process.

The increasing minituarisation of transistors enables AMD to shoehorn more cores into each generation, culminating in today's review of the Ryzen Threadripper 3990X - a 64-core, 128-thread monster designed for workstation users whose software is effectively able to span across never-seen-before CPU muscle in the HEDT arena.

It's worth hitting up the 3rd Gen Ryzen Threadripper review to see how AMD goes about building this monster CPU. For those inclined for a simpler version, 3990X uses a total of nine dies - eight 7nm CPU (known as CCDs), one centralised 12nm I/O - much in the vein of the server-optimised Epyc 7742P. There are some 3.9bn transistors for each of the eight CCDs and 8.34bn for the I/O, leading to almost 40bn mixed-process transistors in one chip!

Yet both are clearly not cut from exactly the same cloth. The workstation solution matches its Epyc cousin on core-and-thread count, L2 and L3 cache - the basic building blocks underpinning Zen 2 construction - but has half the number of total PCIe Gen 4.0 lanes (64 vs. 128) and, crucially for some workloads, half the amount of external memory bandwidth (quad-channel vs. octo-channel), and a relatively paltry one-sixteenth of the total supported amount (256GB vs. 4TB). It's also worth knowing that official memory speed is dependant upon the DDR4 configuration, with four modules offering the fastest 3,200MHz while shoehorning a maximum 256GB, comprised of eight sticks, reduces this to 2,667MHz.

One cannot run any Ryzen Threadripper in a dual-processor configuration, either, and while both Epyc and Threadripper use a 4,094-pin socket, they do not work in each other's boards. These are manifest differences for those that care, so it is prudent not to conflate the two high-core CPUs.

All that said, this is certainly no shrinking violet. AMD evidently reserves the very best silicon for the 3990X, as it has to drive double the number of threads at the same lofty 280W TDP as other new 'rippers. The knock-on effect is lower frequencies, with AMD quoting 2.9GHz base and 4.3GHz boost. For most proper power users the all-core speed is the most important metric, and that depends upon cooling and actual silicon quality. Nevertheless, our 3970X sample runs at an all-core speed of 3.875GHz using liquid cooling; the 3990X sample, using exactly the same setup, chugs along at 3.075GHz. 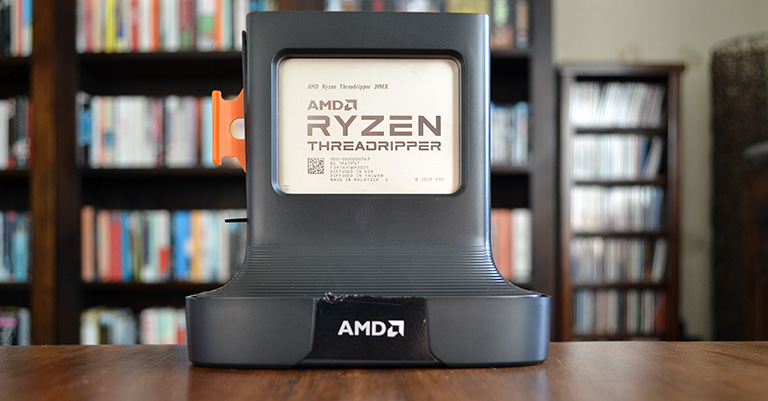 The practical upshot is significant, because 3990X won't be twice as fast as 3970X in CPU-bound scenarios. A best-case scenario is about a 60-70 percent uplift over the already-fast chip.

Marketed to workstation or digital content creators whose workloads take multiple hours or days to complete, and those which properly span to 128 threads, the $3,990 (£3,750) price, matching the model number, is a relative non-issue for industries where time is very much money.

As usual, AMD supplies the 3rd Gen Ryzen Threadripper CPUs, including the range-topper 3990X, without heatsinks in the package. Makes sense as you'd want to invest in some high-quality cooling, particularly when overclocking, as you will see later on.

AMD already holds the performance crown for the fastest HEDT chip out there. For multi-threaded applications that crown slips on comfortably to the 3990X. The question is, we suppose, just how fast is it? Let's find out.