G.Skill has adopted AMD's 3rd Generation Ryzen processors with gusto. There's good reason for that, too, because the latest iteration of chips offers an improved memory controller which scales higher than previous generations. Want to use DDR4-3600-plus memory? Ryzen 3rd Gen allows you to do that.

Rather than rehash an existing range, G.Skill has launched a new series dubbed Trident Z Neo. As is usual, there is a lot of choice with respect to memory speed, timings, voltages and capacities, and the following graphic summarises them neatly. 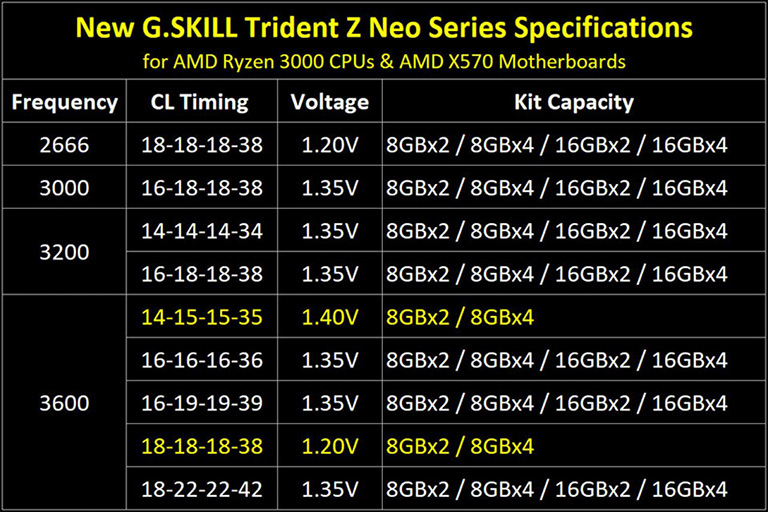 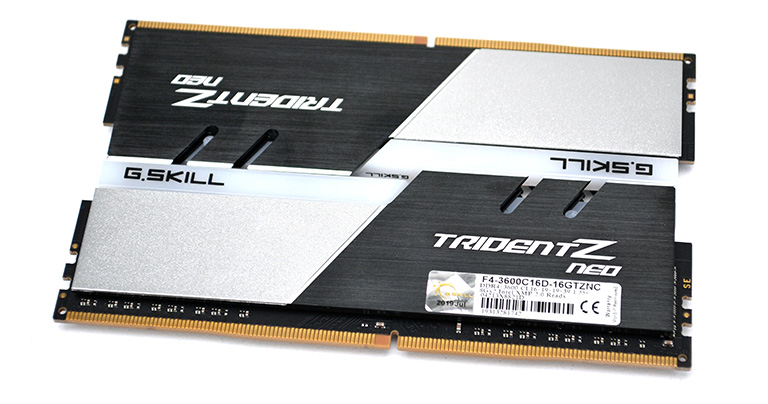 Interestingly, G.Skill drops the AMD-only AMP settings and runs with Intel XMP instead. It makes no meaningful difference, of course, because the motherboard picks them up just fine. One-click automation of timings and speeds means it's easy to get them running at the right speeds.

The modules follow the general Trident Z design language of having an elongated s-shaped bar running along the top of the modules and fins on either side. Compared to a non-RGB-enabled set, Neo decreases the fins from three to two, facilitating a wider light-bar, employs bevelled top edges that still remain sharp, and replaces the straight partition in the heatspreader with a diagonal one.

To our eye, the Neo modules look a bit sleeker and more minimalist than other Trident Z sticks, though do be aware that, at a maximum 41mm tall, height may be an issue in space-constrained chassis using low-profile coolers. 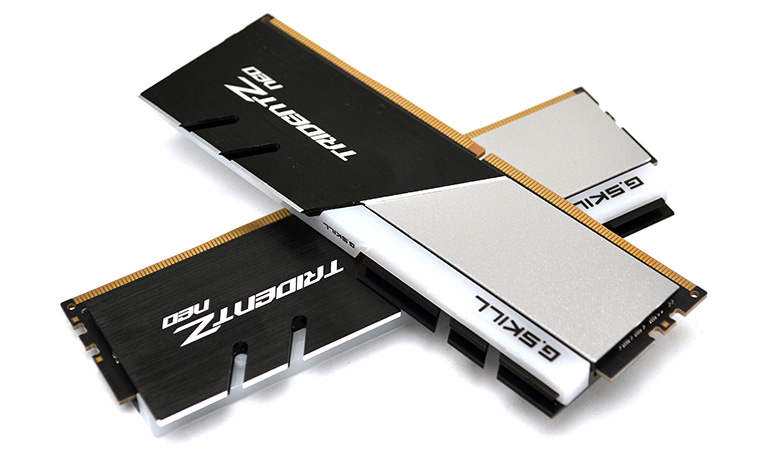 G.Skill also adopts a two-tone finish, with brushed aluminium on one side and a powder-coated silver finish on the other. It's an acquired aesthetic, and it looks better when RGB illumination is active. The matte finish on the silver side is handy as it minimises light bounce on to the motherboard.

Speaking of which, Trident Z Neo has an 8-zone RGB system underneath the light-bar, which is shared with the also-new Trident Z Royal modules. It's no surprise to learn that both use the same Lighting Control utility. Trident Z Neo is also supported by third-party RGB software from motherboard vendors, such as Asus Aura Sync, Gigabyte RGB Fusion, MSI Mystic Light, and ASRock Polychrome, but do be aware that having both the G.Skill and motherboard maker's utility installed at the same time is likely to cause conflict as each program wrestles for lighting control.

In the end, we had to uninstall Asus Aura Sync from our Crosshair VIII Hero WiFi in order to maintain consistent, seamless control. Why use G.Skill instead of Asus? The firm's own utility gives clearer control over each lighting zone.

Lighting quality is punchy and smooth across the light-bar. Note the solid reflections coming from the Noctua heatsink and GeForce RTX 2080 Ti Founders Edition graphics card? We prefer the diffuse look from the Neo to the sparklier effect emanating from the Royal modules, and G.Skill's RGB implementation is right up there with the competition.

With memory prices becoming more palatable in recent months - you can get a non-RGB kit of 16GB DDR4-3600 memory for <£100 - you are looking at a minimum of £150 for this particular Neo set. That's a significant price premium, no matter which way you cut it, yet it's in the same ballpark as, say, Corsair's RGB Pro Black and Dominator Platinum RGB sticks.