About a week ago, HEXUS reported on Samsung's tease of the upcoming Odyssey Neo G9 gaming monitor. Now it has officially taken the wraps off this 49-inch monitor, featuring a 1000R curved Quantum Mini LED panel, boasting Quantum HDR 2000 VDE certification, and which it claims represents "the future of gaming". So, at last, we can have a look at the officially confirmed specs of this all-in PC gaming monitor. We have pricing and availability info too. 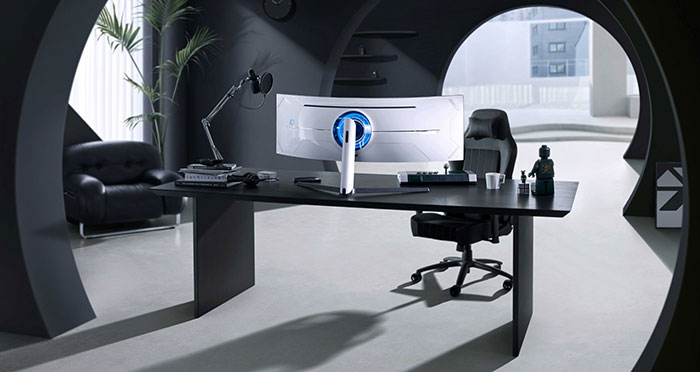 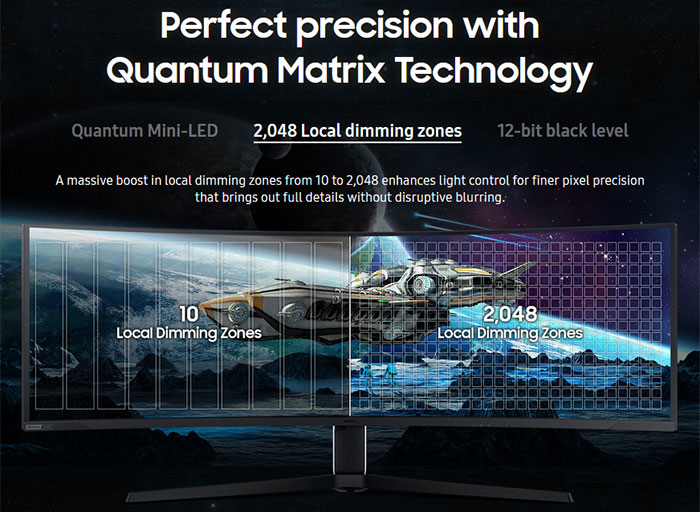 One can see here how retailers like Taobao got mixed up with the specs, describing this as a VESA Display HDR 2000 display in a pre-order retail page. At the time of writing, VESA still asserts there is no such certification level. This Samsung monitor is certified as being HDR 2000 capable by VDE (Verband Deutscher Elektrotechniker).

Looking at some further screen specs, we can see that just like its 49-inch Odyssey G9 predecessor, the Samsung Odyssey Neo G9 features a 32:9 aspect ratio that offers Dual Quad High-Definition (DQHD: 5,120×1,440 resolution) with a rapid, 240Hz refresh rate and 1ms response time. Users can make the most of the wide refresh rate on offer via Adaptive Sync on DP1.4 and HDMI2.1 VRR (Variable Refresh Rate) through HDMI 2.1 with Nvidia G-Sync Compatibility and AMD FreeSync Premium Pro. 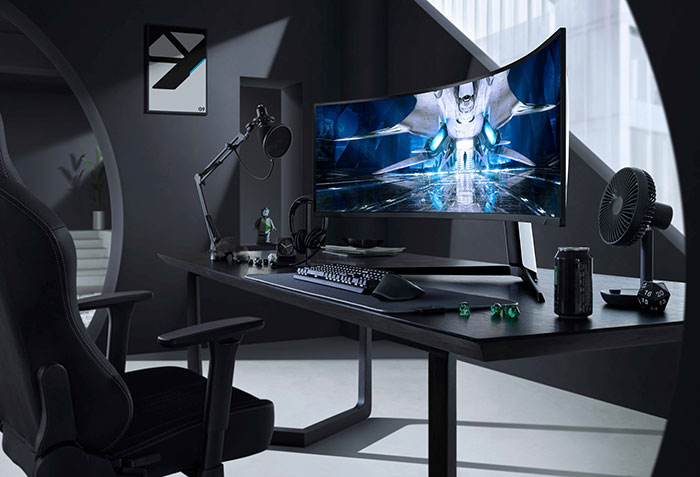 As you would expect, Samsung has implemented its gaming tech here such as Black Equalizer, Low Input Lag Mode, Refresh Rate Optimizer, and the Super Arena Gaming UX. Other features here are a 2-port USB hub, a headphone socket, 52 colours and five lighting effect options, and a tilt/swivel adjustable stand (or use a 100x100 VESA mount).

Pre-orders of the Samsung Odyssey Neo G9 'G95NA' start on 29th July, with global availability from 9th August. Expect to pay your local equivalent of US$2,500.

Ttaskmaster
From the title, I was expecting a cute little mini gaming monitor!

Me too, was about to ask how a 49" monitor is classed as mini.. those pesky mini leds.
Posted by Spud1 - Tue 27 Jul 2021 14:20
It's worth noting that Samsung don't typically use the “VESA HDR XXXX” standards/certifications etc in their marketing (its rare if you read the wording carefully…) - they (deliberately I am sure!) use similar but different branding, relating to the peak brightness of their panels. So “Quantum HDR 2000” just means “peak brightness of 2000 nits”.

That is technically rather different to VESA's certification which relates to much more than just peak brightness.

Yes it's misleading, but this has been the case for several product generations now. I expect this also explains the original mistake by Taobao, as its a very easy thing to get lost in translation given how similar the branding is.

Back to the screen itself - I still just wish they would make a sensibly sized version. A regular ultrawide would be perfect, super is just too wide.
Posted by kalniel - Tue 27 Jul 2021 14:51

Spud1
Yes it's misleading, but this has been the case for several product generations now. I expect this also explains the original mistake by Taobao, as its a very easy thing to get lost in translation given how similar the branding is.

It's not just Taobao (who aside from just looking at branding, also included the Vesa Certified trademark and tick icon). Hexus also claimed it was VESA HDR 2000 in their text too.