In the not too distant future tech enthusiasts might be keenly discussing the merits of devices with 'metaphotonic OLED displays'. This is a new kind of OLED display which branched from research into ultra-thin solar panels. Key attractions of the new metaphotonic OLED displays are their very high pixel densities (up to 10,000ppi), as well as being brighter and offering "better colour accuracy," than existing OLED tech.

To create ultra thin and efficient solar panels Stanford University materials scientist Mark Brongersma decided to try and take advantage of the fact that, "on the nanoscale, light can flow around objects like water". The theory has worked really well in solar panel design and thanks to some lateral thinking by Won-Jae Joo, a Stanford visiting scientist from the Samsung Advanced Institute of Technology (SAIT), it looks like the nanoscale tech will impact the OLED display market.

"The crucial innovation behind both the solar panel and the new OLED is a base layer of reflective metal with nanoscale corrugations, called an optical metasurface," explains the Stanford News blog. "The metasurface can manipulate the reflective properties of light and thereby allow the different colours to resonate in the pixels. These resonances are key to facilitating effective light extraction from the OLEDs."

Having all the pixels of the same height makes the manufacturing process simpler and aids large-scale as well as micro-scale fabrication. In tests of early lab made metaphotonic OLED displays, Brongersma and SAIT researchers have created pixels with a higher colour purity and a twofold increase in luminescence efficiency compared to TV OLED tech (colour-filtered white-OLEDs). 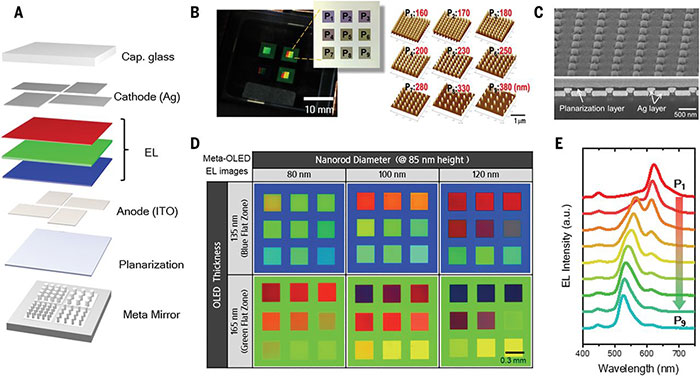 Samsung is currently busying itself creating a full-sized display using this new nanoscale tech. The metaphotonic OLED displays are expected to become particularly appealing in devices such as HMDs where the display is situated very close to the eye and high ppi figures are particularly welcome.

In the not too distant future tech enthusiasts might be keenly discussing the merits of devices with ‘metaphotonic OLED displays’.

Tech enthusiasts might, but I wonder how much anybody else will care?

I mean, sure, it's great when technology gets better and better all the time, but where the appreciation of it is subjective, it will reach the point where further ‘improvements’ are of minimal or zero benefit to that subjective appreciation.

It happened, for instance, with colour printers, even photo printers. When the technology is so good that most people can't tell the difference without studying a picture up close, or with a magnifying glass, does the difference matter?

If we go SD, pseudo-HD, HD, 4k (and a few other wrinkles along the way) sooner or later we reach the point where even if there's a marginal benefit, it won't be enough for most people to ‘upgrade’ just to get it. When the old TV (or whaatever) packs up, they'll upgrade providing doing so doesn't cost a fortune, but otherwise, will stick with status quo.

I know I (and the wife) aren't typical but, SD TV is fine for our usage. We have an HD set, but only because that was standard when we last changed. I wouldn't have paid extra to do it. We're currently looking again, and may end up with 4k (if it doesn't cost more) but it isn't on my desired feature list, at all.

I'm sure I'm an exception in not caring about SD or HD, let alone ‘better’ but sooner or later, the norm will be good enough that most people won't pay out to get notionally ‘better’. And I think we're rapidly approaching that point on displays, if we aren't already pretty much there.
Posted by Gentle Viking - Mon 26 Oct 2020 11:51
Never underestimate bragging rights of people with money or a will to spend money even if it is the banks money.
Posted by rabidmunkee - Mon 26 Oct 2020 12:34
hah, just wait for the iApple people to get hold of this, we wont hear the end of it.
Posted by liquidflower - Mon 26 Oct 2020 13:01
Sometimes industry throws away a better technology to use a cheaper but worse one

Also there's someone on a consumer forum saying his oled tv has burn in, and he's thinking about suing in the small claims court

https://conversation.which.co.uk/community/welcome-lounge-introduce-yourself/#comment-1610176
Posted by edmundhonda - Mon 26 Oct 2020 14:48
At normal viewing distances, a 4k TV needs to be exceptionally large for the added detail to be noticable with human eyesight; on a phone anything beyond the current ~4-500 ppi is invisible. Struggling to think of a use for a display like this. Projection, maybe? VR/AR?

liquidflower
Also there's someone on a consumer forum saying his oled tv has burn in, and he's thinking about suing in the small claims court

tldr: OLEDs burn in if you treat them poorly, otherwise they're great.