Over the weekend there seems to have been a splurge of leaks of Intel Z490 chipset motherboards. These are the motherboards being readied to support Intel Comet Lake-S desktop processors which fit in the new LGA 1200 socket. Various leaks and spills have disclosed new Z490 product ranges, and some pricing, from the big three; Asus, Gigabyte, and MSI.

Just ahead of the weekend Momomo_us on Twitter shared a link to the official Asus product page for the current-gen Z390 Prime motherboard series which accidentally hosted imagery for the new Z490 Prime series. VideoCardz saved some of the images for posterity. On Saturday we saw a similar accident with the Asus TUF Z490-Plus revealed on the TUF B365 product page. You can see the main image for the TUF Z490-Plus below, clearly marked as a Z490 board. 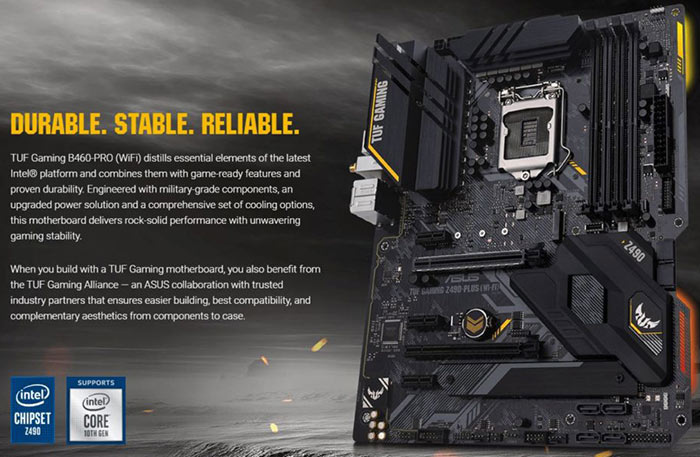 Gigabyte had fifteen Z490 motherboard models listed at a Ukrainian tech retailer this weekend (via Tom's Hardware). This compares to 17 Z390 models it release but we can't be sure there aren't more models on the way or simply not in this particular retailer's warehouse. The range seen pretty much mirrored the current range in naming; simply swap the 'Z390' for 'Z490' to get the lineup. Gigabyte Z490 products span a wide range of sizes from mini-ITX to E-ATX, and feature sets.

Perhaps more interesting was the pricing revealed by the retailer. Compared to Z390 motherboards on the same site the new Z490 -based products were between 27 and 53 per cent more expensive. At the top end of the product stack is the Gigabyte Z490 Aorus Xtreme WaterForce being sold for the equivalent of US$1,072. Meanwhile the cheapest new board, the Gigabyte Z490M s listed at approx $170, 27 per cent more expensive than the Z390 version.

HEXUS reported upon the first signs of the upcoming Z490 boards from Gigabyte / Aorus in September last year.

Images and pricing for MSI's new Intel Z490 motherboards have been shared by Komachi and Momomo_us, respectively (via VideoCardz). Again, MSI's lineup looks pretty consistent with what it released with the Z390 chipset. Below you can see some images from the new lineup. 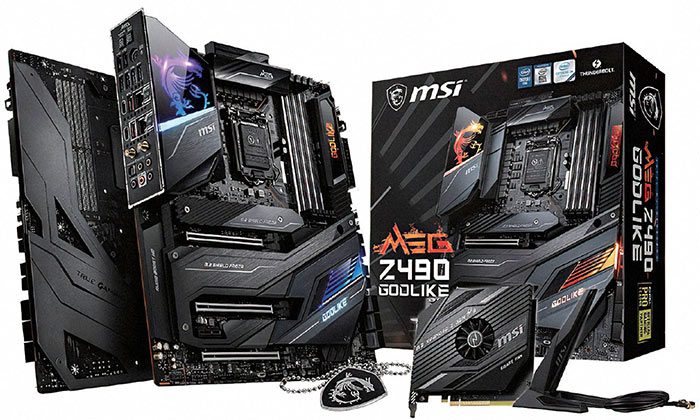 Again the prices (in Euros in this leak) look somewhat steep, especially considering these boards might only be supported by the Comet Lake-S and Rocket Lake-S CPU series. Remember that these sources, especially concerning the pricing, might not match what materialises at launch, and take these reports with a pinch of salt.

Posted by philehidiot - Mon 20 Apr 2020 12:32
I didn't resent paying so much for an AMD mobo given it had PCI-e 4 and was fairly certain to be good for a CPU upgrade in the future. It was a product built to last.

Intel plans obsolescence into their product ranges. These motherboards are disposable items in many ways - you are not going to keep one for longer than the CPU.

They couldn't get away with soldering the CPU directly onto the motherboard, so they just made it so you had to throw away the mobo to upgrade anyway.

They may well be of identical quality in terms of components, build, etc. But they are not designed as PCs were meant to be designed - to be the core of the system into which modular components can be placed and chopped and changed whilst the mobo stays the same except when major, step advances in technology prohibit it.
Posted by 3dcandy - Mon 20 Apr 2020 12:55
27% and up more expensive despite the fact that they aren't really much different from previous generations…

And $170 - and they wonder why AMD are making massive inroads into the desktop space
Posted by CAT-THE-FIFTH - Mon 20 Apr 2020 13:03
Watch as power consumption won't suddenly matter as much,if Intel wins 10% in games.

:P
Posted by DDY - Mon 20 Apr 2020 13:22
Give it a few weeks, we'll have LGA1200 motherboards made with thrice recycled H110 chips from the Far East, there will be about two dozen brands of the same boards on Aliexpress - for a few weeks. After that, they'd be gone forever, but immortalised in the various “The board Intel didn't want you to know about” videos on Youtube.
Posted by 3dcandy - Mon 20 Apr 2020 15:23

DDY
Give it a few weeks, we'll have LGA1200 motherboards made with thrice recycled H110 chips from the Far East, there will be about two dozen brands of the same boards on Aliexpress - for a few weeks. After that, they'd be gone forever, but immortalised in the various “The board Intel didn't want you to know about” videos on Youtube.

Said by a man who appears to have experience!