It is only a few weeks until the Intel Alder Lake desktop CPU product launch and of course there is going to be a wide selection of new products designed to support these processors released at around the same time. You might be able to continue using your existing DDR4 memory on some upcoming new motherboards, and keep using your favourite CPU cooler, for example, but the new LGA1700 socket means that you will at the very least need a new motherboard to get started with your 12th Gen Core hybrid processor. Some interesting images of an Intel Z690 chipset Mini-ITX motherboard from Asus have recently leaked and provide us with a little insight about what to expect, especially for SFF PC builders. 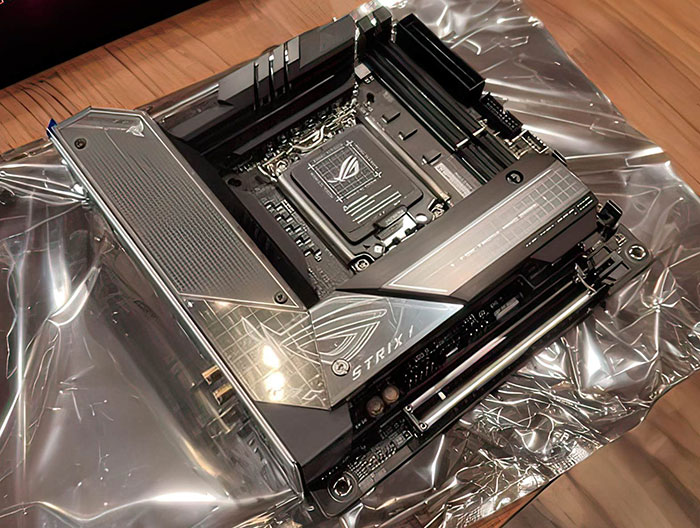 Above you can see the Asus ROG Strix Z690-I Gaming Wi-Fi motherboard, unpacked from its anti-static bag, on a desk. VideoCardz sourced the images you can see above and below from a Chinese tech chat forum. Viewed from above, the new Asus ROG Strix Z690-I Gaming Wi-Fi doesn't look a significant departure from the Asus ROG Strix Z590-I Gaming Wi-Fi with socket LGA1200, however the side-view reveals that Asus has built upwards significantly to defeat the reduced dimensions of Mini-ITX. It is thought that Asus has decided to build upwards to fit in more M.2 SSD slots (three in total, perhaps four), as well as more extension ports, and an audio daughter-card.

This extra verticality in the section near to where enthusiasts and gamers are going to be plugging in their discrete GPU cards looks like it matches the height of the rear I/O panel, which is quite a change.

Beyond speculation from pixel peeping at the motherboard, we have some solid specs shared on the motherboard packaging. This Z690 motherboard sample offers DDR5 support (two slots can be clearly seen), PCIe 5.0 support, Aura RGB lighting, Wi-Fi, and is Windows 11 ready. Asus ROG Strix Mini-ITX boards are often highly featured for their stature, and it looks like the Z690 chipset version will continue this trend with aplomb. 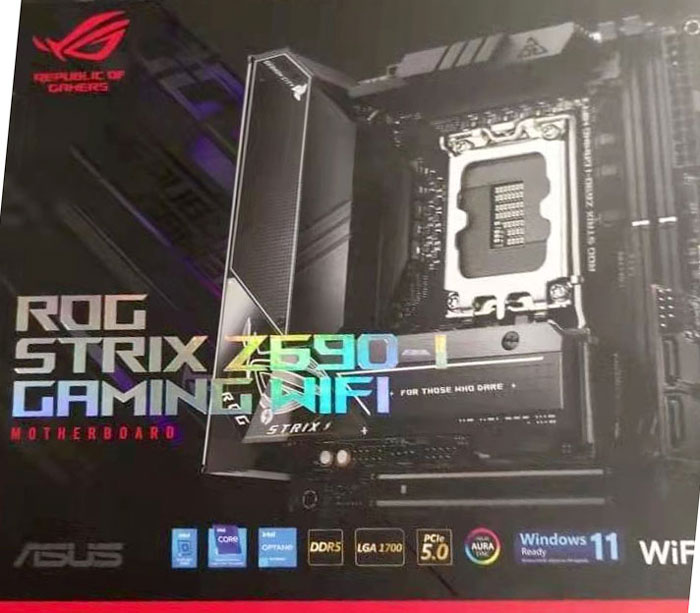 Last but not least, you can expect to see official plenty of new Z690 motherboards in early November. Retailer leaks featuring this Asus ROG Strix Z690-I Gaming Wi-Fi motherboard indicate that it will be launched at around €400.

Posted by UseItNow - Sat 16 Oct 2021 16:11
These things are getting crazily expensive and I thought the Impact's were expensive, having had a few of them over the years!

Looks good though and I do wonder if there will be an Impact on the Intel chipset, haven't seen one since Z170.