Though the Core nomenclature will follow an iterative path, make no mistake that Intel's 12th Gen Core desktop processors, codenamed Alder Lake, are a big deal. These are the first high-performance chips to be built from a hybrid architecture which combines a number of powerful hyperthreaded cores (Golden Cove) alongside fewer efficient (Gracemont) cores.

We covered this hybrid architecture in some detail during August's Architecture Day reveal, but as we get closer to full desktop launch, Intel duly provides more meat on the bones. It's most prudent to start off with disclosed models and then work our way backwards to Intel-provided performance numbers. 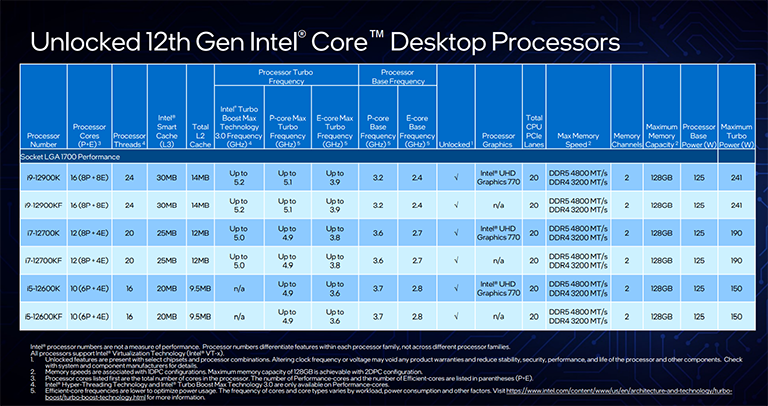 Slides provided by Intel, click to enlarge. F-suffixed chips have no integrated graphics

We now know Intel is set to release six unlocked 12th Gen Core chips from the off. Split equally into Core i9, Core i7 and Core i5 families, with two apiece, there is a lot to take in.

First understand that moving to a 12th Gen Core platform requires investment in a Z690 series motherboard - other 600 series models will follow in due course - alongside possibly a cooler upgrade for the brand-new LGA1700 socket. Furthermore, this platform is the first to offer support for DDR5 memory, though the dual-format-supporting nature of 12th Gen Core means that motherboard makers can also choose to debut boards with traditional DDR4.

It is certainly more difficult to ascertain performance from a specification sheet than ever before. The reason for this is the Performance and Efficient CPU core mix baked into each chip. At the bottom we have Core i5 chips with 6P and 4E cores, in the middle Core i7 with 8P and 4E, and at the top Core i9 with 8P and 8E. Knowing that P cores carry hyperthreading, working out the total number of threads is straightforward.

Even so, the top-bin Core i9-12900K's 24-thread complement comes up short against rival Ryzen 9 5950X's 32, but not all thread capability is created equal, which is a feature Intel is relying on to boost performance.

Keeping to their nature, it makes sense that Performance cores are not only faster on a thread-for-thread basis, they run more quickly than Efficient cores, too. That is not to say the E cores are some mere afterthoughts. Whilst their provenance is with the low-power Atom architecture, Intel reckons they are at least as fast as 10th Gen Core's for a single thread. This comparison is somewhat misleading as all 10th Gen Core chips have performance-boosting hyperthreading present: Intel is not strictly comparing apples-to-apples on the above slide.

The obvious question that needs answering is why has Intel ventured down this dual-core path? There is potential for performance mishaps as threads are apportioned to the different-capability cores, unlike on a traditional homogeneous design, and Intel has gone to the lengths of building new technology called Thread Director - the name is self-explanatory - for keeping performance up to scratch. 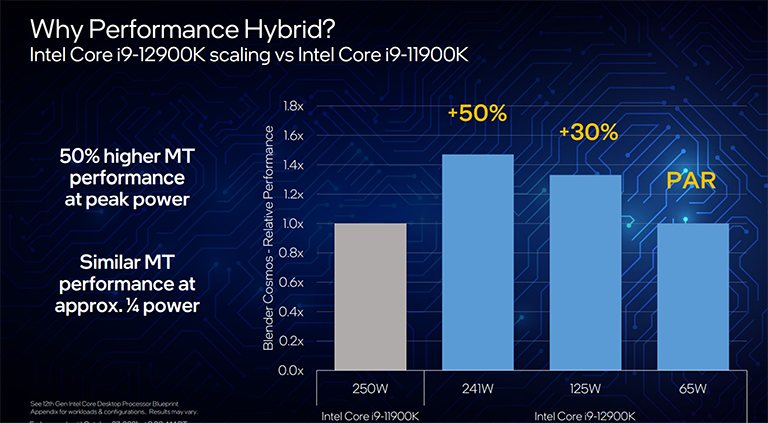 Intel says the driving factor in this decision is maximising both performance-per-watt and performance overall. Understand that four E cores fit into the same silicon footprint as a single P core whilst, combined, delivering 60 per cent more multi-threaded throughput. Think of it is way: P cores are seemingly great for single- or low-thread applications due to the enhanced Golden Cove architecture and bursty, high-frequency approach. E cores amalgamate better to help push peak performance in applications that can take advantage of lots of threads.

What Intel's therefore saying is that a one-size-fits-all approach - which has been the way for the last 30 years on desktop - is no longer the most efficient use of core resources. Backing up this assertion is an Intel-produced slide that details up to 50 per cent more MT performance than a Core i9-11900K at similar power levels, but due to the more amenable V/F curve on a hybrid design, together with a move to smaller process now known as Intel 7, Core i9-12900K is able to produce the same peak numbers with just one quarter of the power. Impressive. 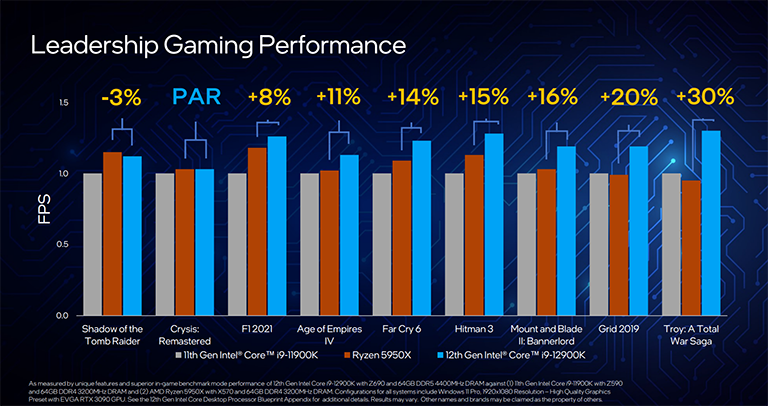 Looking to boost performance to the maximum, Intel no longer has maximum turbo states defined by time-limited PL1 and PL2 values. Instead, for enthusiasts, one can ignore the specified 125W TDP for the top-line chip. Z690 motherboards will liberally disregard this limit and invoke a 241W power budget, enabling the chip to run at higher speeds for the duration of the application. AMD doesn't do this with its Ryzen chips, however, and typically has a much lower total package power.

Run in its preferred 241W state, Intel trots out suitably impressive numbers. The company reckons Core i9-12900K is faster than either Core i9-11900K and rival Ryzen 9 5950X for gaming, and way quicker than its previous mainstream champ for content creation. Today's Intel slides make no direct mention of multi-threaded performance against the Ryzen 9 5950X; you'll have to wait a while longer for us to spill the beans.

Rival AMD has been the trailblazer with respect to adding new features to the platform. Intel is changing that with 12th Gen Core. Every chip offers 16 PCIe 5.0 lanes for either graphics or storage, though know that there are currently no devices that support the standard. Furthermore, as we spoke about above, motherboards will feature either DDR4 or DDR5 with native speeds of 3,200MHz and 4,800MHz, respectively. Expect both sets of frequencies to scale much higher once overclocking is initiated.

Z690 adds 28 expansion lanes, of which 12 are of the PCIe 4.0 variety. That feels stingy appreciating this is an all-new platform. Expect to see many Z690 boards with at least three high-speed (PCIe 4.0) NVMe slots for storage, matching what's available on AMD's X570.

Knowing there's likely to be more bandwidth traffic between chipset and CPU, Intel doubles the speed of the DMI link over Z590. Eight lanes remain, but speed increases to 16GT/s. Intel further says it has improved the overclocking capability and granular control over frequencies with this release. We'll be examining these claims in the full review.

Other than the CPU, less is currently known about the baked-in graphics. Built on Xe technology and featuring up to 32 Execution Units on the desktop, performance ought to be similar to Rocket Lake's ostensibly similar iGPU.

Intel is carefully managing expectations of 12th Gen Core desktop, codenamed Alder Lake, in the run-up to the full reveal. Using a heterogenous CPU architecture is the most radical move in over a decade. Whilst pregnant with promise of improved performance metrics, plenty of questions remain. We don't yet know how well Intel's Thread Director technology works in keeping the right core working on the right thread. Primed for Windows 11, how well does it do its apportioning job on mass-market Windows 10? Ought Intel have gone with a different mix of P and E cores? Is this design better than a homogeneous core complex taking up the same space... with either fewer P cores or more E cores? All of this is up in the air.

What we can say without hesitation is that 12th Gen Core is the most powerful mainstream CPU processor Intel has ever built. Such a statement stands to reason as the generations before it have been iterative improvements over age-old Skylake, with Intel hamstrung by dual evils of lagging process technology leading to sub-optimal design implementation.

Intel 12th Gen Core breaks free of these shackles by changing the way the CPU portion of the chip is built and works. We'll have more in-depth analysis, benchmarks, and discussion on platform enhancements in the full review soon. Until that happens, don't buy your next performance processor just yet!

18 Intel Arc Alchemist graphics cards may be pricier than expected

Posted by KultiVator - Wed 27 Oct 2021 17:20
It was only a matter of time before Intel started to get back into the game… hopeful that this increased competition spurs AMD on to the great benefit of consumers.

KultiVator
I'd imagine AMD's chiplet-based architecture could be adapted to mix performance and efficiency cores in various proportions in future CPU designs? .

It could likely be designed to mix arm, efficiency and/or performance cores, all they'd really need to change on the design is the ‘control’ part to account for the mix of cores.

I know AMD have looked at x86/arm hybrid (I'd guess intel have too) in the past so who knows where they might go now windows can support arm and x86/x64. It could actually work quite well if they could assign ‘lesser tasks’ to the arm cores etc, especially on a mobile cpu. Samsung seems to be trying to add a radeon gpu to an arm cpu too.

AMD also talked about adding in ‘AI’ type cores so I'd guess the the modular design had some future proofing in it's conception.

Assuming AMD get the same sort of ‘support’ from MS as intel did with the scheduler they could completely surprise Intel again with a ‘hybrid’ design.

At the same time, I'm not sure AMD really needs to go down the efficiency core route, they're not trying to set records for the most power draw like Intel lol
Posted by yeeeeman - Wed 27 Oct 2021 18:45

For me though it all depends on price, I'm not rich and my pocket tells me what to buy, all the new offering from leaks are out of my budget.

Intel has been beaten to a pulp only with zen 3. zen 2 was not that far off 10th gen which, lets not forget that 10th gen is just a 6700K from 2015 with 10 cores…
Not saying AMD isn't doing great, but Intel has been standing STILL, that is why AMD caught up.