In recent times, AMD has led the charge on implementing new standards across graphics cards and motherboards. The X570 chipset, released in 2019, ushered in expansive connectivity and PCIe 4.0 support. It remains the boss solution for mainstream AMD motherboards.

Slipping in ever so quietly this year is another performance chipset that's so under the radar it doesn't even feature on AMD's own AM4 catalogue. Said solution is the X570S, which differs from the regular chipset by using a more efficient process that eliminates the need for a chipset fan. Other than that, though, both variants of the X570 are identical from a specification point of view.

Handy for those that require a low-noise system, but do understand that most regular X570 boards feature BIOSes that enable the user to manually switch off the chipset fan - we've previously done so without any impact upon performance.

That said, the big boys of the motherboard world have used X570S as the perfect pretext to launch more models this summer. MSI is a good case in point as the latest four entries into the 13-strong X570 line-up are from the 'S' camp. 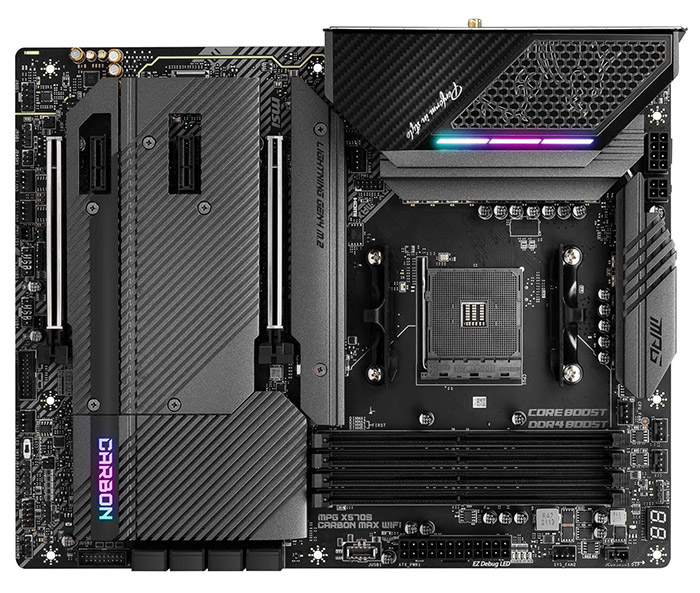 Here is the £290 MSI MPG X570S Carbon Max WiFi. No surprises in learning it has similarities to the X570 Gaming Pro Carbon WiFi, but credit where it's due, MSI has changed the aesthetic and a number of key features in this transition.

Chief amongst these improvements is greater heatsink coverage, that lack of chipset fan, and RGB lighting across two sections. LEDs beneath the Carbon name on the southbridge heatsink are clearly visible, which isn't ideal. MSI has done a much better job on the three-sliver lighting on top of the main VRM heatsink as the LEDs are hidden away.

Speaking of heatsinks, removing the two M.2 sections reveals one of this board's strengths: SSD storage provision. The topmost slot runs off the CPU and offers full PCIe 4.0 x4 coverage, whilst the lower trio emanate from the chipset. All four have thermal pads between heatsink and drive.

Power to the Ryzen chip is more than sufficient. MSI uses seven phases that are effectively doubled-up - so 7-phase VRM tied to 14 (75A) power stages - and cooled by some of the chunkiest/best coverage heatsinks in the business. 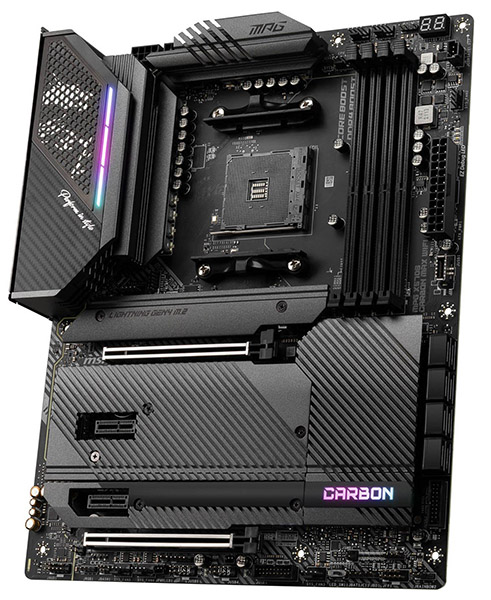 The nature of the heatsinks surrounding the PCIe x16 slot have the knock-on effect of making card removal more difficult than it would otherwise be, but this issue is common across similar boards. We don't like the postcode LED so high up on the right as it can be blocked off by top-mounted radiators in smaller chassis. And while we're at it, MSI ought to have strengthened the DIMM slots, more so for aesthetics than anything else, because a £300 board deserves that much.

5Gbps USB connectors feel a bit too far down the board while the Type-C connector, below the 24-pin ATX, is limited to 10Gbps, as is the board in general. Lighting is muted and well done, but if you don't want it, a simple switch handily toggles it all off.

Given the presence of heatsink covers, the general layout is pretty clean as MSI groups fan headers and switches on the edges of the board. The ALC4080 audio codec seems great on paper yet has the same audio credentials as the popular ALC1220 present on many competitor boards.

Eight SATA ports feels unnecessary in this day and age, and be aware that up to four are rendered unusable if you populate the M.2_3 slot with a PCIe SSD.

HDMI is handy for the latest Ryzens supporting onboard graphics. The red Type-A USB and single Type-C ports offer a maximum 10Gbps whilst the quartet of blue halve this to 5Gbps. Would 20Gbps be a stretch too far for a board of this ilk? We don't think so.

Ticking off more boxes, MSI cosies up to Realtek for the 2.5G LAN, which we reckon is becoming a must for any enthusiast-class board. MSI's Click BIOS 5 is present and correct, too.

Providing the board with part of its name, wireless connectivity is handled by the capable Intel AX210 WiFi 6E chip. Alongside integrated Bluetooth 5.2, we have no performance qualms at its inclusion.

Apart from some nitpicking with respect to USB choices and location of a few features, the MSI MPG X570S Gaming Max WiFi is a tidy offering that, as predicted, does away with the chipset fan.

Strong on power delivery and focussing on storage, let's now roll the benchmarks.