It looks like Dell is going to refresh its XPS laptop and 2020 Precision laptop workstations shortly. NoteBookCheck has grabbed an image from the official Dell site (following a Reddit tip), and since removed by Dell. The image appears to show the new laptop models which we should expect to see shortly - in the wake of Intel's recent launch of its 10th Gen Core H-series CPUs for creator and gaming laptops.

As well as a new XPS 15, there appears to be a 17-inch screen packing member of the family on the way - the XPS 17. This 17-incher was mentioned in Dell roadmaps about a year ago. In that roadmap the 17-inch model was referred to as the XPS 17 7700 Stradale with Comet Lake-H processor, and an Nvidia GeForce GTX 1660 Ti Max-Q, being readied for June. Meanwhile, the new 15-inch model should come out in April 2020, said the roadmap, with the same CML-H CPU choice, and packing a GTX 1650 GPU. 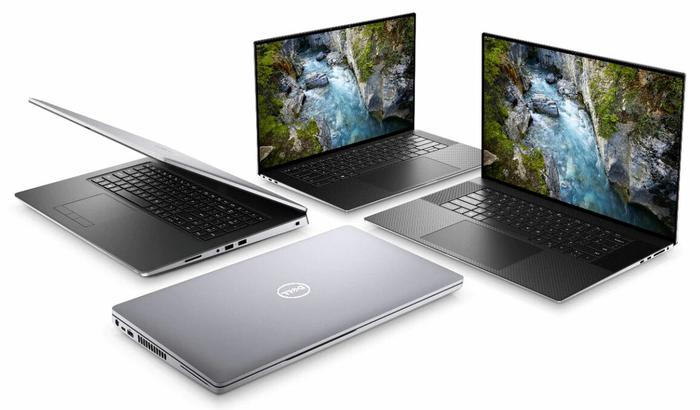 You can see the new XPS 15 and 17 in the above image upper left and right, respectively. They are easily spotted by their woven carbon fibre keyboard decks and sleek looks (click image to zoom in). The two other machines are thought to be 2020 Precision workstations.

We have a few unofficial indicators of the specs of the upcoming Dell XPS 17 laptop. A listing at UserBenchmark.com implies there will be at least one XPS 17 screen option of 3840 x 2400 pixels. This screen provides a 16:10 aspect ratio, squarer than we are used to in recent years, but continuing a trend with Dell XPS set by the new XPS 13, launched at the CES in January 2020. The benchmark detail reveals that the tested XPS 17 model was powered by a 45 watt Intel Core i7-10750H 6C/12T Comet Lake processor, packed 32GB RAM, and 1TB PCIe storage.

Dell typically offers its customers' lots of device configurations off-the-peg, so users will likely get various options for the minimal bezel display which is equipped, as well as some choice of CPU, plus RAM and storage quotas.

With these new devices still unannounced, and checking the leaked roadmap from 2019, it could be a few week before we known about availability or pricing for the new XPS 15 and XPS 17.

You don't have to leave your house to buy one either.
Posted by Output - Mon 06 Apr 2020 13:31
Until they offer configurations with AMD CPUs too, I can't see the appeal of choosing Dell (and similar OEMs') systems in the current environment where AMD offers serious performance and better value.
Posted by excalibur1814 - Mon 06 Apr 2020 14:30
Never underestimate the pull of that intel badge. It still holds weight, despite any review or reason.
Posted by Nelviticus - Mon 06 Apr 2020 14:47
If that really _is_ the XPS 17 on the right it seems a terrible shame to have omitted the numeric keypad. There's plenty of room for it.