Dell / Alienware introduced the first m-series gaming laptop with an AMD processor last week, the Alienware m15 R5. This $2,332 laptop in silky dark side of the moon finish has some attractive specs like its AMD Ryzen R9 5900HX CPU, Nvidia GeForce RTX 3070 laptop GPU, 32GB DDR4 and 1TB PCIe SSD as standard. However, some review sites, Redditors, and YouTubers who got their hands on the device at launch, noticed something curious – tools like GPU-Z showed that the laptop's GPU had been short-changed. 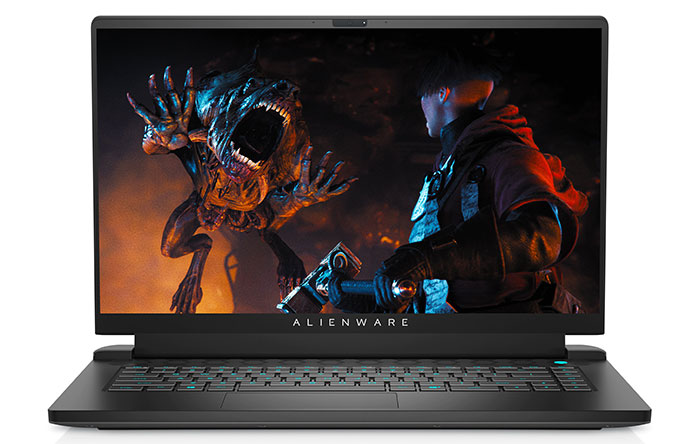 Nvidia's Ampere laptop GPUs are already something the general public need to be wary of. The GeForce RTX 30X0 Laptop GPUs are quite different to their desktop counterparts in specification. Then, they put in laptops and configured with a wide range of GPU power limits and boost clock maximums (depending on whether you have a regular or slim gaming laptop design and the resulting thermals, for example). Now it looks like systems makers have just decided to start deactivating CUDA cores, TMUs, and RT cores – without mentioning it in the specs / product pages. 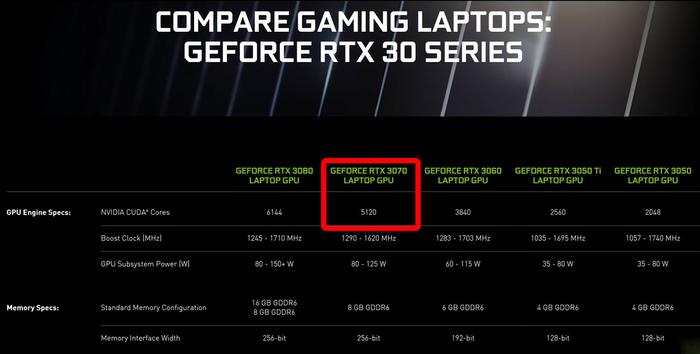 YouTuber Jarrod'sTech noticed that out of the seven or so RTX 3070 laptops he had tested, the new AMD-equipped Alienware m15 R5 appeared to be dragging its heels in his modern AAA gaming tests. Looking at GPU-Z it appeared that the GPU was 10 per cent deactivated, meaning its CUDA cores had been reduced from 5,120 to 4,608. Moreover, the TMU count has been reduced from 160 to 144, and the RT cores cut from 40 to 36. On the other hand, it is interesting to see the GA104-based GPU has 96 ROPs reported – significantly more than the 90 expected and the max for this GPU, putting it on a par with the desktop RTX 3070 in this respect. 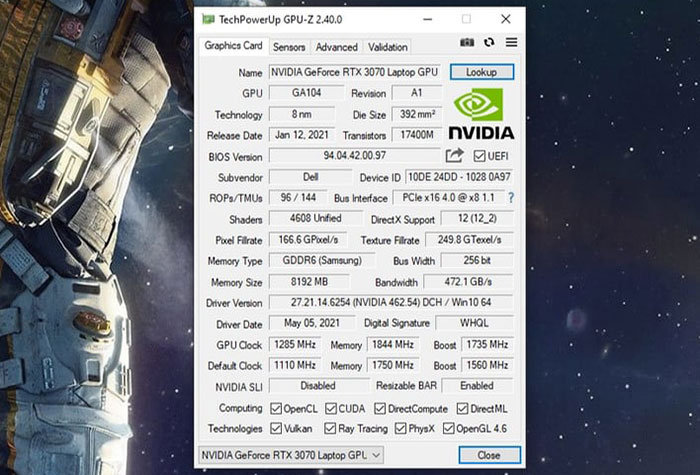 Dell responded to Jarrod's queries about the alien anomaly by saying that OEMs were allowed to tweak CUDA core counts by Nvidia in the name of "performance tuning". It went on to say that the experience users were getting had been deemed "the most stable and best performance possible," though it left the door open to unlocking further CUDA cores at a later date via BIOS updates. 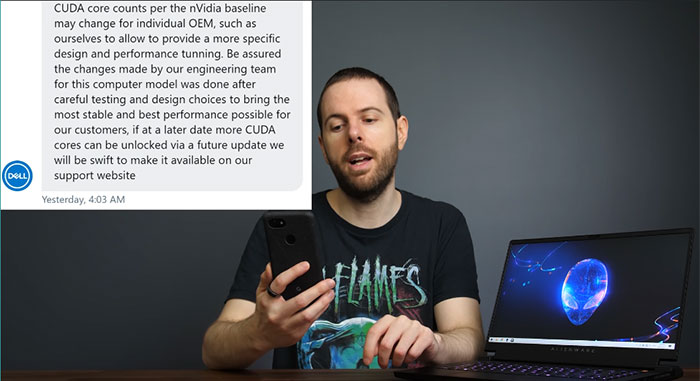 A somewhat different response on the same issue was sent from Dell to Hot Hardware. To this query, Dell said that there was an "incorrect setting" in the vBIOS. "This is an error that we are working diligently to correct as soon as possible. We're expediting a resolution through validation and expect to have this resolved as early as mid-June". Though I have read about various users fiddling with the vBIOS to grab back performance, doing so is not officially recommended – it sounds safer to have a bit of patience with regard to your current sub-optimal performance.

Posted by Terbinator - Mon 07 Jun 2021 11:12
So basically soft-locked GPUs?
Posted by Tabbykatze - Mon 07 Jun 2021 11:49
Another nail in the “What it says on the tin is not what's inside” which a lot of media sites are poking Nvidia over how obfuscated their specification is for the laptop GPUs. The fact that vendors are allowed to make a laptop, modify the GPU configuration so it's no longer apples to apples is quite silly.
Posted by rave_alan - Mon 07 Jun 2021 12:06
I guess they just have to reduce frequency. Another way it is too hot inside, power consumtion too high etc.
Posted by philehidiot - Mon 07 Jun 2021 13:00
I'm getting so tired of this. Just look at the spread of the 3070 laptop:

philehidiot
I'm getting so tired of this. Just look at the spread of the 3070 laptop: