Apple broadcast its Unleashed event a few hours ago and the undoubted stars of the show were the new MacBook Pro laptops, as expected. These new laptops retain the classic MacBook Pro look and feel, but there have been a lot of changes / upgrades since the fourth gen Touch Bar models were introduced in late 2016. Headlining upgrades include; the new M1 Pro and M1 Max SoCs, high spec Mini LED screens with camera notches, a wider selection of ports, and the replacement of the Touch Bar with a regular mechanical function key row. Two base models were introduced, one with a 14.2- and another with a 16.2-inch screen.

"We set out to create the world's best pro notebook, and today we're excited to introduce the all-new MacBook Pro with M1 Pro and M1 Max - a game-changing combination of phenomenal performance, unrivalled battery life, and groundbreaking features," said Greg Joswiak, Apple's SVP of Worldwide Marketing. "The all-new MacBook Pro adds a breathtaking XDR display, more ports like MagSafe 3, an advanced 1080p camera, and a sensational six-speaker sound system, all in a stunning new design. The new MacBook Pro simply has no equal and is by far the best pro notebook we've ever built."

Apple's new SoCs are called the M1 Pro and M1 Max. Whichever you choose, the CPU portion is the same: eight performance cores, plus two efficiency cores. Together, these cores mean that general CPU tasks run at up to 70 per cent faster than the Apple M1-based machines. Apple provided some example performance uplift figures in complex pro workflows, where realised gains were between 2x and 3x.

With the GPUs in the new SoCs, you start to see a difference between them. Apple's M1 Pro has either a 14- or 16-core GPU, and the M1 Max either a 24- or 32-core GPU. Again taking the original Apple M1 as a baseline, you can expect doubled GPU performance with the M1 Pro, and quadrupled GPU performance with the M1 Max. You can see similar factor improvements on the new machines compared to the MacBook Pro (16-inch) equipped with the AMD Radeon Pro 5600M, according to Apple. I shall repeat that, to make it very clear, Apple is claiming its best iGPU configuration is 4x faster than the Radeon Pro 5600M. I'd like to see some third-party comparative benchmarking for the new GPU configurations when these laptops become available.

It is also worth mentioning that both chips come packing a 16-core neural Engine, and the M1 Pro offers up to 32GB of unified memory and 200GB/s bandwidth, while the M1 Max delivers up to 65GB of RAM at 400GB/s. Despite the claimed firepower on offer here, battery life has been increased significantly since the previous gen Intel-based MacBook Pro was launched. Apple claims the new 14.2-inch model can play back 17 hours of video without a gasp, while the 16.2-incher can achieve 21 hours in the same test. In pro apps like Xcode and Lightroom you will be enjoying up to 4x or up to 2x batter life, respectively.

As mentioned in the intro, the screens have been upgraded to notched Mini LED panels. Within the notch, Apple has put an upgraded 1080p FaceTime HD f/2.0 camera with improved low-light performance. These have the following specs:

Turning to the topic of I/O, Apple includes three Thunderbolt 4 ports, an HDMI port, and an SDXC card reader. There is a MagSafe 3 charging port, but you can use a Thunderbolt port if you don't have access to the MagSafe 3 charger. These laptops are compatible with fast charging for up to a 50 per cent charge in 30 minutes. 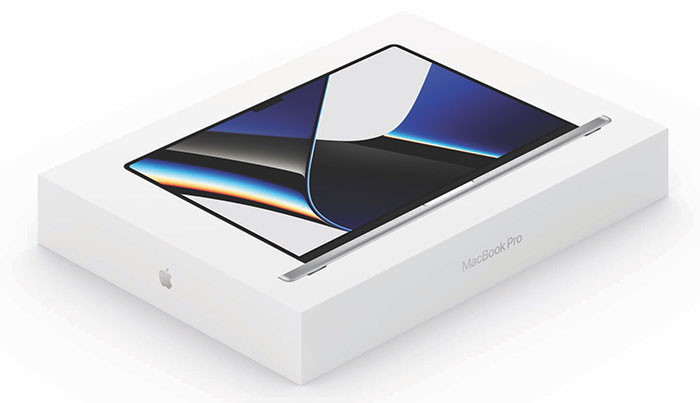 Other upgrades that are welcome include the new 6-speaker setup with two tweeters and four woofers, with spatial audio support. A new thermal design for sustained, quiet performance has been implemented, according to Apple. Lastly, I'm going to mention that Apple has done away with the Touch Bar "bringing back the familiar, tactile feel of mechanical keys that pro users love". The Force Touch trackpad remains.

Guess 400mm² at 5nm means it costs a fortune to make, and Apple are the ultimate closed ecosystem.

The 8 Core GPU in the normal M1 already got crazy results for an IGPU:

Four times that would be very impressive especially at 60W.

I am dumbfounded that they added the notch to their macbooks, I just don't understand it. They have done a lot of really nice improvements with this generation - we have ports again, we have function keys, a usable keyboard, nice performance bump…

And then they put a hole int he screen, of a £2000+ laptop. No, you'd have to be crazy to buy one of these, OR someone who permanently docks and doesnt want to use their laptop as a laptop.