The stable mate of the EVGA GeForce RTX 3090 Kingpin Hybrid AiO we saw unveiled last September has been showcased on social media. The upcoming EVGA RTX 3090 Kingpin Hydro Copper graphics card appears to be based upon the same PCB, designed in collaboration with overclocker Kingpin, but features a Hydro Copper (HC) waterblock for installation into PC systems featuring a custom LCS.

EVGA's Global Product Management Director, Jacob Freeman, published a picture of the powerful new graphics card earlier today. You get a very clear view of the card's waterblock and can see the monitor and power connectors (surface mount power connector components seen though the Perspex) but there is no sign of the cool flip-up OLED status display the AiO version rocked. Thankfully Freeman followed up to answer a question about this seemingly missing flip up display, confirming it would indeed be a feature of the HC version of the Kingpin RTX 3090 card. 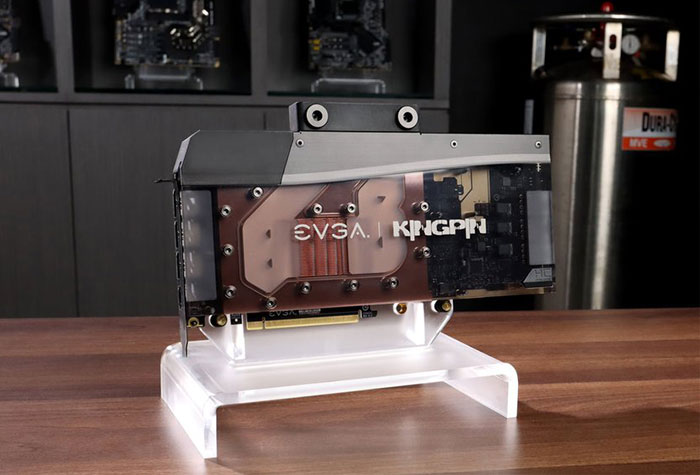 So, we know that this upcoming RTX 3090 features 3x 8-pin power connectors which will be welcomed by OC enthusiasts. On the PCI back plate there are 3x DP and 1x HDMI monitor connectors. Atop of the card you can see standard format liquid cooling loop in/out flow connectors.

As Freeman didn't share any hardware tech specs one might assume for now that it shares the out of the box GPU boost clock of 1.92GHz, the same as the Hybrid AiO version – but no one will be buying this card and running it without delving into EVGA's GPU overclocking utilities.

Last but not least, the Kingpin Hybrid AiO model costs US$1999 when available, and the FTW HC model is $1849 (again, when available), so this Kingpin HC should be priced somewhere between these price points. We don't have any word on availability.

LeetyMcLeet
They'll make 1 card a month, all reserved for 1337 TechTubers.

Yep, and they'll rip the cooling off and stick LN2 pots to them anyway - never really understood this product line.

Guess there'll be someone out there who just *has* to have kingpin cards, because they are the best in some metric or another. Lowest change out of 2 grand? Something like that.
Posted by liquidflower - Fri 08 Jan 2021 20:15
No rgb, meh

Anyway what's the performance like compared to the Founders Edition?

Are there any benchmarks of last year's hybrid aio as well?