Last week HEXUS reported on a new 3DMark Port Royal world record being achieved by overclocker Vince 'Kingpin' Lucido using an EVGA GeForce RTX 3090 graphics card with LN2 cooling. We didn't get a glimpse of the tested graphics card with that news report even though usually such records are documented with at least one shot of a frosty LN2 pot. All we had was a generic photo of the EVGA Kingpin AiO shroud from EVGA's Jacob Freeman. 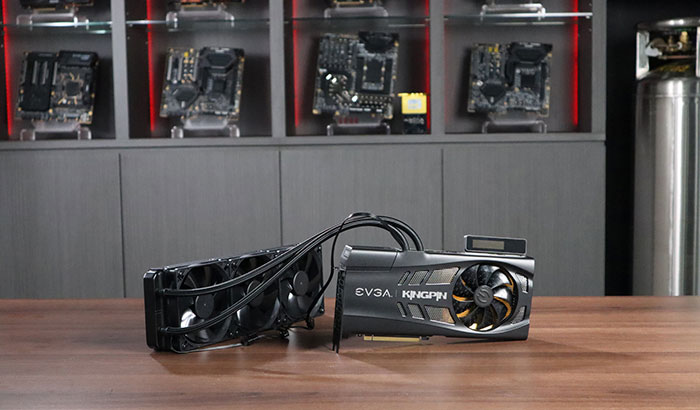 Yesterday afternoon, Vince 'Kingpin' Lucido shared an image of what looks like the consumer-ready EVGA GeForce RTX 3090 Kingpin hybrid graphics card, a post which was subsequently echoed by Jacob Freeman. Both social media sources confirmed two things; that the EVGA GeForce RTX 3090 Kingpin Hybrid design would feature a triple fan radiator, and that it features a flip up monitor screen.

The previous generation Kingpin Hybrid card had an attached 240mm radiator as part of the AiO offering. In some later replies to his photo Tweet, Freeman confirmed that there would be a "Standard Hybrid" cooled EVGA GeForce RTX 3090 which features a 240mm radiator.

The Kingpin GPU monitor screen looks quite small and it isn't described by either source, so at the time of writing we don't know how much data will fit on it, or what particular data will be able to be monitored via this screen (voltages, temps etc).

As well as the robust cooler, other features we expect to see on this or any future Kingpin graphics card include; superior power phase design, more durable components - to achieve higher clock speeds than other cards.

mark_a_scott
As this is a triple fan card, shouldn't it be a 360mm radiator?

LSG501
I really wish that when companies do this approach to cooling a gpu they would use a standard fitment to connect the pipes up and a ‘refill port’ (doesn't look to have one)… IMO if I'm paying this much money (and it's clearly going to be expensive) for something it should not have the limitations of a fixed aio.