Just ahead of the weekend the AMD Radeon RX social media team announced that it had shared more detailed Radeon RX 6000 benchmarks and comparisons. It did so to provide a fuller picture to fans - about how the new Radeon RX 6000 cards perform and how they stack up against a range of opposition GPUs.

On the Radeon RX 6000 Series graphics cards launch day, Wednesday last week, the HEXUS editor shared all the comparative performance charts AMD had supplied us with at the time. The selected charts showed one AMD GPU pitted against an Nvidia GPU which AMD saw as the direct competitor, in an FPS bar chart for the 10 AAA games titles. 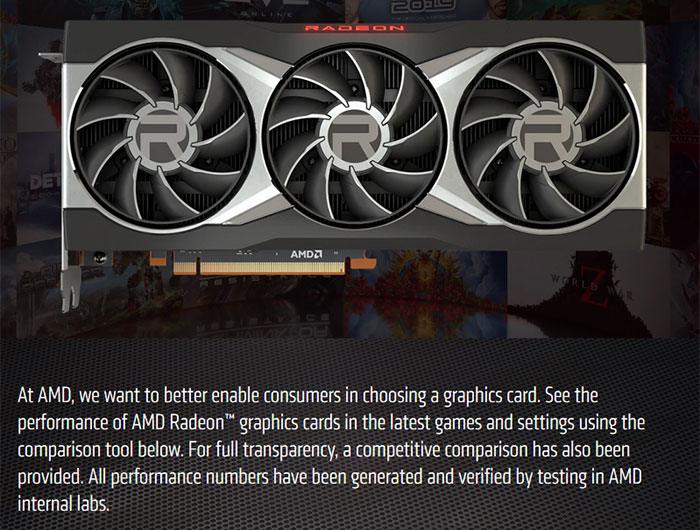 The 10 games in this new more detailed release are the same but now you can compare all of the AMD Radeon RX 6000 Series graphics cards against the Nvidia GeForce RTX 3090, GeForce RTX 3080, and previous gen GeForce RTX 2080 Ti on a per game/resolution basis. Thus, on this AMD gaming graphics benchmark page, you pick a game from the dropdown menu, choose a target resolution (1440p or 2160p), check the quality settings, and the API settings and compare all six of the above mention cards.

Three examples from the comparison tool.

I've embedded some of the example comparison charts above but it is worth a poke about the benchmarks on AMD's site yourself if you are interested in these graphics cards and any of the 10 games (Battlefield V, Borderlands 3, CoD: Modern Warfare, The Division 2, Doom Eternal, Forza Horizon 4, Gears 5, Resident Evil 3, Shadow of the Tomb Raider, and Wolfenstein Youngblood) in particular.

Remember you will have to wait until Wednesday 18th Nov for third party independent reviews and benchmarks for the AMD Radeon RX 6800 and RX 6800 XT. The more powerful AMD Radeon RX 6900 XT arrives on Tuesday, 8th December. We have recently seen AMD's AIB partners share some of their launch designs. AMD will be busy this week with the release of the first quartet of AMD Ryzen 5000 Series processors for desktop PCs, on Thursday, 5th November.

Boon72
Why such a delay on the announcement and then he reviews, you cannot make a decision without them, i wouldnt order a new card without the reviews.

This is always the way, release and embargo lift always trail behind announcement. You can't order a card yet so no decision can be made until the embargo lifts just before release date?

They also do this because they're still tying up loose ends on the lead up to release date for reviewers.
Posted by kalniel - Mon 02 Nov 2020 11:33

Boon72
Why such a delay on the announcement and then he reviews, you cannot make a decision without them, i wouldnt order a new card without the reviews.

They're not selling them yet anyway. Wait for the reviews and availability. In the meantime tech-lovers and investors do want information about the features etc. as soon as they are finalised.
Posted by mrwill79 - Mon 02 Nov 2020 11:33
I've wondered this myself. Basically on launch day you have to purchase quickly otherwise you miss out, but are buying blind as there are no reviews. Not great for the consumer.
Posted by kalniel - Mon 02 Nov 2020 11:35

mrwill79
I've wondered this myself. Basically on launch day you have to purchase quickly otherwise you miss out, but are buying blind as there are no reviews. Not great for the consumer.

You don't need to buy them on launch day, they're not going to suddenly make your existing card slower or stop working. Wait for reviews and availability.