The Asus ROG Strix LC Radeon RX 6800 XT features integrated AIO liquid cooling solution. Asus engineers were inspired to create this AiO cooled card in order to "fuse the power of air and liquid cooling out of the box". It says the LCS was designed from the ground up for the new series of cards from AMD.

Specifically, a large cold plate cools both the GPU die and the GDDR6 memory modules that circle the GPU and heat is transferred directly from there to the liquid cooling loop. At the other end a 240mm radiator was considered to be the optimal choice. This isn't the only active cooling on the Asus ROG Strix LC Radeon RX 6800 XT though, Asus also equips a low-noise blower fan and low-profile heat sink within the PCI slot shroud to keep power delivery components cooled.

The above card's stablemate is the ROG Strix RX 6800. This air cooled example is said to feature the "full complement of ROG innovations," whatever that means to you. In more concrete terms we learn that it features a 2.9 slot design with triple Axial tech fans (counter-rotating central fan), multiple heat pipes and a MaxContact base plate. Furthermore, the design's fans are aide to extend beyond the custom short PCB used by Asus, so there is a venting cutout on the backplate for better airflow possibilities.

Asus has TUF Gaming Radeon RX 6800 XT and RX 6800 cards too. It says both these graphics cards feature a "2.9-slot heat sink built for plenty of thermal headroom and quiet operation under the demands of today's highest-wattage GPUs". Just like the ROG Strix air cooled card above, these SKUs use a triple axial fan design with the centre fan spinning the opposite way to its siblings. The new AMD-powered TUF cards feature an angular aluminium shroud with full length aluminium backplates and vent cutouts due to their custom short PCBs. 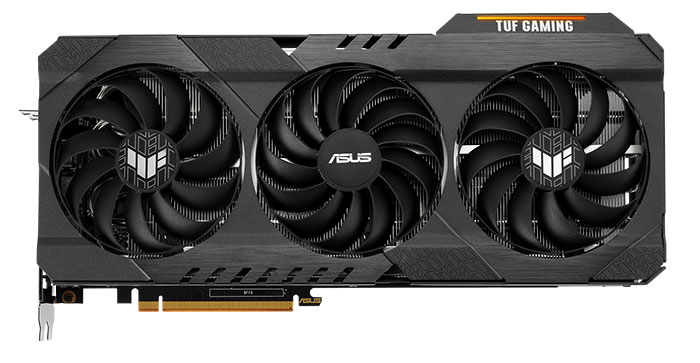 Asus says that all the above new graphics cards are built with Auto-Extreme assembly technology, feature durable components, and go through 144hr testing.

Sadly Asus hasn't filled us in with details about what exactly we should expect in terms of clock speeds from this 'OC' quartet. At the time of writing the product pages are yet to be uploaded and we don't have indicative pricing either. Remember, the first Radeon RX 6800 and 6800 XT GPUs will be released on Wednesday 18th November.

You might get to learn some more tasty morsels about this quartet during the ROG Pulse Livestream from 7pm PST tonight (2am tonight in UK) which you can catch on Twitch.

Asus is making their own competing chips now and are stealing AMDs IP and just changing the name a little bit or is it another RDNA typo ;)

Tabbykatze
or is it another RDNA typo ;)

Yoyoyo69
“feature durable components, and go through 144hr testing” - So you want me to buy a card you've been mining with?

On a serious note, I'm genuinely intrigued to see what supplies are like.

Hehe that would be a not unreasonable and profitable way to test a card for 144 hours. :)
Posted by QuorTek - Thu 29 Oct 2020 20:20
if the supplies are good at launch, then Nvidia would lose their pre-orders and pretty much the entire market for the next year or so, because people needing now or within a reasonable timeframe, would go for what they can get now, and not in a half year.