As expected, however, the PC implementations are more powerful in every meaningful respect, and Radeon RX 6000 is designed to go toe-to-toe with Nvidia's nascent GeForce RTX 30 Series as the pre-eminent choice for premium PC builds this winter. Providing context, first-generation RDNA powers the Radeon RX 5000 Series graphics processors released last July. Headlined by the RX 5700 XT, that family remains a solid choice for FHD and QHD gaming.

AMD duly goes through a few high-level details in a video released to mark this launch. Deep-dive characteristics will follow with full reviews in a few weeks' time.

How RDNA 2 improves upon its predecessor

Graphics chips based on RDNA 2 promise twice the high-resolution framerate of RX 5700 XT, made possible by a 50 percent perf-per-watt improvement allied to a more muscular design.

Putting it another way that's more meaningful for outright performance, AMD says RDNA 2 can run at up to 30 percent higher frequencies, at the same power, and on the same process node as RDNA. Adding more cores naturally pushes performance even higher.

Greater shader throughput requires increased memory bandwidth for optimal efficiency. Rather than go down rival Nvidia's path of building expensive, faster GDDR6X memory paired with up to a 384-bit bus, RDNA 2 keeps to a standard 256-bit pathway with established GDDR6. Ordinarily such meagre bandwidth is at odds with a high-performance design. AMD addresses this apparent shortcoming in a novel way with the inclusion of the so-called Infinity Cache on every RX 6000 Series chip. 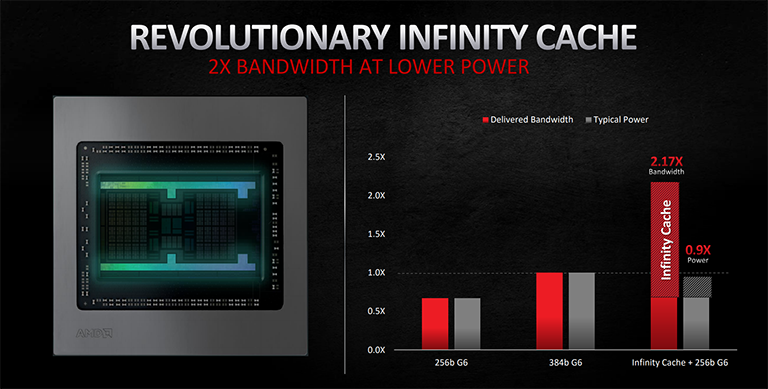 Like CPUs, GPUs carry a small amount of L1 and L2 cache for buffering operations that help keep shaders busy. Infinity Cache is the marketing name for a large pool of effectively L3 cache. RDNA 2 carries 128MB of this memory, which can be thought of as analogous to Game Cache on Ryzen CPUs. Its job is to keep required workloads on-chip as much as possible, reducing the need to go back-and-forth to regular onboard memory.

The upshot, says AMD, is effective memory bandwidth that's around twice that of 384-bit G6 alone, alongside a reduction in board power. Being critical, the downside is an increase in silicon space and, one would assume, performance variability on a case-by-case basis. Even so, AMD appears to have learned lessons from adopting expensive cutting-edge memory for previous GPUs - HBM, anyone. 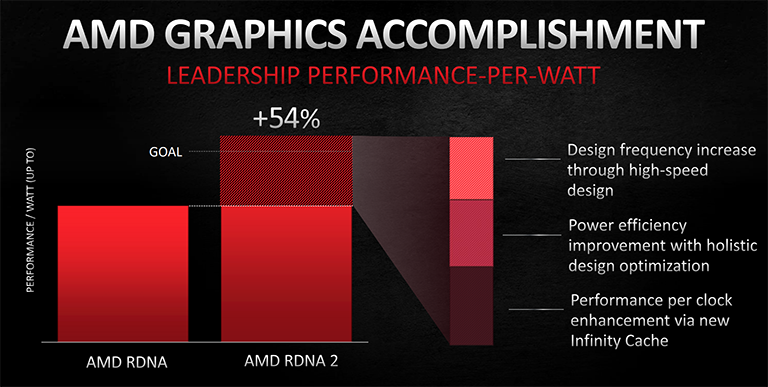 Putting these efficiency-enhancing features together is what enables AMD to claim a (up to) 54 percent perf-per-watt advantage over first-generation RDNA. And knowing that more cores are available on each DirectX 12 Ultimate- and DirectStorage-supporting RX 6000 Series GPU, it's also how AMD gets to that 2x generational improvement.

It's clear from next-generation consoles that raytracing is part of the RDNA 2 architecture remit. Little is said on this front other than the hardware-based assistance baked into the silicon offers up to 10x the ray-intersection performance versus software alone. Infinity Cache also helps in this regard, according to the company, as the large pool can hold the necessary bounding volume hierarchy (BVH) structure within on-chip memory. More will be learned later.

Architecture paints a picture of potential. Actual boards define performance. The main thrust of the family is provided by the Radeon RX 6800 XT. You may recall RX 5700 XT tops out at 40 CUs with a maximum 1,980MHz boost frequency. Under the large assumption each CU is still composed of 64 shaders, Radeon RX 6800 XT's 72 compute units bring forth 4,608 shaders at a higher 2,250MHz boost clock. 16GB of VRAM (frequency TBC) is more generous than Nvidia and the total board power of 300W is also a little lower than GeForce RTX 3080.

Compared on a best-API basis, AMD reckons Radeon RX 6800 XT is a hair faster than its GeForce rival at both QHD and UHD resolutions. AMD includes a one-click overclocking function known as Rage Mode. If you happen to have a Ryzen 5000 Series CPU paired alongside any Radeon RX 6000 Series GPU, a feature known as Smart Access Memory (SAM) enables the CPU to access the full complement of GPU memory, instead of just 256MB. It's said to offer an extra fps or two in complex scenes where the CPU historically bogs the GPU down.

In an apples-to-oranges comparison we don't like, AMD further says Radeon RX 6800 XT is faster than GeForce RTX 3080 with Rage Mode and SAM turned on. Well, Nvidia cards can be overclocked too, so this comparison is not entirely fair.

Then there's the Radeon RX 6800. Pulling in 60 CUs (3,840 shaders) it has a lower boost clock but maintains the 16GB of onboard memory, which is twice that of rival GeForce RTX 3070. Outfitted with a 250W TDP, AMD is more bullish on its comparative performance aspirations because it shows this GPU beating a GeForce RTX 2080 Ti, whose performance is practically the same as RTX 3070, at both QHD and UHD. We're not sure why AMD needs to have SAM turned on for this comparison, though. 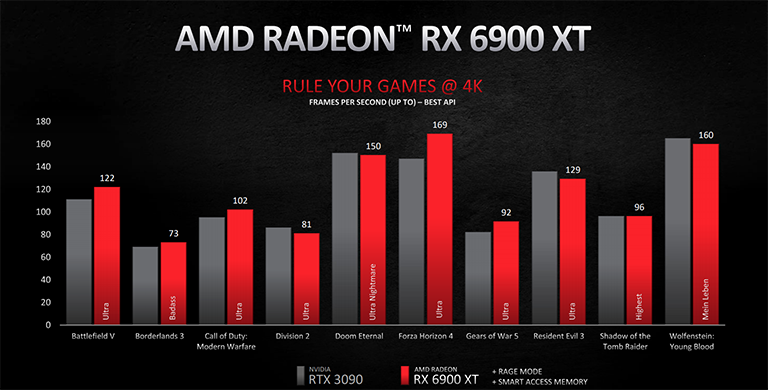 Last but certainly not least, there's Big Navi in its most resplendent form. Enter the Radeon RX 6900 XT. It uses an 80-CU floorplan equipped with the same frequencies as Radeon RX 6800 XT. Board power is the same, too, leading us to the logical conclusion AMD is using the very best-yielding silicon for this monster part. Again, rather naughtily, AMD compares its best against Nvidia's GeForce RTX 3090 by using Rage Mode and SAM.

This table illustrates what we think Big Navi looks like in retail form compared to, shall we say, Small Navi from the first generation. We'll be filling in the blanks as AMD releases more information.

Mark November 18 down in your diaries as the release date for the Radeon RX 6800 and XT GPUs. December 8 is the day for the range-topping Radeon RX 6900 XT. By that time, we'll know more about the architecture, AMD's raytracing implementation, thoughts on DLSS-like technology, stock levels, and a whole heap extra. Roll on November.

From what you have read, does Radeon RX 6000 Series meet expectations? Feel free to comment below. 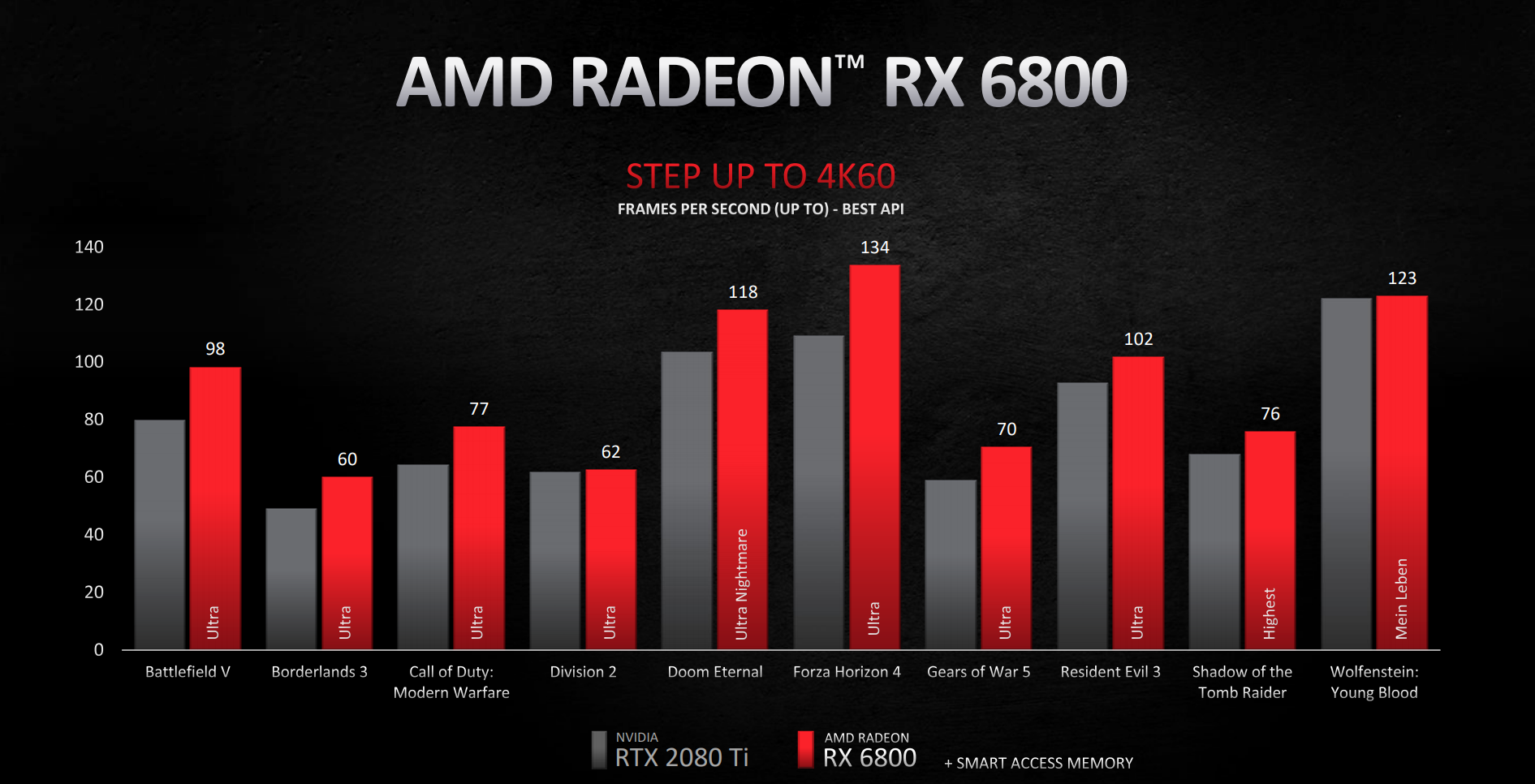 The needs of mmorpg gamers have been ignored again
Posted by Spud1 - Wed 28 Oct 2020 16:44
Good, i'm pleased they have at least got a comparable product now in “normal” scenarios - doesn't really matter if its a few frames better/worse in specific titles…the key is AMD are finally going to compete at the top end again, yey!

Too soon to say whether they will be worth it or not - we need benchmarks and for me personally, I am really interested in how well they perform with Raytracing enabled…if it lags way behind Nvidia on that score then it just rules them out for me completely.

I am hopeful though - the fact that the leaks have proven to be largely true so far, and the same leaks indicate good DXR performance as well, gives me hope they will put in a decent implementation and compete there too.

Next hope is that AMD don't screw up their actual launch like Nvidia did so people who don't own a youtube channel or who won't resort to bots can actually buy one :)