Nvidia has announced that the take up of the A100 GPU has outpaced any previous generation. It says the Ampere architecture GPUs will feature in at least 50 server designs before the year is out. Vendors such as Asus, Atos, Cisco, Dell Technologies, Fujitsu, Gigabyte, Hewlett Packard Enterprise, Inspur, Lenovo, One Stop Systems, Quanta/QCT and Supermicro are all on board, with each partner releasing multiple servers for various niches. Another big new nugget today is that Nvidia has unveiled a PCIe form factor for the A100, which will help server makers provide a diverse set of offerings - from single A100 GPU systems to systems packing 10 or more GPUs. 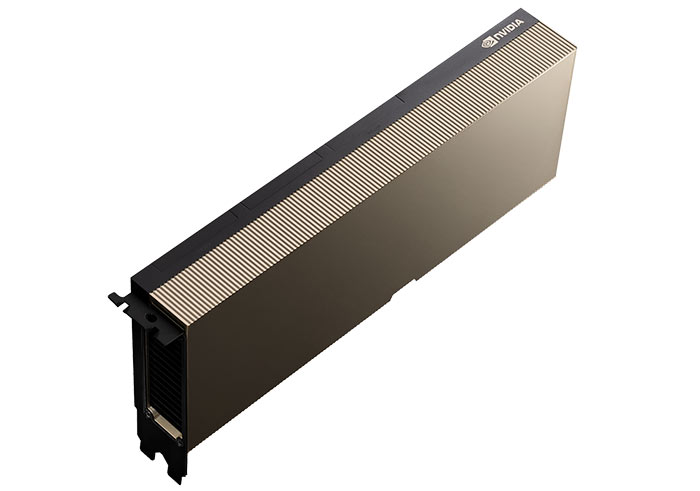 In mid-May, Nvidia CEO Jensen Huang took the wraps off the Ampere architecture and A100 GPU during his 'kitchen keynote'. The new GPU is built on TSMC's N7 process and utilises 54 billion transistors within its 3D chip stack (which includes HBM2). At the time Huang asserted that the GPU could provide "a 20x AI performance leap," over its predecessor. Other attractive qualities of the GPU are; its new multi-instance GPU technology enabling a single A100 to be partitioned into as many as seven separate GPUs, third-generation Nvidia NVLink technology that makes it possible to join several GPUs together to operate as one giant GPU, and new structural sparsity capabilities that can be used to double a GPU's performance.

If you are interested in the various distinct server offerings from the likes of Asus, Dell, HPE, and Gigabyte etc, Nvidia provides a brief rundown of the diverse models coming up on its blog. Meanwhile, providing an example of the kinds of offerings you might expect, Gigabyte has written to HEXUS with some details of its servers that can be kitted out with the newly announced PCIe form factor A100 GPU.

Starting today Gigabyte will allow customer to configure several of its G-series servers with Nvidia's latest and greatest GPU. Below you can see a table with Gigabyte's validation and release schedule.

Of particular note is the new G492 series server based on the AMD Epyc 7002 processor family, which provides PCIe Gen4 support for up to 10 Nvidia A100 PCIe GPUs. Gigabyte says that the G492 is a second gen 4U G-series server that builds on the success of its first generation G481 (Intel architecture) / G482 (AMD architecture) servers with optimised designs and scalability.

Specifically, the G492 supports up to two 280W 2nd Gen AMD Epyc 7002 processors, the 32 DDR4 memory slots support up to 8TB of memory and maintain data transmission at 3200MHz. The server's has built-in PCIe Gen4 switches deliver twice the I/O performance to let the A100 loose. For storage ,you can kit out the G492 with 12x 3.5-inch or 2.5-inch hard drives, and the backplane supports SATA / SAS / NVMe protocols.

The new Nvidia A100 GPU is supported and an optimised software stack including CUDA 11, updated CUDA-X libraries (more than 50 new ones), Nvidia Jarvis, Nvidia Merlin, the RAPIDS suite of open source data science software libraries, and the Nvidia HPC SDK