YouTube channel Moore's Law is Dead claims to have various physical details, the full tech specs, and preliminary performance indications from an Nvidia GeForce RTX 3080 Ti ES (Engineering Sample) graphics card. The 30 minute video is conveniently timestamped, if you watch it via the YouTube page, you can quickly navigate between sections such as '2) 3:40 RTX 3080 Ti Specs and Performance', for example.

When you first catch glimpse of the new GeForce RTX 30 flagship, Moore's Law is Dead says that you will find it looks similar in design to the RTX 20 series Founders Edition card, but with a triple fan configuration. This runs quiet and cool, according to the source(s) but Ampere cards "should use less energy than Turing equivalents," so coolers should be under lower stress. The ES card was fitted with two 8-pin power connectors but this is an area where ES cards very often diverge from production models. 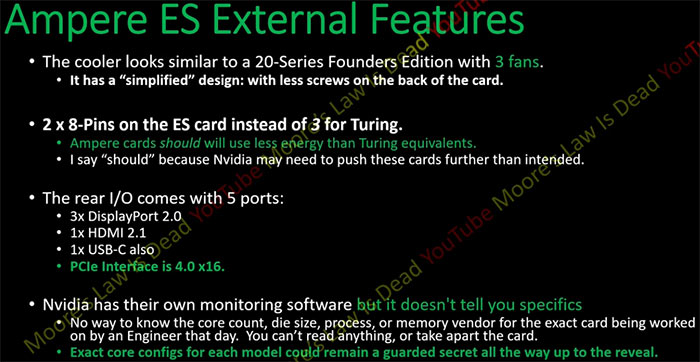 Probably the most interesting parts of the video expose, if they turn out to be true, are outlined in the GA102 Performance Specific slide, reproduced below. 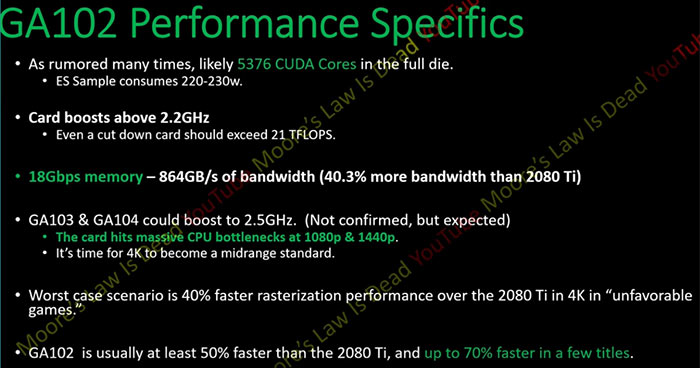 Above you can see that the YouTuber claims the Nvidia GeForce RTX 3080 Ti will come packing as many as 5376 CUDA cores which run at up to 2.2GHz or faster (exceeding 21TFLOPS) and paired with 18Gbps memory to deliver 864GBps of bandwidth. This GPU will be built on TSMC's EUV-based N7+, with lower end parts using N7 or N7P nodes, reckons the source.

If you are gaming you can expect the Nvidia GeForce RTX 3080 Ti to typically perform 50 per cent faster than its predecessor, the RTX 2080 Ti. On the topic of raytracing performance, the YouTuber asserts that "Turing was the guinea pig generation, Ampere is the next Pascal". Backing this statement up with figures is the slide below, which says that Ampere RT cores are 4X faster than Turing. Thus it is suggested that "low-end Ampere could run circles around high-end Turing in games with RT on".

Some other leaked indications with regard to Ampere performance are bullet-pointed in the slide below. 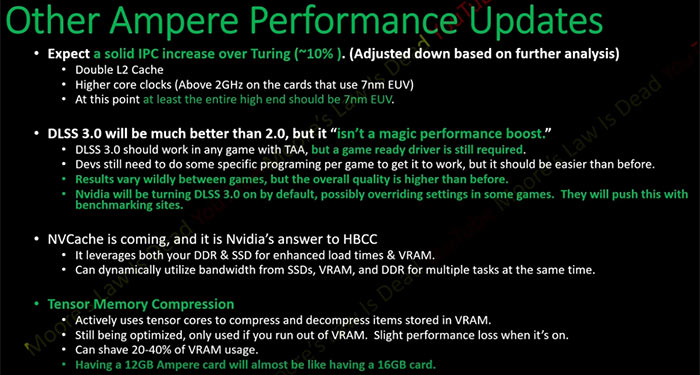 When will we get to see if the above is true, and when will we see the official announcement of consumer products like the Nvidia GeForce RTX 3080 Ti? According to this YouTube channel, the impending Nvidia GTC digital keynote will all be about HPC. Nvidia is said to be targeting a September event for unveiling the first GeForce RTX 30 cards, and as an indication of the timescale, press drivers will be ready for the release of Cyberpunk 2077, says the source.

An interesting further assertion is that the whole of the Ampere product stack will be feature RT and Tensor cores, all the way from the top (of course) to the bottom - even including the ultra-light MX parts like an upcoming MX550. Lastly, Nvidia software is due an overhaul and it will provide a better rival to the Radeon Software control panel.

In conclusion, Nvidia is thought to be pushing really hard with Ampere as it has seen evidence of RDNA2 being a very capable competitor when it reaches PCs. Reliable indications of expected next-gen AMD GPU performance have been provided by the likes of Microsoft and Sony, promoting the capabilities of their next gen consoles, which are due before Christmas.

Posted by kalniel - Tue 12 May 2020 13:09
Hard to know if reliable or not, but there's nothing unexpected there - we all knew RT was very much in its infancy in the current gen cards. What's the bet that AMD have got the better balance between rasterisation and RT performance though?

kalniel
As for ‘time 4k to become a midrange standard’, that made me laugh.