Nvidia is sticking to its role of the superstar real-time raytracing cheerleader, in order to provide some shine to its range of GeForce RTX 20 graphics cards. Today it has shared a blog post highlighting news of ray tracing and DLSS implementations in the latest PC games. The official news is headlined "Nvidia RTX Technology Comes to Battlefield V and Metro Exodus, Delivering Incredible Gameplay," but we have already had real-time raytracing in Battlefield V for a number of weeks, and I noted yesterday that DLSS had been turned on in this game in an EA Anthem story. Overall it looks like Nvidia's RTX gruel is rather thin.

Metro Exodus to get ray tracing and DLSS at launch

We've known about Metro Exodus going all-in with Nvidia RTX and GameWorks technologies since early September last year but it is good to see that such features will be ready for launch date, especially the now commonly delayed implementations meaning you can turn RTX On and switch on DLSS.

Metro Exodus is the third instalment of this popular franchise and uses Nvidia RTX for ray traced global illumination and ambient occlusion to present natural, realistic lighting effects. Developers 4A Games have worked closely with Nvidia and it s hoped that the game's dark, gritty world will come alive with realistic lighting for a cinematic quality experience.

Metro Exodus is released on PC on Friday, 15th February. 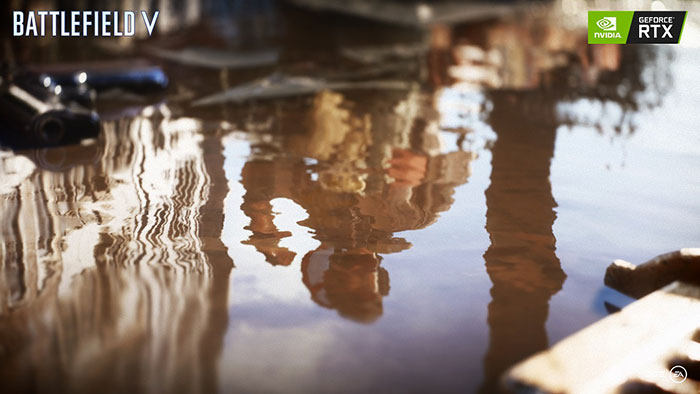 As mentioned in the intro this update was delivered yesterday. In its blog, Nvidia asserts that "Battlefield V gamers can get an up to 40 per cent performance boost with DLSS, depending on the GPU and resolution". Additionally, further ray tracing optimisations have been made to speed things up across all RTX 20 series graphics cards.

Back in December HEXUS reported upon the 50 per cent speed boost in Battlefield V with RTX On. Importantly the developers asserted that the speed-up wasn't delivered by simply "changing what the quality levels do". Hopefully, such optimisations will continue.

By the time this story is published, Nvidia should have uploaded and unlocked the blog post mentioned in the intro, the new BFV DLSS video, and the new Game Ready Driver for both the Battlefield V update and Metro Exodus. You will be able to search for the driver download here too.

Posted by Corky34 - Wed 13 Feb 2019 17:11
It's great to see DLSS being used as it almost makes up for the performance hit that comes from enabling RTX, generally they've got it down to single figures when enabling both features, it's almost enough to persuade me that Nvidia isn't trying to flog a dead horse. Unfortunately in typical Nvidia fashion they go and spoil it all by trying to artificially segment the market.

TechPowerUp
We are a bit puzzled though, why NVIDIA is limiting the use of DLSS in some ways that make little sense. For example, you can enable DLSS at 1080p only when raytracing is enabled and you have a RTX 2060 or RTX 2070. Owners of RTX 2080 or 2080 Ti don't have access to that setting (at 1080p). When you increase resolution, those limitations are lifted gradually: at 1440p all cards can run DLSS, as long as RTX is enabled, and at 4K all cards except for RTX 2060 can run DLSS, no matter if raytracing is enabled or not. While the limitation at 4K could be explained by varying hardware capabilities, we don't understand why you shouldn't be able to run DLSS at 1080p with a RTX 2080 — to reach higher FPS rates on your 144 Hz monitor for example.

At this rate people are just going to see that a game supports RTX & DLSS and avoid them like the plague.
Posted by tweake628 - Wed 13 Feb 2019 17:14
I am sure I will get sh#it for this but I am kinda let down .looks better off in some cases to me . but I can see this being really cool down the road .
Posted by Hoonigan - Wed 13 Feb 2019 17:34
Well, I can tell you that I'm sorely sorely disappointed by today's implementation of DLSS into Battlefield V.

3440 x 1440 isn't supported, despite the monitor in question featuring an NVIDIA logo. So my £1200 graphics card and £700 monitor can't run DLSS and therefore suffers terrible framerates with RTX enabled.

Likely going to be the same story with Metro and every other game that will support DLSS and RTX.

Raging, angry, upset, all kinds of emotions. About two minutes from putting the whole lot up on ebay and giving up on gaming.
Posted by Corky34 - Wed 13 Feb 2019 18:54
I'm only guessing but that's probably because it's a non-standard resolution, by the looks of things DLSS has to be ‘trained’ for each situation separately, for example it's not supported in Exodus @1080p without RTX being enabled because they've probably only ‘trained’ the AI at the resolution with RTX on.

IDK how far that goes but based on what TPU says I'm guessing the AI has to be ‘trained’ for each resolution and every instance of RTX for each card, maybe they'll patch the game or drivers with 3440x1440 at a latter date. :undecided

EDIT: Just thinking about it: If it's for each card, each resolution, and for RTX on/off, that's a lot of ‘training’ that needs to be done. 5x cards, 3 main resolutions, and two states of RTX, that's 30 AI algorithms that need ‘training’ just for the 3 main resolutions. :surprised:
Posted by Stukes - Wed 13 Feb 2019 19:42

Yeah, it sounds like that's what they have to do. I don't see how it's sustainable..