A new report on the VR-Zone technology blog discusses the prices of upcoming Windows on ARM devices. The VR-Zone team took time to ask about pricing whenever they were in meetings with manufacturers planning to produce Windows RT devices.

Previous industry rumours suggested Microsoft may sell Windows RT at a lower price, at least initially, to help establish the market and make the devices more competitive. A figure of $35 per license was put forward. However in meetings with several major vendors at Computex last week VR-Zone was told of prices ranging from $80 to $95, but most commonly $85 per license. (All prices in US Dollars).

In terms of price competitiveness an ARM tablet with the same spec running Android therefore can be $85 cheaper for the end user than a Windows RT one. How this will rub with the end users/buyers is not known until we see the devices released and on shop shelves and in internet retailers online stores. When that happens we might discover that Windows RT devices aren’t aiming at the penny pinching end of the market but want to be in or even higher priced than the Apple iPad. In a similar fashion to how Intel’s Ultrabooks are aiming to get some premium pricing action by targeting the MacBook Air market. 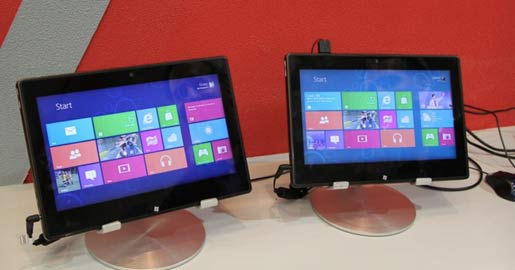 At Computex most of the Windows 8 tablets we saw weren’t looking like they wanted to compete at the lower end of the market with Android devices, so perhaps this higher pricing strategy will ring true when we see a decent amount of Windows RT products released onto the market. VR-Zone say launch-time Windows RT tablets will mostly be released within the price range of $549 to $799, with premium examples hitting the $899 region. We saw Wintel Windows 8 tablets from Acer at even higher price targets, so perhaps these price ranges will be accurate. The hardware/software combination on offer from Microsoft will have to be compelling to compete with the Retina display equipped iPad 3 available at $499 and older but practical iPad 2 models at $399.

Posted by cheesemp - Wed 13 Jun 2012 08:31
That seems really stupid to me. If microsoft wanted to fight android then ~£50 a unit extra is going to be a able hard sell. I also think it's going to be hard to compete with the ipad at that price as Apple have unusually not gone for a large mark up. It really is just cost of device plus a sensible profit. How can you compete against the market leader if you cost more? After all most consumers just think tablet = ipad. Really got to wonder what microsoft are thinking…
Posted by aidanjt - Wed 13 Jun 2012 08:45

cheesemp
Really got to wonder what micro$oft are thinking…

It's simple, really. They're not thinking beyond quarterly reports at all.
Posted by mikerr - Wed 13 Jun 2012 10:38
Just lower the price and put office in the (windows) app store - we'll all buy it anyway.
Posted by 3dcandy - Wed 13 Jun 2012 10:45
that is one solution, but I guess that doesn't help as a large percentage WON'T buy Office but use a free alternative…
Posted by Noli - Wed 13 Jun 2012 10:53
Bah, enough people are excited about this that it will still sell at that mark up.

As I understand it, x86 tablets can run full Win8 so all existing software should work but with ARM based Win RT, programs (apps) will have to be written to be compatible with the architecture, meaning all big hitting software won't work on it now (photoshop, games etc etc) in which case yes, it should be cheaper until they've established themselves and a suitable depth of software available. However, a (near) fully featured version of MS Office alone will pull in so many…