German video game developer Crytek will release Crysis Remastered on PC, Xbox One, and PlayStation 4 on Friday 18th September 2020. Co-developed with Saber Interactive, the game was originally slated for multi-platform launch in July, but a leaked trailer left so many disappointed that only the Nintendo Switch version was released on the original date.

Since the delay notice Crytek appears to have put great efforts into making sure this seminal game's remaster won't disappoint. For example, last month it said it would be implementing Nvidia DLSS technology and hardware-based ray tracing using Nvidia's VKRay Vulkan extension, for PCs with Nvidia GeForce RTX GPUs. Furthermore, the following will be implemented when the remaster ships:

"Can it Run Crysis?" graphic mode

As we approach the release date, Crytek has decided to tease a new mode which will arrive exclusively on PCs. Via the game's official Twitter account the first in-game screenshot from the new 'Can it Run Crysis?' graphic mode was shared, as reproduced below. I have embedded the original screen from the social media post without recompression and you can see it if you click on the image (4K, 3840 x 2160 pixels image). 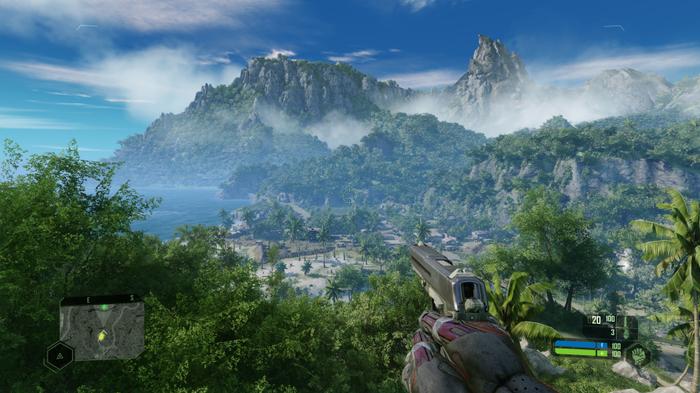 Accompanying the screenshot, Crytek says that the new mode is "designed to demand every last bit of your hardware with unlimited settings - exclusively on PC". Briefly, the PC remaster screenshot appears to have highly saturated colours with impressive distant draw detail and lighting effects. Some Crysis fans, like Eduardo Vasquez, have posted their original game screenshots from a similar vantage point in the game, for comparison.

Crysis Remastered is a timed Epic Games Store exclusive on PC but it is not yet possible to pre-order. You can check out the minimum and recommended PC specs for the remaster via that link though.

Not sure how many times I've done the campaign playing it like that, it's highly enjoyable.

I did do a balls to the wall maximum strength playthrough once but it was easier to just kill everything from afar.

The only crowning glory to most hated things in games ever is the bloody VTOL escape mission!