Crytek has written to HEXUS to inform us that Crysis Remastered is now available for PC, as well as the PS4 and xBox One (it was already available on the Nintendo Switch). PC gamers may not be very pleased that the remaster is an EGS exclusive, where it costs £27.99/$29.99/€29.99.

As a reminder, this seminal sci-fi sandbox first person shooter builds upon the 2007 original's single-player action gameplay with upgraded with remastered graphics, including high-quality textures, improved art assets, and more. On PC it supports hardware-based ray tracing using Nvidia's VKRay Vulkan extension on launch and Nvidia DLSS technology will be added soon. On consoles this is the first outing of Crytek's software-based ray tracing engine.

At the beginning of September HEXUS reported upon the PC exclusive Crysis Remastered mode - the 'Can it Run Crysis?' graphic mode. This mode pushes quality settings to the max at 4K and is "designed to demand every last bit of your hardware with unlimited settings - exclusively on PC," said the developers. PC Gamer talked to Project Lead of Crysis Remastered, Steffen Halbig, about the demands of the game yesterday. In case you are wondering if the new GeForce RTX 3080 is up to the task of mastering this graphics mode, the answer is no. "In 4K, there is no card out there which can run it in 'Can it Run Crysis mode' at 30 FPS," asserted the Crytek exec.

If you wish to play the remaster on your humble home PC don't be put off though, the official minimum and recommended PC specs aren't that high. You can check them out below: 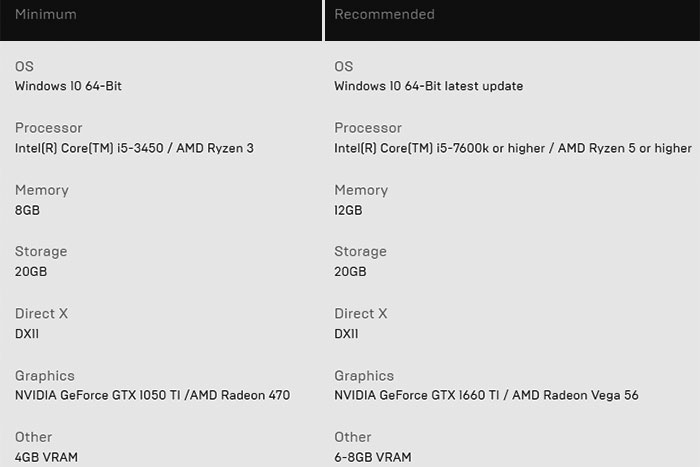 As I mentioned in the intro, Crysis Remastered is available right now for PC, PS4, and Xbox One, costing £27.99/$29.99/€29.99 on PC. PC gamers who take the plunge and buy this game within the next three weeks on the EGS will receive a Crysis soundtrack and wallpaper as bonuses.

I think we're looking to Unreal Engine for that experience now maybe? Not that anyone has put the level of effort in required afaik.
Posted by lumireleon - Fri 18 Sep 2020 13:38
FS2020 is the ultimate benchmark.
Posted by Yoyoyo69 - Fri 18 Sep 2020 13:52
Meh…
Posted by QuorTek - Fri 18 Sep 2020 14:03
I don't get the hype, if you just set the engine to or have made a really bad one as this one would go under… it is easy for them to say that, that would not be possible due to they can just put in whatever wedges and overall critical bad programming abilities.

The Boast more or like is… can you make a worse engine than ours.
Posted by KultiVator - Fri 18 Sep 2020 15:30
It's also easy to over-egg the pudding, e.g. texture resolutions that are overkill and which just hog RAM in the GPU without providing a concrete visual uplift (simple example, but a lot of the eye candy follows similar principles of diminishing returns above a certain threshold).