Activision started to roll out the latest update for players of Call of Duty: Modern Warfare and Warzone yesterday (this morning in UK). However, rather than the game and its features trending on social media, the considerable download required by gamers updating the title on PC, Xbox One and PS4 established a Twitter trend - '84GB'.

The developer, Infinity Ward, had flagged ahead of time that the Call of Duty: Modern Warfare Season 4 update would be large. Community Manager, Ashton Williams, took to Twitter to warn users to be prepared for a hafty download. She explained that "In order to reduce the overall disc space that MW and WZ take up, we're compressing a bunch of assets." Unfortunately that seemed to mean replacing all the assets users had already downloaded. Williams added that "We're continuing to sweep all assets to make size reductions where we can, and also further optimize future patches for size," before reminding players to uninstall modes and DLCs which they don't play, to save disk space and download time. 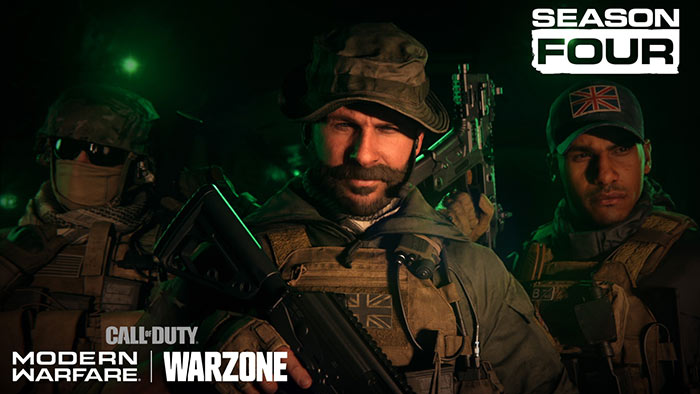 Unfortunately for some the download sizes that were offered as updates seemed to be much larger than those touted by Activision. Gamers were told to expect the following downloads: 45GB on PC, 32.375GB on PS4, and 44GB on Xbox One. However, as noted by EuroGamer, many Xbox owners were faced with nearly double that, 84GB, hence the Twitter trending topic. Activision Support says it is investigating this matter - perhaps it will do so in time to benefit users who have yet to instigate the update. 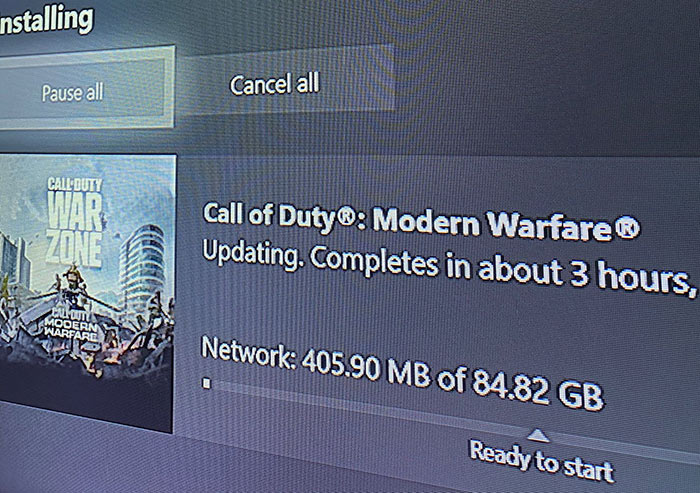 HEXUS commented upon the size of the Call of Duty game files, when the F2P Warzone expansion was launched and meant 100GB+ downloads for many. Moreover, Warzone was downloaded 50 million times in its premiere month, which must have burned quite a lot of energy on both sides of the internet pipe.

EuroGamer observed that a complete Call of Duty: Modern Warfare experience on your PlayStation 4 (pre-Season 4 update), took up 190.1GB on your hard-drive. Thankfully, after this sizable update is applied the whole caboodle will be just 4GB larger - due to the replaced assets, as per Ashton Williams' explanation.

With a popular modern AAA games weighing in at as much as 200GB, the next gen consoles will need to up the ante with their standard built-in storage capacities. We know they will be much faster this time around using SSD as standard. There have been leaks ahead of today's scheduled Sony PS5 event (1pm PDT, 9pm BST), dubbed 'The Future of Gaming', that indicate SKUs with 1TB and 2TB of storage will be available at launch (in an Amazon listing priced at £599). However, Sony has previously officially touted an 825GB custom high performance drive as standard, with user expansion available via NVMe SSD slot.

Posted by cheesemp - Thu 11 Jun 2020 14:22
I have a 1Tb Xbox one and that's constantly full and I don't game all that much on it. As we move towards a future of services such as Xbox game pass this is only going to get worse. It wouldn't be too bad if we all had FTTP 300mbps connections but I'm stuck on 20mbps.
Posted by [GSV]Trig - Thu 11 Jun 2020 14:26
I've only been playing CoD since Warzone is free, the number of large updates are shocking, although, it does show they are fixing stuff, I would rather the Warzone installer be separate from the main CoD though as I should imagine there's loads of stuff that the updates give us that isn't needed for CoD…
Posted by Gentle Viking - Thu 11 Jun 2020 14:50
Aaaa the good old days, when a game could fit on a DVD :-)

I totally get people on a not fast internet connection get pissed off, i would for sure be that if i was in that situation,, and someone made games i would like to play.

Sadly i have the connection, but no one make a single bloody game i would like to play.
which for me at least are just about as frustrating.


I really thing games should be able to fit on a DVD, and then if you liked to and have the computer to run it, you could update to kick ass graphics ASO with a substantial download ( maybe at a slight extra cost )

Me personally i would have no problem playing a good game, even if it just had graphics like say the first far cry game, and i dont even think i would bother with a graphics texture ASO update over download.
I just want to Dl game fix - map fix - cheat fix over download,,,,,, not the whole bloody game.
Posted by udisy - Thu 11 Jun 2020 15:00
Laughts in 56Kbps modem noises :surprised: :crazy:
i'm guessing, next updates should be smaller then?
Posted by chj - Thu 11 Jun 2020 15:03
This was the reason i uninstalled in the end, my SSD was getting full.