Nvidia's GeForce Now streaming service existed a lengthy beta test period to become a free/subscription service last week. As it went prime time it was broadly welcomed as delivering particular value to PC gamers, who already have a goodly selection of games which were sync-able with the service (via Steam, Epic GS, Battle.net and Uplay etc). However several big names game publishers have pulled out from supporting the platform since it was launched for the masses.

On launch date several published who once supported GeForce Now (and previously Nvidia Grid) decided not to give permission for their games to be streamed via the out-of-beta service. Capcom, EA, Konami, Remedy, Rockstar, and Square Enix games were all absent from the available streaming list last week - even though the gaming individual might own these games. This wasn't a blip in service implementation but a business decision by the publishers mentioned. 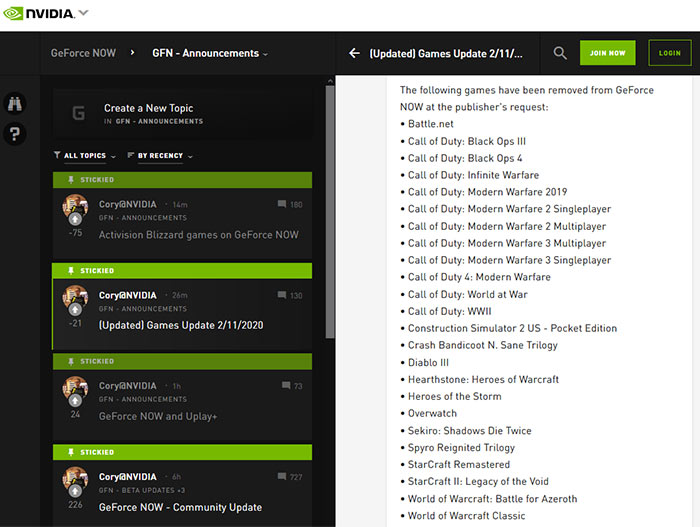 An Nvidia representative, active on the official GeForce Forums, has responded to the action of Activision Blizzard in removing its titles from the playable streaming games. You can see the long list of removed titles in the screenshot above. Cory@Nvidia stated that GeForce Now will continually add and remove games, just like many other digital service providers. He noted it was unfortunate that all Activision Blizzard games will be removed from the service, however Cory added that "we hope to work together with Activision Blizzard to reenable these games and more in the future". On a more positive note Cory said that "In addition to the hundreds of games currently supported, we have over 1,500 games that developers have asked to be on-boarded to the service." We are told to watch out for games availability update in the forums.

Posters, like this one on the official Blizzard forum, are currently pleading, reasoning and compelling the publisher to reverse its decision to make its games unavailable via GeForce Now. However, as mentioned above, Activision Blizzard is far from alone in this move away from the Nvidia GeForce Now platform. 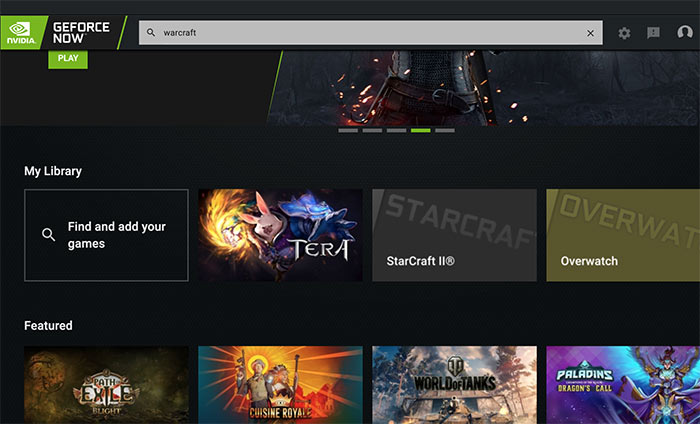 Nvidia has been in touch with The Verge since Activision Blizzard's move, and the impression is that "you shouldn't expect [Activision Blizzard games] to magically reappear after a few days (or even a few weeks)". Nvidia didn't want to discuss revenue sharing deals it may or may not have with publishers but of course these decisions will have been made by publishers with an eye on £$s. It is expected that the streaming gaming industry landscape may drift towards the proliferation of offerings we have seen trend in the streaming TV/movies market.

Posted by EvilCycle - Wed 12 Feb 2020 14:53
Honestly, I don't like the idea of signing into my game accounts through Geforce Now. Call me paranoid but I feel a vulnerability waiting to happen there.
Posted by Zak33 - Wed 12 Feb 2020 15:12
i guess this issue is that you might opt in, start to subscribe, then not be able to play the games you could the week before, even though you own them, and then need to opt out again and buy a new graphics card that WILL run the game.. then find they are back on the list a few weeks later when the streaming servicde signs the biggest income deal from nVidia or Strava or who ever else joins the race.
Posted by Zak33 - Wed 12 Feb 2020 15:14
then, when one service (say Strava) gets one game, and another service (say Geforce Now) gets another game.. you need to buy both games AND subscribe to both services.

and it will still be cheaper than buying a 2080 RTX

messy isn't it? and relatively no lube available
Posted by LSG501 - Wed 12 Feb 2020 15:18
Ah the joys of competing ‘subscription’ services where the ‘owner’ of whatever it is (we don't actually own subscription stuff) can just pull it whenever they like….. usually due to ‘money’ and the only people that end up being screwed over are the subscribers.

All these ‘it’s just £10 per month' packages soon add up
Posted by Wrinkly - Wed 12 Feb 2020 15:19
I can't blame Activision as cloud gaming is garbage and would only tarnish their products.