EA has been busy trying to manage a huge backlash concerning its recent Star Wars Battlefront II release. At the weekend a redditor complained of the excessive costs to unlock heroes such as Luke Skywalker and Darth Vader - 60,000 credits at the time, equivalent to US$80. Rather than paying extra cash, it is possible to earn that amount of credits from playing through the game for approx 48 hours total. 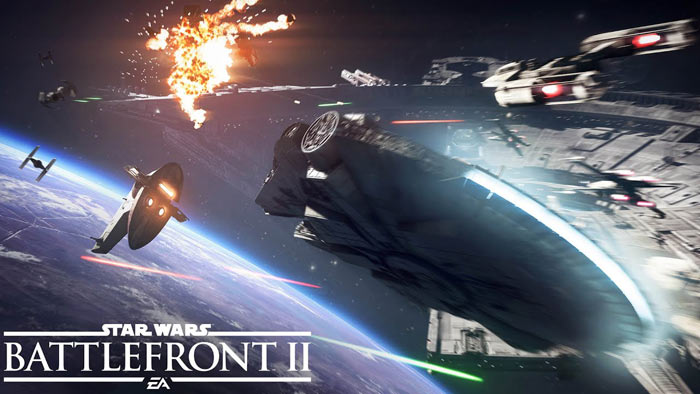 As a measure of the gamer ire displayed, a reply to the original complaint on Reddit, by the EA Community Team, received nearly half a million down-votes in its first day (now totalling - 630,000). These are record breaking totals for any topic ever discussed on Reddit. The henpecked EA contributor said that the high credit prices for heroes was judged "to provide players with a sense of pride and accomplishment for unlocking different heroes" (or you could spend two minutes and use real cash for the unlock). Furthermore, readers were informed that these costs were decided upon from monitoring the open beta. In a more conciliatory tone, EA said it will be "making constant adjustments to ensure that players have challenges that are compelling, rewarding, and of course attainable via gameplay".

Now it seems like the weight of the protest has had some effect already. EA/DICE has now implemented some big changes to the credits / microtransaction amounts. John Wasilczyk, Executive Producer at DICE, relayed the credit cutting decision on the EA blog. After a preamble about how the developers make adjustments to gameplay and other mechanics though beta and play test stages, and that "making games great comes from regular tuning," Wasilczyk got to the point to spell out the following:

"We’re reducing the amount of credits needed to unlock the top heroes by 75 per cent. Luke Skywalker and Darth Vader will now be available for 15,000 credits; Emperor Palpatine, Chewbacca, and Leia Organa for 10,000 credits; and Iden at 5,000 credits. Based on what we’ve seen in the trial, this amount will make earning these heroes an achievement, but one that will be accessible for all players.

It's a big change, and it’s one we can make quickly. It will be live today, with an update that is getting loaded into the game."

Adding some further soothing ointment to the wound, Wasilczyk focussed further on positive gaming changes that are on the way. He talked about how well received some aspects of the game were, including Starfighter Assault, 40 player MP battles, Darth Maul lightsaber throws, and more. There will be further updates and changes to improve the game in the over time, it was promised. We already know about some free DLC and lots of daily challenges on the way (see image below). 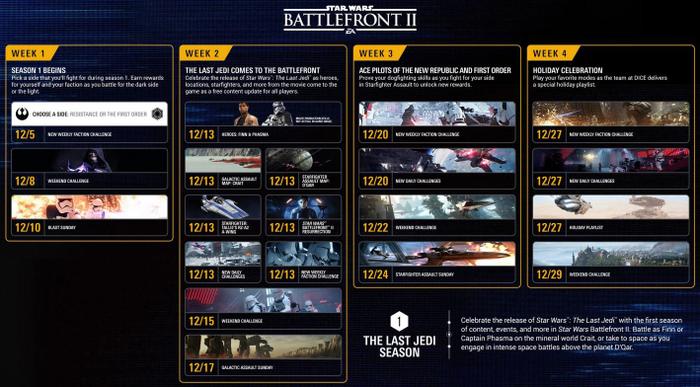 Star Wars Battlefront II hasn't even hit its full-blown worldwide release, scheduled for 17th Nov. It has only so far been made available to Deluxe Edition buyers and via trials available to Origin Access and/or EA Access subscribers.

If you want to chat and influence the game and its development you can take part in the Reddit AMA with some of the key leads from the EA/DICE team. Join via the Twitter link, once it has been announced by EA (planned for Wednesday).

Posted by Spud1 - Tue 14 Nov 2017 13:17
Battlefront 2 really divides my opinion at the moment and is a near perfect case in point for the whole micro transaction issue.

The chief problems it has being:

1) Cost of unlocks is high relative to the rate you can earn in-game currency. The cut in hero rates really helps, but its still going to take you 10 hours of gameplay without unlocking anything else to get just 1 of the locked heroes.
2) The rate you earn credits is based purely on time spent in game, and has no relation to your in-game performance. There are “challenges” that can supplement this to some degree, but they are almost all “get X number of kills with Y” and reward tiny numbers of credits. EA have stated they intend to change this so that your reward is partly performance base, but no indication of timescales for it. To give an indication, the cheapest loot crate is 2400 credits and the most you can currently earn per match (based on a 20 minute, 40 player galactic assault that runs to the end where defenders win with a bit of overtime), is 480 credits. More typically you'll get 200-300 per match. You get the same regardless of whether you are top of the leaderboard and MVP, or have sat AFK for the whole match.
3) It's partly “pay to win”. Now in truth, the P2W elements of this game are nowhere near as dramatic as many people make out (especially reddit!) as the impact of an unlocked upgrades is actually pretty small and typically has a negative impact somewhere else. An often used example is the fact that the upgraded “heavy” weapon you unlock for free when you pre order has double the damage of the standard weapon. Thats true, but it also has a lower fire rate requiring you to be much more accurate depending on what you are shooting at. The “star cards” do have a greater effect though and they are a problem.

The thing is though, the game itself is really, really fun. The gunplay is pretty good and a huge improvement over the 2015 battlefront, the maps are mostly well thought out (with a couple of exceptions) and the starfighter handling is the best i've seen since X-Wing back in the 90s. The graphics are excellent and the whole game is dripping in fan service.

Ultimately I enjoy the game enough to just ignore the micro transaction element and get on with having a good time, but EA have really shot themselves in the foot with this one. For me personally, just fixing point 2 above (credit earning rate) would solve it enough that i'd be happy - but for many others its too late.
Posted by ksdp37 - Tue 14 Nov 2017 13:20
EA, bunch of money grabbing crooks. Gone are the days where you just paid a flat rate to purchase the game and got the entire package.

Nowadays, pay a full amount for half a game, pay some more for the remaining half via DLC and then pay more for in game unlockable content.

Like my Android games on PC this is becoming….
Posted by Moogly - Tue 14 Nov 2017 13:28
Just in case anyone thought EA suddenly grew a moral compass, they have removed the refund button from their customer portal. You now have to call customer support to cancel your pre-order.
Posted by daddacool - Tue 14 Nov 2017 13:29
First they asset stripped our games to charge us for DLC and we did not speak out because we enjoyed the multi player more.

Then they brought microtransactions into full priced titles and we did not speak out because we could short cut the challenge of playing for a couple of quid….

Spud1
3) It's partly “pay to win”. Now in truth, the P2W elements of this game are nowhere near as dramatic as many people make out (especially reddit!)

I'm assuming you've seen it, but look at the downvotes on this post by EA. Higher than the previous most-downvoted post by a factor of 20. (And somehow 70 gold? You could have bought the heroes instead…)