At the AMD CES 2020 keynote on Monday evening the upcoming latest and greatest consoles from Microsoft and Sony didn't really get much more than a passing mention. The presentation was already pretty jam packed with details of AMD's new and impending CPU and GPU tech. However, a video shown off during the keynote provided a glimpse of the new Xbox Series X, showing the rear of the machine for the first time in a 360 degree animation…

Shortly after this illuminating reveal, AMD backpeddled (perhaps prodded by Microsoft) and admitted to The Verge that "The Xbox Series X imagery used during the AMD CES press conference was not sourced from Microsoft and does not accurately represent the design or features of the upcoming console," and confirmed the TurboSquid sourcing of the imagery.

Thurrott.com reports that the port selection shown in AMD's video wasn't accurate but several insider sources known to the site have indicated that the following ports will be present on the rear of the Xbox Series X:

On the front is a USB-A port, even though USB-C seems to be the direction of travel for most modern devices. Please remember that the port selection could change ahead of finalisation and shipping of retail hardware.

Both Microsoft's Head of Xbox Phil Spencer and Sr. Director of Hardware at Xbox, David Prien, have taken to Twitter to share Xbox Series X SoC imagery. Spencer was first to share a chip shot, which is unfortunately shared at a measly 400px square. The Xbox boss is currently using it as his profile pic on the social media platform. I've Photoshop zoomed it a bit for embedding below. 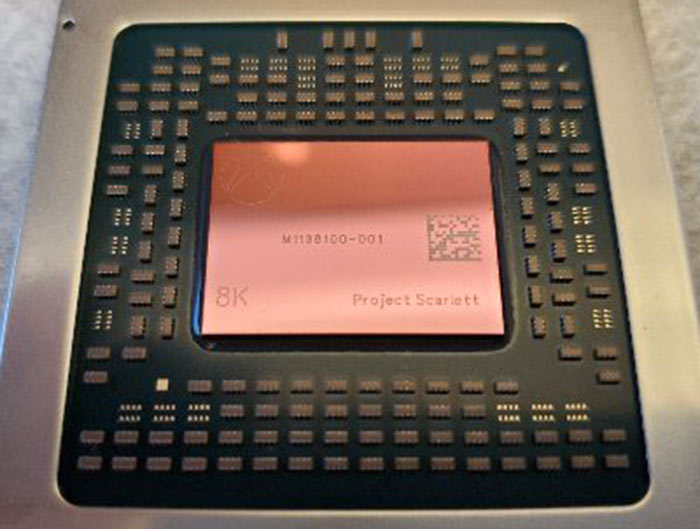 You can quite clearly see the inscription on the SoC; an Xbox logo features to the upper left, then as we move down the image there is a serial number and QR-code, '8K' is also inscribed upon the heatspreader, which finally includes the words 'Project Scarlett', lower right.

After Spencer was bold enough to share the image, his associate Prien shared a picture of a tray of eight Xbox Series X SoCs - with one missing. He joked "Guess Phil found my missing piece". 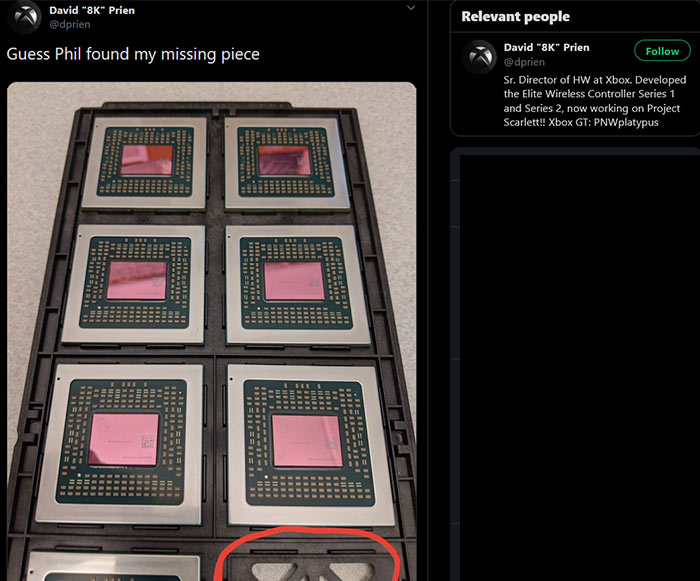 The Xbox Series X was most recently featured in the HEXUS news pages when its SoC was "independently verified," as featuring 56 custom Navi CUs. This GPU section accompanies eight Zen 2 CPU cores with SMT.

Posted by watercooled - Wed 08 Jan 2020 18:47
Interesting! I thought use of chiplets for at least the CPU cores was likely. Die size looks to be in the ballpark of 400mm2: https://www.reddit.com/r/Amd/comments/elbqhg/xbox_series_x_die_size_math_analysis/
Posted by lumireleon - Thu 09 Jan 2020 09:06
At AMD CES 2020 Laura Smith (Director, Radeon tech) said Sony and Microsoft will launch the new flagships next year (2021)
Posted by cheesemp - Thu 09 Jan 2020 10:26
I'm currently trying to decide whether to upgrade to a new ryzen pc at the end of the year (Probably 4000 series when its out along with a 5700 or better) or buy an Xbox Series X. Either way I guess AMD are happy! They really mopping the floor with CPUs and GPU wise outside of the ultra high end (I can't afford) competitive.
Posted by Lord Midas - Thu 09 Jan 2020 17:28
“2x SuperSpeed USB-A ports,”

Interesting, where was that said? Consoles are typically released leading up to Christmas but Christmas 2021 seems way too far off for this hardware.