One of the biggest announcements at the AMD keynote yesterday evening was of the Ryzen 4000 Series mobile processors. These mobile APUs will be delivered in 15W U suffixed variants for ultra portables and 45W H suffixed variants for gamers and creators. With the launch of these new APUs, and co-operation with systems making partners, AMD hopes to make some significant inroads to the laptop market. AMD also introduced a pair of new entry level Athlon mobile chips (Gold and Silver), and will at a later date be outlining some Pro series APUs.

So, at last, AMD's 7nm Zen 2 cores are on the way to laptops delivering IPC gains and greater power efficiency to portables - which often need to rely on battery power for several hours. The introduction of Ryzen 4000 Series mobile processors means "unmatched performance, graphics, and longer battery life to ultra-thin and gaming laptop users," asserted Saeid Moshkelani, SVP&GM, AMD Client Compute, in a press release. Already AMD is looking at wider market adoption of its mobile processors and has secured over 100 design wins for 2020 from the likes of Acer, Asus, Dell, HP, Lenovo, and others. The first Ryzen 4000 laptops will arrive in Q1 but the trickle should change to a torrent as the year progresses. 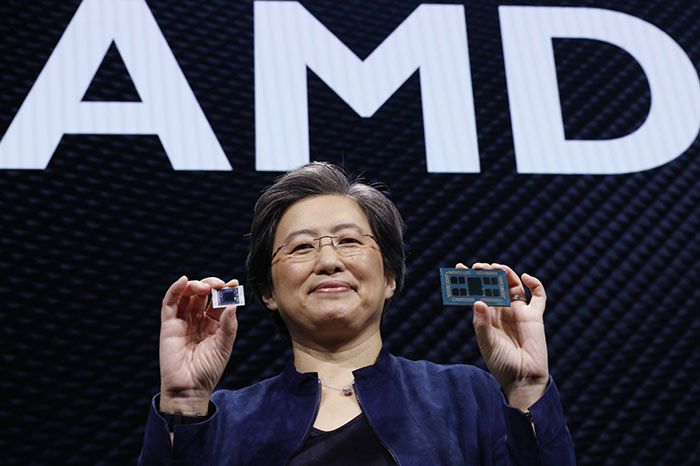 The headline appeal for power users will be the availability of an 8C/16T processor for gaming and content creation at 45W (H Series), and a slower clocked 15W (U-Series) option for those who prefer their powerful portables to be ultra-thin and light. According to AMD's own testing the flagship processors in both the H- and U-sereis offer the following:

As well as up to 8C/16T on the CPU side, these processors offer an integrated Vega GPU with up to 8 GPU cores. Some might be disappointed that AMD hasn't upgraded these first Zen 2 APUs with Navi graphics, and it maxes out at 8 CUs - compared to 11 on the Ryzen 3000 Series APUs. However, AMD claims that this is an optimised version of the Vega GPU with "59 per cent more performance than the previous generation" - delivered by a mix of architecture optimisations and refined process tech.

AMD likes to share performance comparison charts to show its products pitched against the competition. With regards to the Ryzen 4000 Series mobile processors it shared some interesting slides comparing its best APUs in the U- and H- Series with Intel rivals. Examples below show you a productivity based comparison with the Ryzen 4800H vs the Intel Core i7-9750H (left), and 'Gaming on the go' pitting the Ryzen 7 4800U against the Intel Core i7-1065G7 (below right).

Something else AMD wanted to highlight at CES 2020 was AMD SmartShift technology, which intelligently optimises computing experiences on Ryzen 4000 Mobile Processors. The tech dynamically adjusts the power balance between CPU and GPU cores to "deliver up to 10 per cent greater gaming performance and up to 12 per cent more content creation performance"

Wrapping up, below you will find a specs comparison table for all the new SKUs. Watch out for Partner laptop announcements at the CES too, there have already been some interesting designs revealed featuring the Ryzen 4000 Series mobile processors.

gagaga
8 cores @ 2GHz in 15w? Wow.
Wonder if the middle-ranking versions of these will manage madvr at 1080p. Would make a great NUC sized Kodi box.

Aye, I just saw that and pointed like the monkey from family guy.