Microsoft's preliminary reveal and teasing of its foldable Surface Neo and Surface Duo portables seemed to catch a lot of consumer and industry interest last October. Microsoft has a good reputation in recent years with its modern and inspiring Surface hybrid hardware designs. We know there will be quite a few me-too devices, or variations upon this theme later in the year when the hardware and software is ready - Intel Lakefield and Microsoft Windows 10X is going to be a combination we will be seeing a lot of in the ultra-portable PC category. 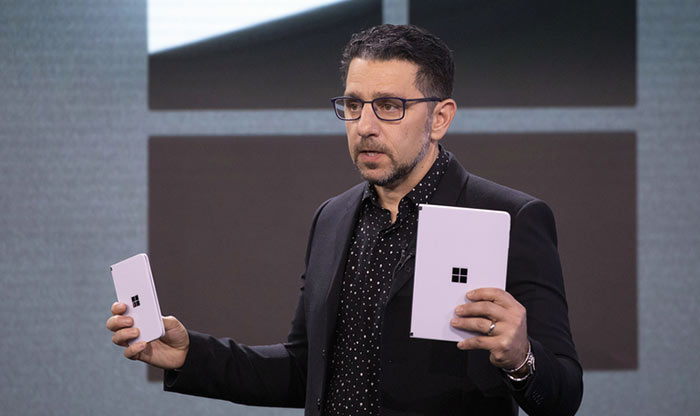 The Microsoft Duo is an Android foldable device done the Microsoft way, and doesn't need to wait for such fanciful things as Lakefield. It seems like it is a bit further down the road to being consumer-ready - earlier this month a Microsoft employee was spotted twiddling with a Duo on public transport in Vancouver. We saw it being used in the original teaser video back in October, with a few of its dual-screen tricks and inking skills demonstrated.

Now Microsoft Windows centric leakster Walking Cat has released a couple of videos on Twitter showing some thoughtful additions to the Surface Duo UI - which weave the (un)folding action into the smartphone-style skills on offer.

Above you can see an animation where the Surface Duo user opens the foldable slightly to peek for any updates. Revealed on the right side of the screen - which would be the most visible section if you hold it slightly ajar - you can see some familiar Android-a-like status notifications. At the top you see the time/date, and beneath that looks like a list of messages which could be emails of SMS etc. The messages can be expanded slightly like modern Android allows by pulling down. Messages can be easily dismissed by gesturing to the right, off the visible edge of the device.

In the next video we see how peek works with calls. We assume the Surface Duo is vibrating or ringing (video has no sound) - and then the user decides to peek at who it is. It seems like the user is happy to answer a call from Owen Small, so moves from an initial peek flex of the foldable to open the device fully and answer the call. In the video it doesn't seem like fully opening the Duo auto-answers the call, the answer button looks like it is jabbed. Hopefully this behaviour could be customised in the settings. 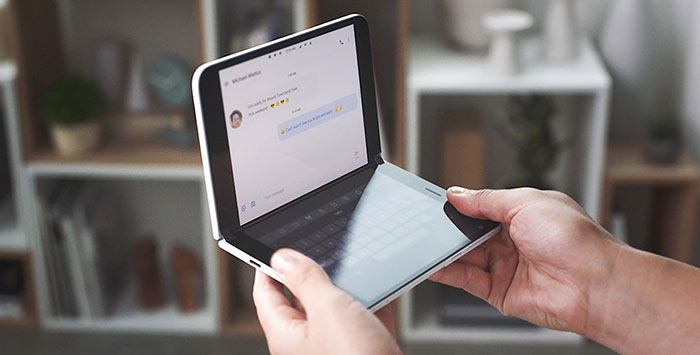 The Microsoft Surface Duo is expected to arrive in Q4 this year, in time for the gift-giving season.

Posted by philehidiot - Thu 27 Feb 2020 13:12
I really like the surface duo but I have a couple of issues. It seems just slightly too big for a phone - I think it needs to be a little narrower. The other issue is that, due to the width, you're going to use the keyboard as shown in a kind of laptop manner. Without being able to locate your fingers or thumbs by feel, you're going to struggle to do any real typing. The issue then becomes one of giving up some portability of a phone and not gaining enough in usability.

These devices would be awesome if the screen could add / remove a tactile interface on its surface, such as a couple of notches on F and J as well as raised outlines to keys. Then remove them for normal use and viewing. At the moment, I can't see me getting on with this kind of interface. I clung onto physical keyboard devices for as long as I could.
Posted by thewelshbrummie - Fri 28 Feb 2020 19:25

philehidiot
These devices would be awesome if the screen could add / remove a tactile interface on its surface, such as a couple of notches on F and J as well as raised outlines to keys. Then remove them for normal use and viewing. At the moment, I can't see me getting on with this kind of interface. I clung onto physical keyboard devices for as long as I could.

This beats the point of a dual screen device if you're adding raised notches for a keyboard. To me, it's designed so that either screen could be the keyboard based on preference - raised notches on both screens would be annoying and one would (un)intentionally push the user towards using one screen as a keyboard. Clearly you're someone who would love a phone with a physical keyboard - either the market decided they weren't selling enough, or OEMs decided it was cheaper to not make them (while increasing prices to improve margins). Not saying there isn't space for such a device, but the Surface Duo isn't trying to be that.

What you're advocating for is not what the Surface Duo is trying to do. I see it as a similar proposition to using a PC with 2 monitors - I'm thinking of writing papers with one screen devoted to a browser, the other for a word processor. Whether that scales or has a suitable use-case for mobile is the question. That said, I certainly prefer the idea of 2x screens over a foldable.