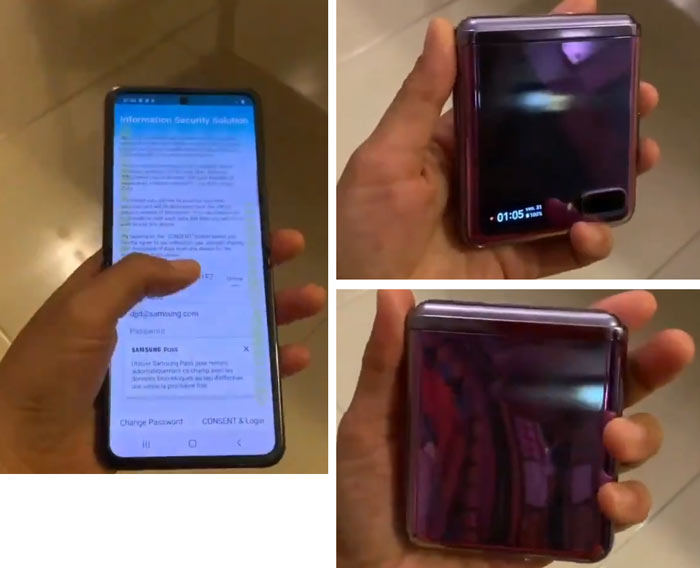 Watching the video (embedded below) you will see that the device starts off as a nicely compact device which would be quite comfortable to pocket or squirrel away in a small bag to carry around (it's designed to be like a Lancôme makeup compact). Initially we see the device closed with the status display off and twin camera /flash array towards the bottom edge of the phone, pointing towards us.

The user opens up the device single handed without too much of an effort / stretch - and this user seems to have small hands. Unfurled the phone looks extremely elongated - the aspect ratio is pushing the boundaries of devices we have seen before. There doesn't seem to be any unsightly creasing here. If anything closing the device seemed a little easier than opening it and there is a satisfying 'clack' as this completes.

Once closed the status display is active and it appears to display the following: a notification dot, time, date, and battery level remaining. One might expect to be able to customise what is displayed on this small 'glance screen'.

Previous leaks and rumours point to the following key specs for the Samsung Galaxy Z Flip: a 6.7-inch, 2,636 x 1,080 screen with flexi-glass covering it, a Qualcomm Snapdragon 855 Plus SoC with 8GB of RAM, 256GB storage but no headphone jack or microSD storage.

Expect to see the Galaxy Z Flip unveiled officially during Samsung's Unpacked 2020 event on Tuesday, 11th Feb. It might be available soon afterwards (in time for Valentine's Day) but it sounds rather pricy at the rumoured €1,500. HEXUS published some very clear leaked marketing photos of this second gen foldable and the official Unpacked 2020 teaser video last week.

That damn hole on the inside screen though, just kills it as a device. Shame, I would have been interested :(
Posted by edmundhonda - Mon 03 Feb 2020 14:11

Spud1
thinner than the fold which is a plus

Its thicker, folded or unfolded. (According to the leaked data, at least)
Posted by Spud1 - Mon 03 Feb 2020 14:24
I thought the opposite on the last leak I saw. I guess we'll find out for sure in a week or so
Posted by KultiVator - Mon 03 Feb 2020 15:08
Yeah, as suspected, looks like a chunky gimmick - and one that doesn't really fix any issues that I need solving. Foldable schmoldable.