HEXUS got a firsthand look at the resurrected Motorola Razr mid-November. This impressive blend of new technologies and old school flip phone styling is set to become the first clamshell foldable smartphone with flexible OLED screen technology. It is thought that this form factor might do a lot more to mainstream foldable screen phones than the troublesome Samsung Galaxy Fold did. In essence this 72mm x 94mm x 14mm folded device opens to present an expansive 6.2in 'FlexView' display. Just like the Razr of old it has a useful smaller quickview screen visible when closed.

Well done then Moto, for being first to market with this form factor - but wait, there are going to be some delays... Bloomberg interviewed Motorola President Sergio Buniac on Friday who informed the financial news site that his company needed more time to ready stocks of the new Razr before fulfilling retailers. 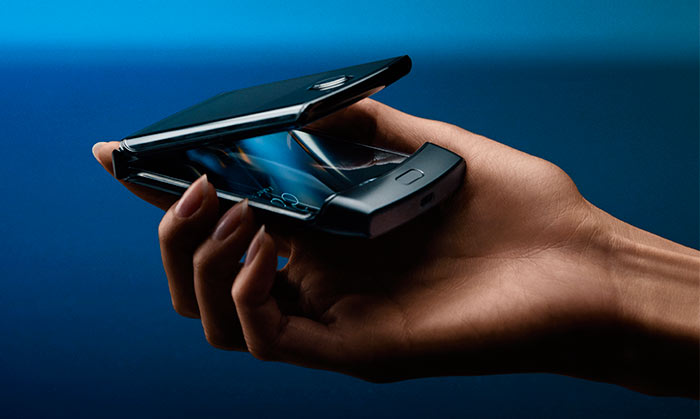 The new Moto Razr was supposed to become available for pre-order this month with shipments to customers starting in January. Buniac said that "Motorola has decided to adjust Razr’s presale and launch timing to better meet consumer demand". It wants to make sure that "more consumers have access to Razr at launch," and it sounds like it hasn't built up enough inventory as yet to avoid disappointing lots of would-be customers.

Unfortunately Motorola didn't even sketch out a replacement timetable for pre-orders and availability. Rather the exec would only say that there wouldn't be a significant shift from the original launch timeline. As well as the US, the new Moto Razr will be made available in Europe, Latin America, Asia, and Australia sometime in 2020. It will retail at approx US$1500.

Just ahead of the weekend the purported first live images of the Samsung Galaxy Fold 2 were shared online. Originally released on a Chinese social media platform, the photos spread rapidly on Twitter in short order. Ben Geskin reproduced five shots of the clamshell Samsung Galaxy Fold 2 from various angles, and added that the screen diagonal of the unfurled device measures 6.89-inches and has an aspect ratio of 22:9.

The above device looks comparable to the Motorola Razr reboot in many respects. However, if one of the Korean media based rumours comes true, Samsung should gain the upper hand in the retail stakes. At the start of the month we heard that Samsung will officially unveil its portrait orientated foldable at MWC 2020. The disruptive assertion that it will be priced at around a million KRW, which is about USD$850 or GBP£650 is one of the more interesting aspects of the device though. If you think hterefore this Samsung might come with middling specs - one must remember that the Razr isn't exactly a modern powerhouse with its Snapdragon 710 SoC, 6GB of RAM, and 2,510mAh battery.

Gentle Viking;4161032
I think with these fold able phones, instead of cracking the screen, people will be destroying the hinge.

They said that about many other foldable devices. None of mine ever broke, from Gameboys to phones to laptops, and those I knew of that broke theirs did so through abuse and carelessness. It happened no more often than smartphone owners cracking their screens.

£650-odd is not cheap, but neither is it a thousand iPounds for some brands' latest models!!
Posted by Gentle Viking - Thu 26 Dec 2019 21:30
Indeed, but people are going to stick their phone in the back pocket of jeans,,,,, if they are not yet so addicted they cant even have it out of the hand.
As i understand it ( as a very casual phone user ) that's how many a phone screen get cracked, and why review sites do bend tests.

I would prefer if the half's lock in place in some way when closed to you cant shift the 2 parts sideways, and i doubt you can make the hinge strong enough to take that load in the long
run.
And maybe that's why the Moto phone have that thing at the bottom, cuz that should assure a fairly strong closed state.
If it was just 2 similar half's i would be doubtful as to durability if you put phone in back pocket,,,,,, and i think that are still what a lot of people will do, not least with a phone “made” to do that.