A cache of official Samsung Galaxy Note10 Lite has been uncovered by WinFuture editor Roland Quandt. The range of images covers front and back and side views in multiple base colours but not really any glimpse of the top or bottom edges. These are a much more comprehensive set of images of the Galaxy Note10 Lite than those shared by @OnLeaks a fortnight ago. The original Samsung Galaxy Note10, 10+ and 10+ 5G smartphones launched in early August, and were followed up by a Star Wars Special Edition last month. 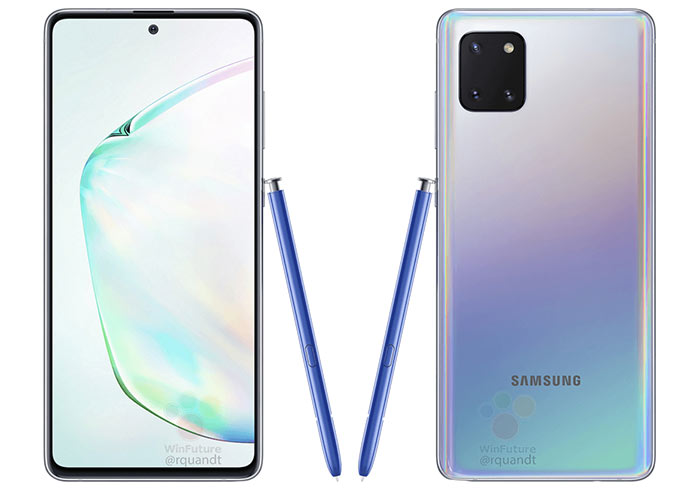 Of course we can't draw much in the way of conclusions regarding the tech specs of the upcoming Samsung Galaxy Note10 Lite from marketing images alone but there might be enough to spark your interest if you are going to be in the market in 2020 for an Android phablet with stylus and Samsung design/engineering without the deep pockets required for the latest full-fat Note10.

The first impressions you will probably get from checking out the images from WinFuture are that this Note10 Lite offers a flat screen experience like the Galaxy S10e, and in the upper middle of this OLED display is a single point punch-hole camera designed for selfie duties.

On the side it is notable that Samsung has put both the volume rocker and power button to the right as you look at the display. This is an improvement on the Note10 with its power key on the left, according to some. One can just about see that the S Pen silo stays on the right when facing the screen. Furthermore, there looks to be a slight indentation visible to the lower left, which could be a 3.5mm headphone jack port. 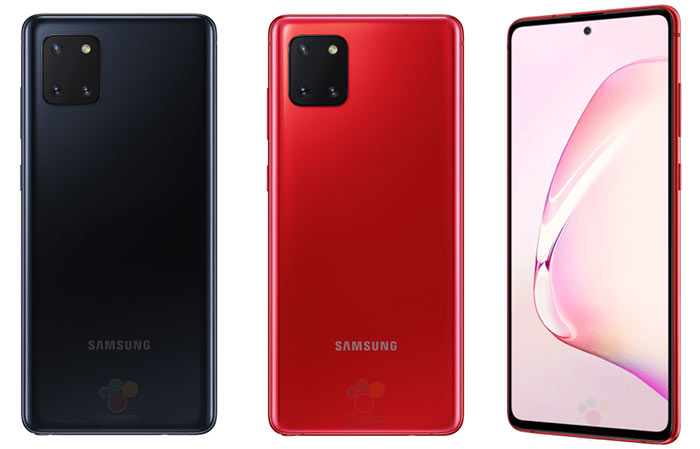 Moving around the back there is an upper left rounded rectangle block featuring a trio of camera lenses and a flash. WinFuture reckons that the camera array will feature a main camera with at least 48MP as well as alternative wide-angle and telephoto choices. Samsung's recently announced 108MP ISOCELL Bright HMX sensor isn't likely to arrive on a 'Lite' product in the near future.

Likewise, under the bonnet Samsung isn't going to spec one of the newest and most powerful processors available. The source speculates it will stick to the still very potent SD855, which is about to be superseded by the recently launched SD865. If this choice offers good cost savings when the Note10 Lite arrives then it might be a good call. Other unconfirmed details are that the Galaxy Note10 Lite will come with a new S Pen that is connected via Bluetooth 5.1.

Last but not least, launch pricing for the Note10 Lite is touted to be €670 in Germany.

We're sick of being robbed, want our 3.5mm jack, don't need annoying wrap around screens which make it harder to hold the devices and make it more likely we'll drop them and shatter that expensive glass, fingerprint magnet casing. I wouldn't mind the hole in the screen sodding off as well, but I'll take what I can get. The only question with this phone is whether this or an older flagship would be better.
Posted by Yoyoyo69 - Thu 19 Dec 2019 17:49
I second the above. I will not make the mistake of buying Samsung again.

The scree is of no use, the scene is activated by the hand you hold it with, as the edges of the screen curve around.

The battery is atrocious, after a few weeks you there is a noticable drop off in capacity.

Within months you're forced to charge several times a day with light to medium use
Posted by mtyson - Thu 19 Dec 2019 20:43
Commenters above: This is like the Galaxy S10e in that it doesn't have a wraparound screen.
Also, from pixel peeping, I think it does have a 3.5mm headphone jack.
For me it would attract if it also has; 4,000mAh battery or better, plus dual-SIM / micro-SD.
Posted by philehidiot - Thu 19 Dec 2019 23:34
I've been amazed to see phones come out with no microSD card slot.

It's an absolute essential for me. Back ups, shifting very large videos off the main memory when on holiday / for editing on PC, setting up audiobooks on the PC and then just dropping it into the phone… loads of reasons aside from pure capacity.
Posted by iworrall - Fri 20 Dec 2019 06:14

philehidiot
I've been amazed to see phones come out with no microSD card slot.

It's an absolute essential for me. Back ups, shifting very large videos off the main memory when on holiday / for editing on PC, setting up audiobooks on the PC and then just dropping it into the phone… loads of reasons aside from pure capacity.

It's for those reasons I invested in a 64GB double ended (USB A / USB C) memory stick.