Samsung has been rather busy at its Developer Conference (SDC19) in San Jose, California. It has hosted various talks and presentations, as well as delivering some interesting new product announcements, like its first Project Athena laptops due starting this December. Much of the stuff discussed at SDC19 wasn't very exciting to the public, even among Samsung fans - news about features such as Bixby, Knox, SmartThings and so on don't cause much of a stir. However its smartphones and innovations in this market are big news. Despite this, Samsung shared lots of blog posts about the SDC but only gave its teaser of a new foldable form factor a passing mention.

Samsung US shared the above video clip via its Twitter feed, commenting that "attendees of SDC19 got a sneak peek at a brand new form factor Samsung is exploring for the foldable category of devices". The video shows the current Galaxy Fold transforming into a vertically folding handset, let's call it the Galaxy Fold V, and the UI adapting to the change in the hinge angle. 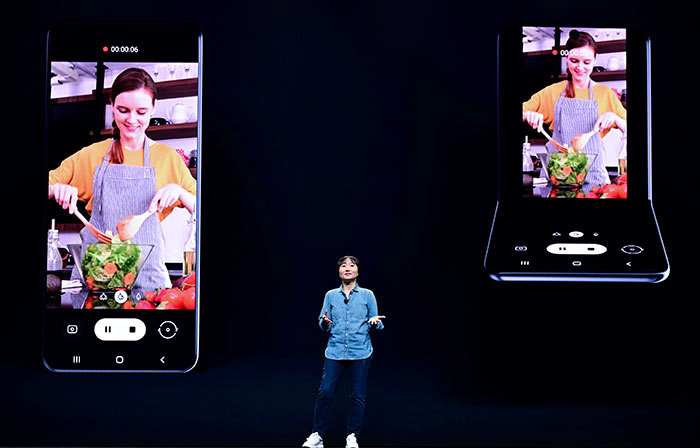 Commenting on the new form factor, leading tech industry analyst Patrick Moorhead noted that this tease follows the SDC18 tease of the Galaxy Fold, which materialised a few months later. Importantly he thinks that this new foldable "could be the volume runner, much thinner, smaller". 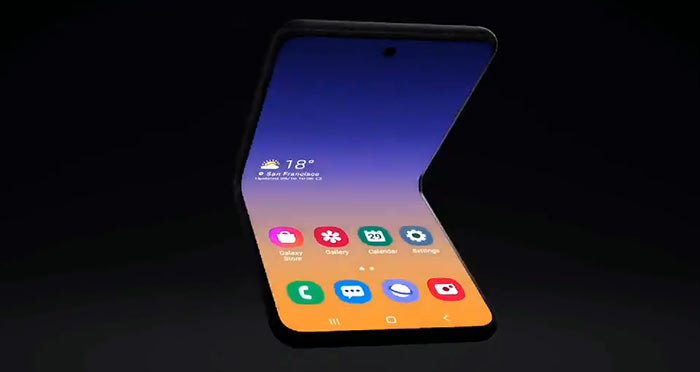 Earlier news we saw regarding the next-gen Galaxy Fold pointed to the use of an improved UTG (Ultra Thin Glass) screen from Dowoo Insyhs. This change from transparent PI (polyimide) could eliminate the unsightly creasing effects in the middle of the display.

Remember that Motorola is closing in on its RAZR foldable smartphone reveal, with a device that is expected to flex much like the Galaxy Fold V is shown doing in the video embedded at the top of this article. In a HEXUS report earlier this month we revealed that Motorola's launch / reveal event for its first foldable has been scheduled for Wednesday 13th Nov, in Los Angeles. It is going to be quite a lavish presentation, going by the firm's description of the event.

MajorZod
Seems like the logical thing to do seen as the first folding phone was such a massive success with no issues.

I think portable devices with a single, folding display, as apposed to a dual screen foldable, are a blind alley manufacturers won't keep going down for long.
Posted by tparmenter - Wed 30 Oct 2019 16:17
I think we will see a lot of folding phones in the future. They will wear out quicker and will have a shorter life span than standard ones. Phone companies constantly complain that not enough people upgrade regularly enough.
Posted by Ttaskmaster - Wed 30 Oct 2019 16:50
Looks good to me… and I might even buy it if there's a Star Trek Tricorder app for the UI - I mean, with a form-factor like that, why else are they making it so?
Posted by FRISH - Wed 30 Oct 2019 17:22
I've seen some people ask for this, but it sounds like a gimmick to me. Do we really want to pay more to fold a phone with no extra screen space? Old flip phones made sense because then it made room for the keypad, but we don't use those anymore so it just seems like new tech for the sake of new tech despite potential flaws with a foldable screen. At least with the fold you had a bigger screen, although it is too expensive for mainstream use.

In regards to the comment to shorter lifespan phones, it is kind of funny how they want devices to be replaced more even though devices cost way more than they used to. I do find it odd how accepted that seems to be. Not that I support Apple, but the support for android devices is pretty crap, even the pixel lineup isn't as good as I'd expect for the money you spend. In the past it wasn't so much of an issue since people wanted to upgrade with the better specs you got down the line, but now smartphones are becoming increasingly “good enough” that there is less desire to upgrade as often.