...we feel as if the RTX 2080 Ti is a performance monster of today with the ability to go even faster tomorrow.

Let's get something obvious out of the way first: the Nvidia GeForce RTX 2080 Ti is the fastest consumer graphics card on the planet. Period. Taken over seven titles featuring specific games engines, the performance uplift at 4K over the GTX 1080 Ti is at least 33 per cent. The lead is closer to 40 per cent on newer titles that hammer all facets of the raster engine. It is the first true 4K60 card.

Is near-40 per cent enough when comparing GPUs spaced 18 months apart, especially when the new head honcho is not available for less than a grand? The answer would most likely still be yes because those after the absolute best desire more performance almost irrespective of the cost. We'd image there are GTX 1080 Ti owners out there already laying down cash for the RTX 2080 Ti because it is manifestly faster. You know how important bragging rights are to this group.

Even so, a 30-50 per cent performance uptick is to be expected when you move from one architecture to another. Nvidia knows that and thus built the rasterisation engine - the method by which all of today's games are processed - accordingly. The CUDA cores do more work, there are more of them, memory bandwidth has gone up, and so forth. All sensible design decisions, and if it were those features alone inherent in this design, then this card would be called the GTX 1180 Ti.

But sheer traditional throughput is not what RTX is really about. Nvidia wants to improve image quality and performance in one fell swoop, and it is harnessing forward-looking technologies such as ray casting and machine-learning-based DLSS to do so. Technologies only available on RTX silicon.

In its optimum performance form, with a game that takes advantage of DLSS technology, RTX 2080 Ti has the ability to be twice as fast as GTX 1080 Ti whilst rendering better-looking imagery. The fundamental caveat for this performance nirvana is that game engines integrate DLSS sooner rather than later, plus throw in some lovely-looking ray tracing to boot, so we feel as if the RTX 2080 Ti is a performance monster of today with the ability to go even faster tomorrow.

That brings us on to the RTX 2080. Understanding that it's around 25 per cent dearer than the GTX 1080 Ti - £750 vs. £600 - and, on average, only a few per cent faster at 4K in most of the games we tested, puts it in a sticky situation if you only think about present-day games. A more elegant design cannot mask that observation, and considered from a rasterisation point of view, RTX 2080 has about the same horsepower as the GTX 1080 Ti.

Yet Nvidia is really, really banking on its forward-looking technologies to separate RTX from GTX. The 2080 variant makes a lot more sense if you're gaming with DLSS rather than TAA, where it pulls a 50 per cent lead over the 1080 Ti card. And that is the crux of the RTX 2080 evaluation: it needs to successfully leverage its all-new hardware in order to make implicit sense at its current price point. If it does, it will fulfil its inherent ability and become a much better card than GTX 1080 Ti.

Nvidia is therefore taking a calculated gamble that an array of games developers will integrate the necessary support for its RTX cards to truly shine. They are pregnant with performance promise, evidenced by the brief DLSS and ray tracing evaluation, and they will begin to make more sense as and when software catches up with all-new hardware.

We come away with the feeling that Nvidia's desire to improve the gaming experience has resulted in RTX cards leaving some potential rasterisation performance on the table, sacrificing it for tech that will provide game-changing jumps in the future. Revolution, not evolution. 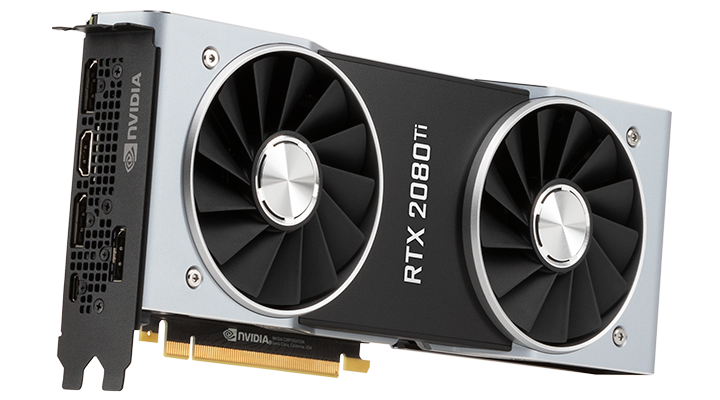 A full range of Nvidia GeForce RTX graphics cards are available to purchase from Scan Computers.

MrJim
Impressive performance…but what a price! Are there really that many people willing to drop over a grand in order to play PC games?

I have started a review thread:

Some of the review sites have been quite positive and others not so much.

Apparently according to Asus,Turing was meant to be on Samsung 10nm but was backported to TSMC 12NM intsead(which is basically TSMC 16NM),so they had to go with mahoosive chips.
Posted by Tunnah - Wed 19 Sep 2018 14:33
Genuine question: historically speaking, has a new product ever charged the consumer for the performance gain over the previous product before ?

I'm having a hard time thinking of anything. Normally the new product gives you a performance boost, for a generally acceptable price increase on the previous product. It's never “this is 40% faster, so it's 40% more expensive” (it's actually more than that in this case).

I know we've passed on the good ol' days of getting new gen at the price of the previous model (200 to 600 were the same price! Near enough anyway) but this price increase is disgusting.
Posted by CAPTAIN_ALLCAPS - Wed 19 Sep 2018 14:34
It is a pity that Intel cannot get their graphics cards out to compete with this generation, given how much silicon looks like it has been dedicated to special features.

Whilst I really like the look of DLSS I would be much more tempted to buy 545mm2 / 754mm2 of pure current day graphics performance over promises (plus some more silicon wasted on raytracing, which I cannot see as anything more than a gimmick on this generation).
Posted by CAPTAIN_ALLCAPS - Wed 19 Sep 2018 14:37

CAT-THE-FIFTH
I have started a review thread:

According to Buildzoid, the 2080Ti board - notably the power delivery - is so well built that there is little for third party vendors to improve on.

So getting a third party release card - which is often a custom cooler on top of a reference board - is probably fine this time round.

The only problem is the outrageous price gouging.