You are here:
Storage Peripherals News

At the recent China Flash Market Summit (CFMS 2021) Kioxia presented some juicy information about the capabilities of PCIe 5.0 SSD prototypes. With the new gen interface and fast flash NAND, the drives were shown to be capable of incredible transfer speeds – up to 14GB/s (reads).

The current best consumer PCIe 4.0 SSDs available, offer max transfers of about 7GB/s, so it is clear to see that Kioxia's prototypes are making good use of the doubled bandwidth provided by the upgrade to PCIe 5.0 (doubled from 16 to 32Gbps per link). Of course, it isn't the only company working on PCIe SSD storage; we saw evidence of development progress from Samsung, for example, back in July.

Like Samsung's efforts, Kioxia's first PCIe 5.0 solutions are angled at enterprise, data centres and so on. This is why the samples were based on the EDSFF E3 and 2.5-inch U.2 form factors.

I/O performance figures are partially obscured by someone's head and the boxy CFMS podium in the main slide, below. Nevertheless, we can see the headlines that show random IOPS are 50 to 79 per cent improved as we cross PCIe generations here. Last but not the least read and write latencies show a very similar magnitude of improvement. 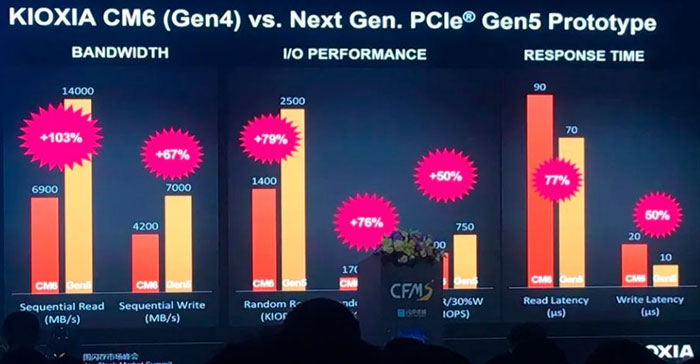 With these EDSFF E3 and 2.5-inch U.2 form factor SSDS, Kioxia is planning to integrate an eight-channel controller for the data centre drives, and up to a 16-channel controller for the more demanding enterprise models. Drive capacities on offer will range from 1.6TB to 30TB, with endurance ratings of one to three DWPD. Kioxia is going to be rolling out its next SSDs for certification and validation before 2021 is out.

Next month we are expecting Intel Alder Lake-S processors to arrive sporting DDR5 and PCIe 5.0 support, but these new Kioxia drives are squarely aimed at data centre and enterprise systems running the likes of Intel Xeon Sapphire Rapids processor based systems. We are yet to see any consumer PCIe 5.0 storage plans.